An optimistic view of media’s future

Justin Smith’s optimistic survival guide
Yes, Digiday often forthrightly emphasized the challenges of making it today in digital media. There are any number of issues that still confront digital media. But all hope is not lost. Justin Smith, CEO of Bloomberg Media, struck this note in his keynote address, in which he laid out a “survival guide” for publishers in the platform era. Many of Smith’s suggestions aren’t new: differentiate, focus on brand, build direct connections, be choosey with platforms, concentrate on brand ad dollars that have mostly not moved to digital.

The deviation arguably occurred during the high-growth platform era in which publishers outsourced their distribution and, in effect, strategy to Facebook. The rush to create live videos was an embarrassing example of this. Facebook wanted live video, so publishers fell all over themselves to create them. Many were able to cash Facebook welfare checks for their trouble. But this created a bad dynamic. The media companies creating Facebook live videos weren’t incentivized to focus on quality. Instead, in keeping with Facebook desires, they focused on spitting out a regular cadence of videos of dubious quality.

What Smith is seeing is this era coming to a close. Let’s hope. Instead, media companies can focus on lasting value and not chasing clicks and shares with lowest-common denominator content. There is, to be sure, a ways to go. Snapchat Discover remains a morass of Kardashian content that is far from differentiated. But all hope is not lost. Two media startups I’m excited about, for different reasons, are Axios and The Outline. Axios, which Smith called one of the most successful media launches in recent times, has already broken through with highly differentiated content, delivered in a good old-fashioned email newsletter. Here’s a clip of Axios CEO Jim VandeHei on steering away from the scale fever that infected media in recent years.

With The Outline, Verge and Bloomberg veteran Josh Topolsky is producing an eclectic publication with stories that are truly unique. The most interesting part of The Outline, however, is the ad formats. It has created Snapchat-like cards that are perfect for mobile. This is something to watch. The Outline has digital shop Code and Theory doing the card ads, so the question of scaling is always out there.

Now, for a bad sign
A top ad exec sent over this screenshot with a simple message: “A retargeted ad on what should be the most valuable piece of ad real estate in all of media. If i wasn’t still in this business, i could write an entire article about why this is so terrible for humanity.” 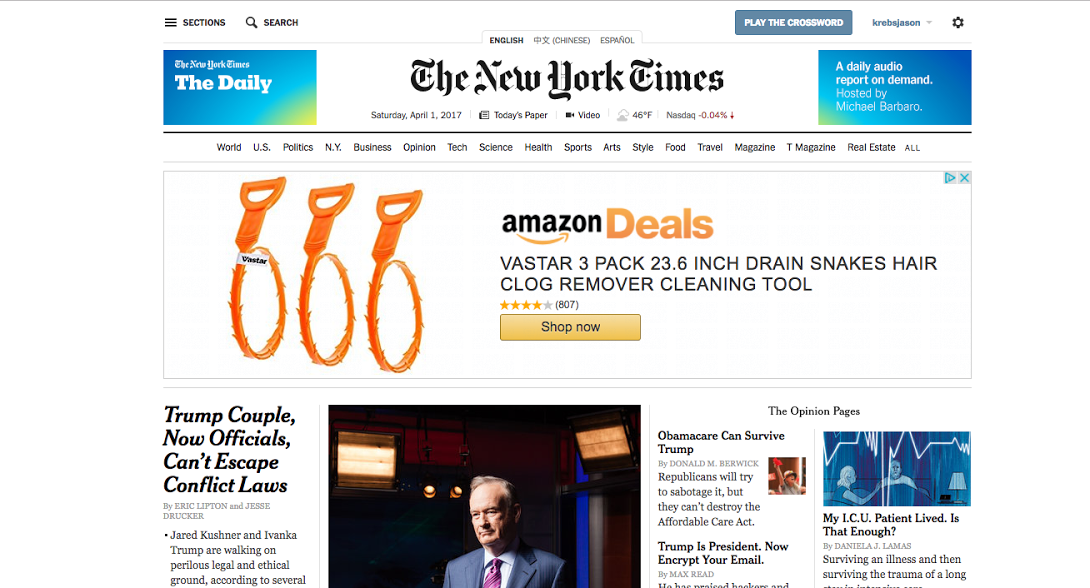 Will everything become performance marketing?
Google and Facebook won round 1 of the shift to digital, Smith said, and that was capturing direct response dollars. The opportunity, still, for premium publishers is to win the brand dollars still tied up in TV.

But the question becomes whether brand dollars stay that way. Many in Silicon Valley are most comfortable with direct response. They see an irrational, wasteful system in brand advertising. One exec I met with this week, a veteran of the major platforms, spoke wistfully of everything becoming performance marketing. With all the data at our disposal, and the march of machine learning, why should brand advertising be such a mystery? In this view, the app-install market is not a curious subset of advertising but a harbinger of how advertising will change in the future.

That will become the essential tension in this fight for brand advertising. Publishers will want brand advertising to remain somewhat nebulous while platforms will seek to redefine it on performance marketing terms — which by the way, only the platforms can win on.