Your grandmother’s favorite magazine is getting a makeover to ready itself for the digital age.

Trusted Media Brands, the publisher of titles including Reader’s Digest, Taste of Home and The Family Handyman, cut down the average time users have to wait before they can scroll on its webpages from 3.5 seconds a year ago to 2 seconds today, said Nick Contardo, vp of product and tech at TMB. The publisher did this by switching content management systems, increasing the amount of content it caches and reducing its ad calls.

In February, TMB began migrating its sites from the CMS TeamSite to WordPress. While WordPress is an off-the-shelf product that any publisher can plug into, its interface is more intuitive for digital publishing than a legacy product like TeamSite, which has existed since the 1990s.

With TeamSite, simple tasks like creating slideshows and embedding images became pain points, Contardo said. Having a more modern CMS allows the editorial and tech teams to make adjustments more easily whenever a snafu occurs. It also lets editors more efficiently use their time, which is why TMB listicles now include about 35 images on average, up from 15 on average with the old CMS.

Caching lets publishers temporarily store content so it doesn’t have to be loaded all at once. TMB built internal tools that compress and store images, which helped it increased the amount of content it caches.

About seven months ago, the publisher served a cached webpage to about 55 percent of its users, Contardo said. Today, about 80 percent of its users access cached pages. This has helped the publisher reduce the amount of time it takes to load the first byte of data that users encounter by 40 percent to 0.3 seconds, according to WebPagetest. Contardo said the speed bump has led to an increase in impressions and pageviews per session, but he declined to provide raw numbers.

TMB also got more judicious about the ad tags on its page. It audited its pages and found that it was still making calls for ad unit sizes it no longer uses, so it eliminated JavaScript related to old campaigns.

“We had a lot of really old code on the site,” Contardo said. “You save a few milliseconds off of [eliminating] each of those calls.”

Although no one would confuse Reader’s Digest with BuzzFeed and nothing TMB is doing under the hood will stand out to most digital publishers, the company’s push to modernize its sites comes at a time when legacy publishers are revamping their digital properties to compensate for reductions in print revenue.

Forbes cut back on intrusive interstitials and rolled out a new mobile site that decreased the amount of time it takes to render content by 4 seconds. After removing several vendors and shifting code from browsers to servers, Meredith saw a 20 percent increase in revenue per visit. The Financial Times also reduced the amount of time it takes to load its content by eliminating unneeded ad tech tags.

As seen in the chart below, TMB’s digital tweaks have coincided with a slight traffic bump throughout the past year. While its flagship publication Reader’s Digest is known for being a fusty magazine, about one-third of its audience is under 35, according to comScore. 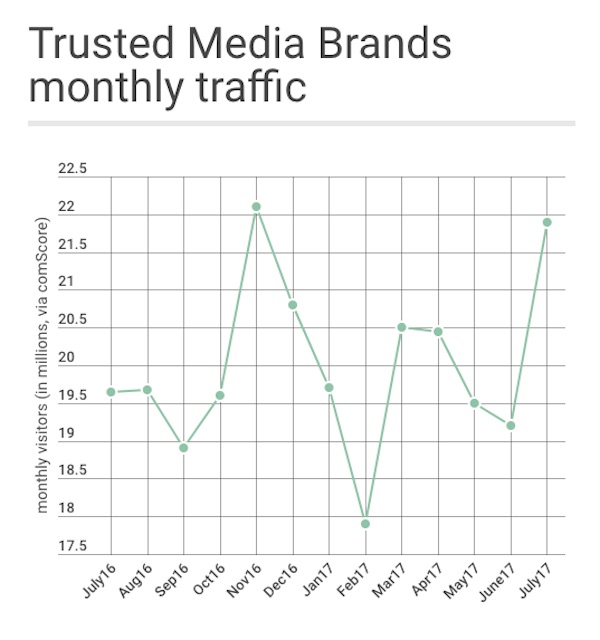