Reader’s Digest? The surprising places young people are getting their news

As marketers obsess with reaching young people, a rash of digital publications from Vice to BuzzFeed have sprung up to deliver them. Twenty-something readers may over-index with younger-themed media outlets, but they’re not rejecting the publications of their parents’ generation, either.

Consider: Fully 38.5 percent of The New York Times’ digital audience is 18-34, despite (because of?) their regular eviscerating trend pieces on them — up from 32.5 percent two years ago. Time.com is even more callow, at 41.5 percent. (All figures are comScore multiplatform.) Even Reader’s Digest, which for many represents their grandparents’ magazine, is one-third young adult — slightly higher than the internet population, and higher even than Vox.com, whose Gen Y readership is 32.6 percent.

“These sites are more popular than one might expect,” said Melanie Shreffler, who studies Gen Y as senior insights director for The Cassandra Report. “Just because they’re ‘old school’ or ‘traditional’ in terms of format and tone doesn’t mean they’re irrelevant to millennials.” 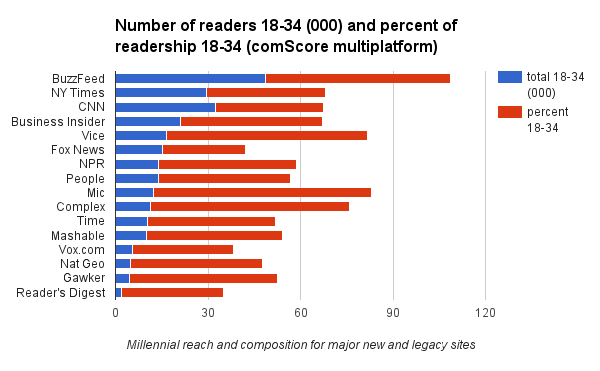 From a targeting and editorial planning perspective, it makes things simpler to put people in boxes. But with a cohort that spans 16 years (18 to 34) and is nearly 80 million strong, it doesn’t make sense to treat young adults like they’re a single, monolithic group.

Of course, most youth-focused publications have a higher concentration  and number of young readers. BuzzFeed, for instance, has 48.5 million, or 60 percent of its readers, who are 18-34.

But established publications often reach more people in that demographic by virtue of their total audience size. Young adults make up 35 percent of CNN’s audience, or 32.4 million. That’s twice the number reached by Vice. NPR and People, similarly, reach far more people 18-34 than Gawker and Mashable in sheer numbers.