Quartz rethinks the newsroom for the digital age 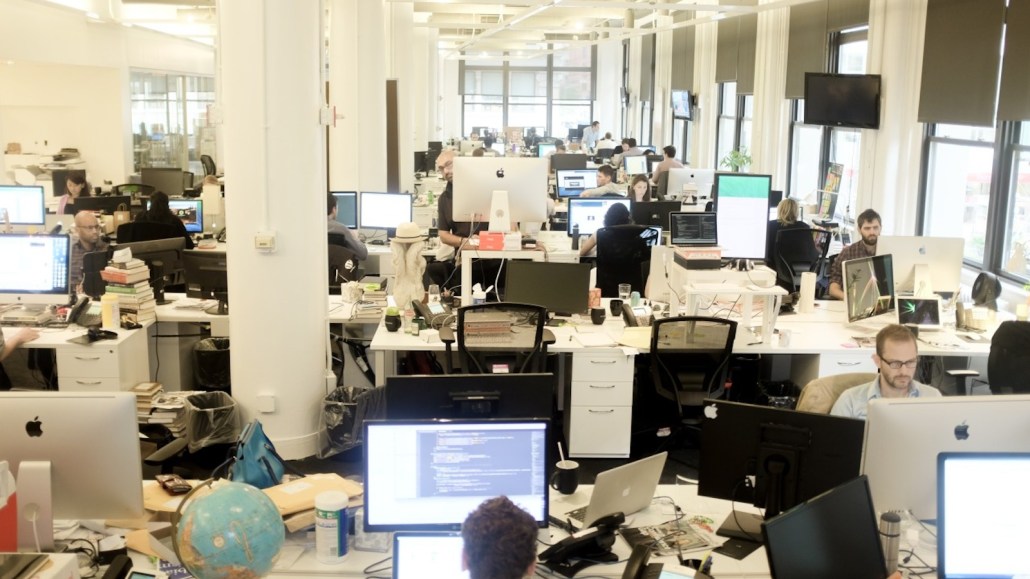 The Quartz newsroom quite literally flickers with technology. A lamp is rigged up to let staffers know when it’s going to rain (it was green on Tuesday, indicating it was safe to go out). Lights go on when the coffee is ready or the dishwasher is done. Sam Williams, the developer behind these gimmicks, is working with beacon technology to program employees’ phones so a customized tune will play when they walk in the door.

Whimsy aside, these features speak directly to founding editor Kevin Delaney’s vision of how a digital newsroom should be staffed. As established news organizations try to retrofit themselves with technology and also get digitally fluent staffers to achieve scale, Quartz had the advantage of being able to start from scratch, free of legacy issues. In its first year, its U.S. traffic reached 2 million uniques, putting it in the range of stalwarts like The Economist and The Financial Times; it’s now 3.9 million uniques, according to comScore.

At other news organizations, product reports to the business side, but at Quartz, Delaney and his co-founders created a development team that reports to him. Developers and reporters not only work side by side — in some cases, they’re the same person.

“The conviction I brought to Quartz was, we were most successful when editors and developers work together, and I wanted as much as possible to make that an everyday, unmediated thing,” said Delaney, who also serves as co-president. “My goal as one of the leaders of Quartz is that unmediated collaboration, brainstorming, is one of the ingredients for success going forward.”

The decision to eschew the job descriptions and silos that have governed traditional newsrooms follows from Quartz’s editorial strategy. When Atlantic Media founded Quartz two years ago, the goal was to create a mobile-first publication dedicated to serious reporting for a global business audience. Stories tend to run around 400 words; about half contain some non-text element, like a chart or a graph. Delaney, who was a champion for digital while at The Wall Street Journal before Quartz, believed that for this approach to succeed, product and news had to be closely integrated.

The clearest indication of this is the Things team. This is a four-person group in Quartz’s 36-person newsroom, headed by Zach Seward, one of Quartz’s original employees. Its members, which include David Yanofsky and Nikhil Sonnad, are called reporters, but the title doesn’t tell the whole story. Delaney likes the term polymaths; they all have some combination of journalism, coding or data-visualization experience, often self-taught.

They work on Chartbuilder, Quartz’s homegrown data-viz tool that Yanofsky created; help other reporters visualize their stories; and produce their own stories, like this interactive explainer on bitcoin, which was a finalist for a SABEW award for its “innovative approach to storytelling;” and this one on iPhone sales, one of Quartz’s most popular posts to date. Quartz wouldn’t give out figures, but said about half its top stories contain non-text elements.

“We don’t adhere to the preset roles you have in news organizations,” Seward said. “It prevents a myopic view of how stories need to be told. When you have the ability to think about how to tell a story differently, then it leads to more creative ways.”

The integrated approach extends to the rest of the newsroom. Developers and editorial employees sit face to face, working on products together and popping in and out of each other’s chat rooms.

The rest of the reporting staff, as you’d expect, isn’t just writing stories and handing them off to an editor. As has become increasingly common in the rest of the industry, they’re expected to be comfortable selecting and sizing their own photos, manipulating spreadsheets and creating their own graphs and charts using Chartbuilder.

It’s a testament to the physical openness of the newsroom and its entrepreneurial values that a handful of Quartz developers have written for the site. Among them is Yitz Jordan, a senior Web developer who worked on the site’s recent redesign and the launch of Quartz India. But he blogs on the side about hip-hop and LGBT issues, and was drawn to Quartz as the “perfect place for a developer who wants to be around creativity.” His first byline for Quartz came about when Mozilla CEO Brendan Eich stepped down amid his controversial support for an anti-gay marriage proposal. “Mitra [Kalita, former Ideas editor, now executive editor at large] approached me and said, ‘Do you want to say something about this?’” Jordan said. “I said, ‘Yes!’ It just snowballed from there.”