How Quartz brings editorial, tech and sales together for products 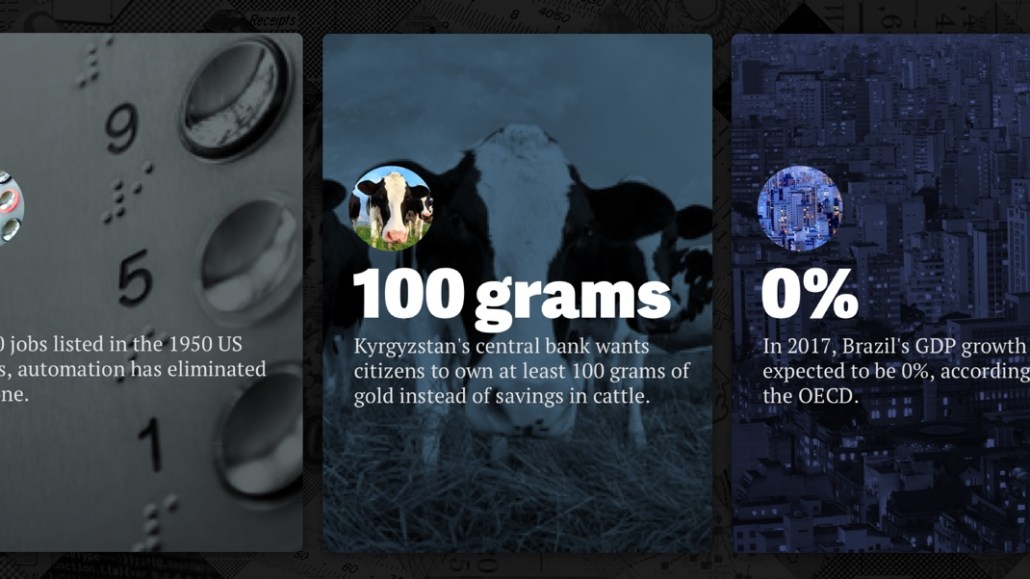 When it comes time to push a news product into its next phase, sometimes it helps to consult with one’s advertisers.

On Tuesday, the Atlantic Media-owned business news brand Quartz relaunched the Quartz Index, a product with card-style stories about statistics and data from the global economy. It includes contributions from Quartz editorial and the sponsor, financial services firm BlackRock. While both advertiser and publisher took pains to note that the Quartz Index is a news product that’s editorially independent, it’s an example of how publishers have to cater to advertisers in launching new news products.

The Index got its start in spring 2015, when Quartz began thinking about a new product designed to measure the new global economy. That fall, BlackRock sent a request for a proposal to sponsor editorial content about exchange-traded funds that would reach readers across digital channels, and a few months later, the Index had launched.

The pilot version was a page that showed visitors things like the number of commercial drone pilot licenses applications or daily Bitcoin transactions. It also included a statistic about exchange-traded funds offered by iShares, a BlackRock product. While Quartz editorial staffers picked the numbers, the look of the product was influenced by BlackRock.

“The Index was actually the response to a brief we wrote,” said Jason Hill, the global head of media at BlackRock, which has sponsored the Index since its inception.

The Index got nearly 15,000 email subscribers, with an open rate north of 40 percent, and it compelled BlackRock to renew its sponsorship.

But BlackRock also wanted some changes. “We saw how well the more interactive sponsored bulletins performed versus the more static, text-driven executions,” Hill said. “That led to a long discussion about formats and supporting richer kinds of content. The card-based approach was an editorial solve for that challenge.”

So today, in place of static indicators, there are 12 stories that cover a variety of economic indicators, like one on cryptocurrency or the number of jobs that have been replaced by automation. Two full-time staffers create content daily for the Index, along with freelance contributors. Quartz’s branded content team, Quartz Creative, works with BlackRock on branded content that can take different forms: the first piece that will launch features audio recordings of investors.

Those Index pieces – around two a day – still look different from other written Quartz content. None of Index’s content is bylined (for space reasons, according to Quartz’s svp of product, Zach Seward), though iShares sponsored content will be clearly labeled, and the Index team reports to a special projects editor, Lauren Brown. The Index will also be more tightly integrated into Quartz’s core properties, another response to a BlackRock concern, Hill said.

There is a lot about the Index that Seward hopes to integrate across the rest of Quartz’s products, like the card-based format. “Those results are going to inform whether to take it to other parts,” he said. “In our newsroom, you might start hearing, ‘How tappable is that?'”

But even if the tappable content doesn’t take off, that might not matter. As an editorial property that’s secured a year-long investment from an advertiser and funded experiments that can be applied elsewhere, Quartz considers it well worthwhile. “Great products create great ad products,” Seward said.