The publishers that take soft approach to fighting ad blockers

For publishers, it seems there are almost as many tactics for combating ad blockers as there are people running them.

A slight exaggeration, perhaps, but one method increasingly in vogue among media outlets is to simply find a way to show readers ads anyway. That’s the mission behind Pagefair and now Sourcepoint, a new “content compensation platform” that says it can save publishers’ bottom lines by restoring their blocked ads — or by inserting new ones entirely.

Sourcepoint CEO Ben Barokas said that the goal is to bring more transparency to the transaction between readers and publishers by letting readers choose the ad experience they’d prefer. One reader might prefer video ads instead of banners, for example, while another would rather take a survey once a week instead of seeing any ads at all. But that’s only the beginning.

“Ad recovery is just table stakes for us,” said Barokas, formerly of Admeld, which Google acquired in 2011. “What we’re really focused on is using ad recovery as an invitation to users to engage in a transparent discussion about their ad preferences and experiences.”

Many publishers simply use brute force. Sites like the U.K.’s ITV and Channel4, for example, have responded to ad blocking by preventing users from accessing their content entirely.

Others are taking a softer, more diplomatic approach by appealing to readers’ morality. Wired, for example, recently started asking readers who run ad blockers to turn them off. “Please do us a solid and disable your ad blocker. Thanks for supporting Wired,” read the banners that appear to readers with ad blockers on. Clicking on the image directs readers to a page with instructions on how to add Wired to ad blocker white lists.

“We know that they value our content, so we thought that a good starting point was to simply ask them nicely to support our business model,” said Hayley Nelson, Wired’s director of product management. “Nothing ventured, nothing gained.”

Nelson said that while it was too early to tell what effect the messages will have, she said that readers have told Wired that the message encouraged them to change their ways. Other sites take a similar approach: Imgur also asks users to turn off their ad blockers, while reddit periodically thanks readers for not blocking its ads. 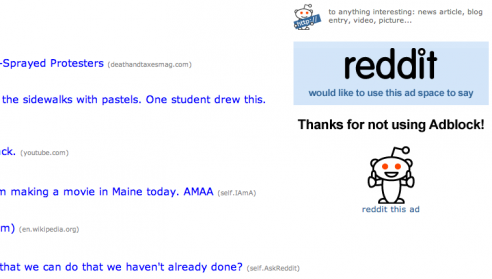 One thing these sites all have in common is their audiences, which are likely to be both young and digital-savvy — and hence more likely run ad blockers. Ad blocking rates on technology sites can run as high as 30 percent, according to Pagefair, which sells tech that circumvents ad blockers.

At the same time, those publishers also benefit from having high affinity among their users, which makes those users more likely to turn off ads. “Imgurians regularly leave us comments and feedback saying they are happy to turn off ad blocking,” said Alex Jakovleski, head of ad operations at Imgur.

Not everyone thinks being polite is the best approach. “We discovered that it just doesn’t work,” said Pagefair CEO Sean Blanchfield. “It takes a lot to get someone to reconsider a default setting, such as AdBlock Plus’ default setting of blocking every ad format, everywhere.” He said for most sites the most effective solution is to prevent users from accessing content until they turn off their ad blockers.

But before an industry standard emerges, expect the ad-block arms race to escalate.