Media outlets brace themselves for a post-election Trump hangover

Media companies might not like Donald Trump very much, but they sure love the traffic he’s brought them.

Slate’s Trumpcast, a podcast dedicated to the Republican candidate, has become one of its most popular, drawing 1 million monthly downloads. This month, traffic to Slate.com has been up 35 percent over the previous six-month average. At one point, the staff even had a beer-fueled debate about whether it should cease publication of all non-election coverage.

At New York magazine, interest in Trump has propelled a 75 percent year-over-year traffic increase to its Daily Intel news section in the past six months, said Ben Williams, New York’s digital editor. “Trump has been driving the news cycles,” he said.

Data from Keywee, a content marketing startup, confirms those examples. Overall, articles about Trump have higher click-through rates, shares and likes on Facebook than those about Hillary Clinton. A story about Trump garners more than eight times as many likes on Facebook than those about Clinton. (No wonder media self-criticism has focused on whether the media created Trump). Chartbeat data, shown below, shows that Trump has outperformed Clinton in media mentions and time spent on articles. 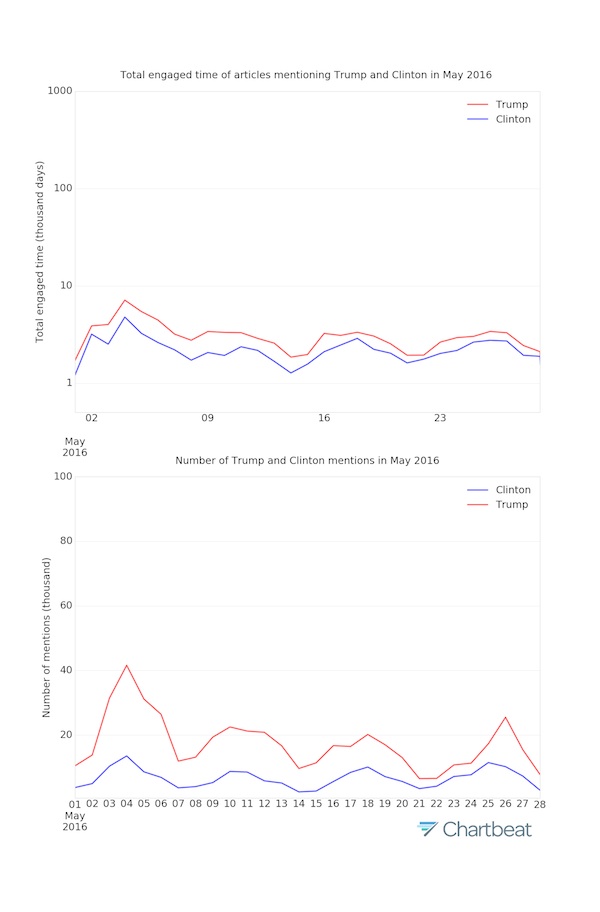 Come Nov. 9, though, it’s going to be a different story.

“It is going to be a little bit of waking up and saying, ‘What are we doing now?’” said Julia Turner, Slate’s editor-in-chief. “So many editorial resources have been focused on the election, and that’s true every four years, but the fervor of the interest is at a different level.”

According to NPR, CNN was expected to make $100 million in additional revenue this year thanks to audiences for its Trump coverage. Total ad spending in the United States is around $192 billion, driving about 24 trillion annual ad impressions, said Ben Kunz, svp of marketing and content at ad agency Mediassociates. If Trump mania increased all media readership/viewership by only 5 percent, he figured, that would equal 1.2 trillion additional ad impressions following Trump news. Assuming an average $8 CPM, that’s a $9.6 billion ad revenue increase to media publishers, he said.

“Trump is that sugar rush,” he said. “They’re making so much money with these rising audiences that are addicted to Trump news. The challenge for publishers will be, can they find a way to continue that addiction.”

Even digital publishers that can’t capitalize on Trump coverage because marketers don’t want their ads appearing next to controversial news can use the audience gains for bragging rights and can monetize it in the future through advertising and by exposing more readers to their brand. Publishers also are capitalizing on interest in Trump — oops, the election — by throwing paid events. Among them are The New York Times, which is going all-out with a $250-per-head Election Night event featuring its journalists and executives and cocktails, up from $85 it charged for a smaller event in 2008.

Publishers say they’re not too concerned that Trump traffic will vanish after the election. They figure people will still be interested in issues raised by the election, and that there’s a chance to convert those election readers into more regular visitors.

“Journalists are supremely equipped to handle hangovers, so there’s never a crisis when there’s a news hangover,” quipped media critic Jack Shafer. “Every reporter has a computer file of projects they want to get to when the campaign is over.”

Williams of New York magazine, for one, isn’t worried. “I think we’ll still have plenty to write about,” he said. “You’d be amazed how much traffic we get off ‘Game of Thrones.'”