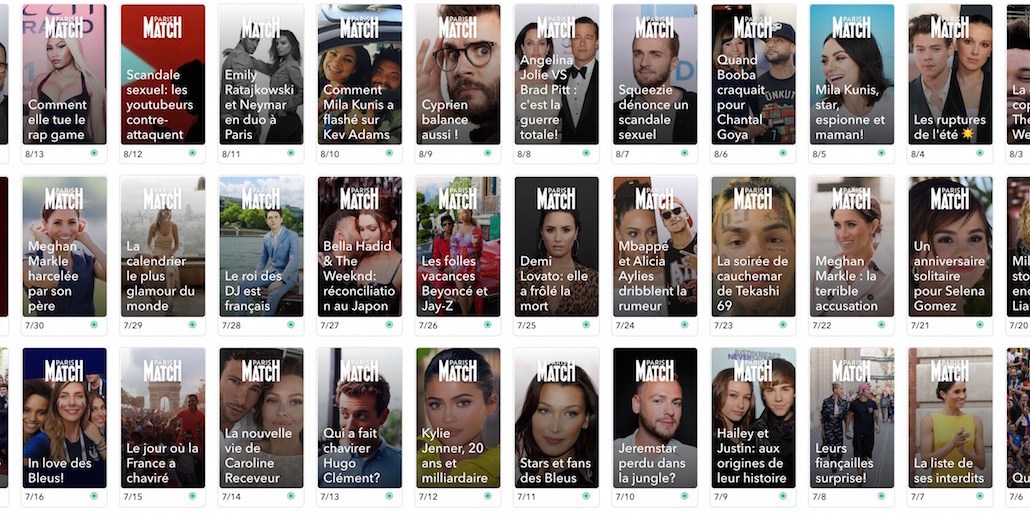 Regarded as a print institution in France, weekly news magazine Paris Match isn’t necessarily the most obvious choice for a Snapchat Discover publisher. Yet the 70-year-old title has spent the last two years developing its approach in order to reach a younger audience it wasn’t previously connecting with. Today, the magazine has over 7 million monthly unique viewers in France, up 20 percent in the last six months, according to the publisher. Globally Paris Match Discover has 9.5 million monthly unique users, according to the publisher.

Maintaining a wide mix of topics that mimic the publication’s editorial mandate, rather than focusing on specific areas, has been what’s kept Paris Match’s audience engaged, with 45 percent of them consuming content at least three times a week, according to Marion Mertens, digital editor-in-chief of Paris Match.

That means news as well as ever-green content that spans topics such as sports, politics, celebrity and lifestyle, regularly make it into the daily, 10-snap editions. “That mix of topics is why people are not fed up with the editions,” added Mertens.

Unsurprisingly, France winning the World Cup in June gave Paris Match Discover engagement a bump. French defender Benjamin Pavard, not previously well known in France because he plays for VfB Stuttgart in Germany’s Bundesliga, scored what became an iconic goal when France played Argentina in Russia. Paris Match finds sports personality profiles generate high interest on Discover, so it featured him and his girlfriend Rachel Legrain-Trapani (who is Miss France 2007) in an edition with a cover headline: “Pavard: The day that changed his life,” which subsequently generated a lot of engagement, according to Mertens.

But other more hard-hitting topics have also been popular, such as the mass anti-gun protests held in the U.S. in the wake of the Parkland High School shooting in Florida, international and domestic politics and terrorism. Softer content such as movie stars being interviewed about their latest films do less well as the audience perceives it to be more promotional and less authentic than the grittier storylines, according to Mertens.

All Paris Match’s snaps feature video, and the Discover team is figuring out what the ideal length is for each snap. “We struggle to know whether we should do an eight-second snap or a long-form with animation and swipe-up text. There are no recipes or rules. We have to play it by ear, and are still learning,” she added.

Paris Match has 90 editorial staff, a half dozen of whom are dedicated to creating content for Discover: four motion designers, a researcher and a writer. Other reporters regularly pitch stories for Discover, and the publisher also recruits a lot of interns to ensure its Discover content regularly gets input from younger writers who understand what will appeal to the 13- to 18-year-old age group on Snapchat, said Mertens. Transporting Paris Match’s print heritage as a strongly visual photographic journalism-led magazine, to Discover has been critical to creating a strong brand on the platform, added Mertens. Editions will always focus on the human-interest stories behind the news, rather than the event itself — in keeping with the print magazine.

Snapchat Discover has long been regarded as a vital way of reaching new, and younger audiences, but the monetization has yet to catch up to the editorial success, and France is no exception. Unlike in the U.S. where some Discover publishers are paid a licensing fee, Paris Match has only ever had an ad revenue-share model. An ad is inserted every three snaps in an edition, though revenue from this isn’t enough to be able to expand the Discover team or budget.

“The monetization is minimal for the moment,” said Martens. “We can finance our little team but we wish we could have more money through advertising to spend more on motion design and writing and photography. So it is a good start, but there is an issue with monetization which having more ads in the editions would help with.”

Snapchat Discover’s France debut was a little different to other countries like the U.S. and U.K. Although it had around 8 million unique users in 2016 (out of an internet of around 55 million, according to Statistica), Snapchat Discover wasn’t as well known as it thought it was by the media and advertising communities, according to Mertens.

“Snapchat thought everyone knew them and were familiar to the platform — but they’re weren’t. A lot of sales people didn’t know them.” That may also be what has held back the advertising revenue also, though Martens added that Snapchat’s 20-person team in France has worked at changing that. “It’s a very satisfying partnership,” she added.

Paris Match’s print readership is strong with approximately 600,000 copies circulated a week, according to its parent company Lagardere, to a customer base that averages between 35 and 55 years old. But to ensure the magazine sustains its readership it needs to tap into that younger audience who doesn’t read its website or magazine. Paris Match’s Discover audience ranges from 13 to 25 years old, according to Mertens. That means Snapchat will remain a priority for the publication, she added.

https://digiday.com/?p=299383
Most Read
Trending in Publishing in the Platform Era
Digiday Top Stories