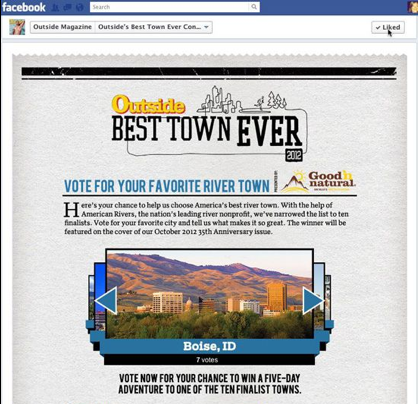 Many things can go terribly wrong when a media company turns to the online universe for content. But that didn’t stop Outside Magazine, a publication focused on the great outdoors, from tapping its audience for its first “reader issue.”

Publishers turning to the audience for content is a growing trend, as publishers look for ways to involve readers more in the social era.

Outside worked with social media marketing platform Friend2Friend to create a Facebook app allowing the publication’s Facebook community to vote on their favorite towns by submitting comments and photos. Outside’s editors selected 70 towns to choose from and let its fans decide the top 10. In years past, the editors chose the top 10. More than 20,000 people voted and Richmond, Virginia walked away with this year’s title. The outlet did write ups for each of the towns based on specific user suggestions, like bars, hiking trails, rivers. All that content came from readers directly posting comments on Facebook.

“The October issue is our 35th anniversary and we didn’t want to do a look back, instead we wanted to look ahead” said Ryan Krogh, Outside Magazine’s research editor. “Thinking about the things that allow us to look ahead, the thing we came up with was readers.”

In addition to the 20,000 votes, there were about 1,400 photo submissions, as well as around 6,000 comments, indicating a high level of engagement. According to Roger Katz, CEO of Friend2Friend, half of the people participating were voting and submitting via their mobile device.

Facebook offers brands the first branded community online and at scale where an outlet or brand are directly connected to readers and fans in a way you can get information to them and provide experiences to them. Perhaps as importantly, fans can tell stories about a publication or brand and tell experience they had to friends.

“It can happen at a scale that’s meaningful,” Katz said. “Instead of a poll asking 100 people, thousands of people can submit enough to create a popular cover issue.”

Beyond scale, Facebook affords multiple degrees for freedom in the types of experiences a publisher can serve: not just an interactive experience, but an experience that looks and feels like the publication. For Outside, a reader can see the type of editorial content they’re familiar with, see write ups and pictures of those towns.

“It’s one thing for a user to vote, and then another for them to go to the trouble to add comments and submit photos,” said Katz.

According to Krogh, the success of this campaign will lead to additional crowd sourcing content. It’s just a matter of them figuring out how they want to do it, said Krogh.

“For us, we were a bit reticent to turn over this entire issue to readers and just because as editorial staff, we like to curate and put our stamp on it,” Krogh said. “And while opening it up to readers is great, it can also be a free for all at times and a popularity contest in ways with no direction behind it.”