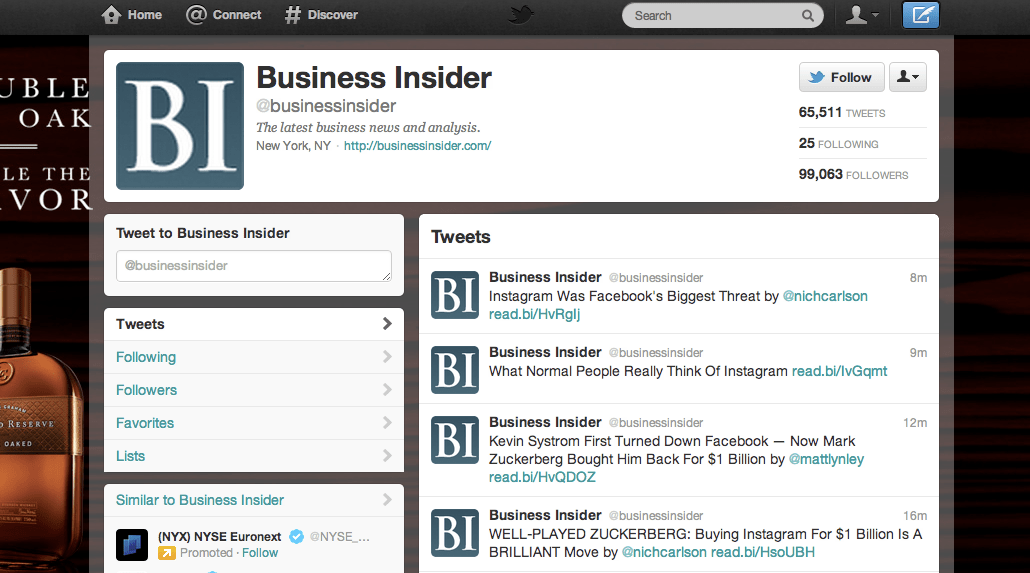 It seems like publishers will pretty much turn anything — photos, hyperlinks, any empty space on a page — into an ad nowadays. It only stands to reason that Twitter backgrounds might be used as billboards.

Henry Blodget’s Business Insider has rented out its Twitter background to  Woodford Reserve, a high-end liquor brand. This is the third time BI has run such a campaign, which has always been add-ons to larger efforts on the site. It ran previous campaigns last year for Starbucks and Chivas.

It’s a novel approach that might help close a deal, but Twitter backgrounds are hardly going to be the next great ad vehicle. For one, not many people actually visit a publication’s Twitter page. There’s also no way to measure how many people see the message, which is a non-starter in digital media.

But according to Julie Hansen, president of BI, the effort is a way for a publisher like BI to offer a social component.  According to ComScore, Twitter drives .3 percent of traffic to Business Insider. The outlet says that its internal numbers say between 3 and 5 percent. For comparison, ComScore has Twitter driving .3 percent of traffic to Forbes and .2 percent to the New York Times.

“Our audience is so social compared to our peer set, and because that’s the characteristic of our audience, we think how to put to social to work for our advertisers,” she said. “For a high-end liquor brand, that’s impactful.”

One thing to note: The rules around liquor ads (e.g., age block) make it tough for them to be aggressive online. According to Hansen, liquor companies need to be forward thinking in how to advertise on a publisher’s site. An ad on a publisher’s Twitter page might be a way for alcohol brands to deliver their messages in a different way.

This is part of a larger relationship with Woodford. The campaign, which started in mid-March and runs through the end of April, is part of an integrated package. Woodford runs ads on the site, as well as some sponsored-content packages.

Business Insider hasn’t had any push-back nor a “flood of advertisers wanting to try it,” according to Hansen. The publisher is approaching this technique sparingly and carefully. BI is bringing on Pete Spande as its first-ever chief revenue officer, charged with finding innovative ad formats. This is an effort to work with an advertiser on something unique, Hansen said.

“It’s hard to be social and polite in regards to user experience,” she said. “This is a solution to those goals.”