It all started when Minaj took to her personal Twitter account, as one does, to vent about not getting a nomination for MTV’s Music Video of the Year Award for her iconic “Anaconda” video, which garnered 19.6 million views within 24 hours of its release — a Vevo record.

“If I was a different ‘kind’ of artist, Anaconda would be nominated for best choreo and vid of the year as well,” she tweeted. (The video was, however, nominated in the Best Female Video and Best Hip Hop Video categories.)

U couldn’t go on social media w/o seeing ppl doing the cover art, choreo, outfits for Halloween…an impact like that & no VOTY nomination?

If your video celebrates women with very slim bodies, you will be nominated for vid of the year

Active Twitter user and popular singer Taylor Swift perceived that as a subtweet since her “Bad Blood” video was nominated for the marquee award. The video inched past Minaj’s previous Vevo record and amassed 20.1 million views within the first 24 hours.

@NICKIMINAJ I’ve done nothing but love & support you. It’s unlike you to pit women against each other. Maybe one of the men took your slot..

@NICKIMINAJ If I win, please come up with me!! You’re invited to any stage I’m ever on.

Minaj then said she wasn’t talking about Swift, so shush:

Huh? U must not be reading my tweets. Didn’t say a word about u. I love u just as much. But u should speak on this. @taylorswift13

With Swift jumping into the conversation and seemingly making it about her, Minaj and Team Minaj (her fans) said Swift’s comments were clouding Minaj’s point about racism in the music industry. Minaj retweeted fans echoing that point:

.@taylorswift13 stop using “support all girls” as an excuse to not be critical of racist media that benefits and glorifies you

nicki was making valid points about the history of racism in the music industry, taylor should be standing by her not making it about her

I’m baffled as to WHY @taylorswift13 felt the need to come at @NickiMinaj for speaking on behalf of unsung black female entertainers..

The tiff eventually died down, but Twitter users remained riled up about it. Both “Nicki” and “Taylor” trended on Twitter, with the former collecting 641,000 tweets per Topsy and the latter totaling 482,000 tweets, respectively.

CNN dissects what the fight boiled down to:

Many said the stars’ exchange showed a double standard: Swift was widely praised as brave for speaking up about problems in the music industry last month — now Minaj was getting lashed for doing the same.

Nicki was making an important point, they argued: Not all women’s experiences are the same, but black women don’t often get taken as seriously. Users expressed disapproval with the contrasting way some media portrayed the respective artists: Taylor Swift — beautiful, pure; Nicki Minaj — hysterical, angry.

Twitter data from Brandwatch revealed that the sentiment was even between the two because of their language, like “love” is difficult to analyze. “It is clear many people thought Swift should have thought through her tweet more, or stayed out of the conversation altogether,” said analyst Kellan Terry.

Interestingly, although Minaj’s Twitter following is a third of the size compared to Swift’s (19.8 million vs. 60.8 million), Minaj’s Twitter handle and hashtag (#NickMinaj) were tweeted more, perhaps showing that Minaj’s fans are more passionate and dedicated to their queen.

When the data is broadened across the Internet, including Facebook and Google sentiment, more people were talking about Swift than Minaj, though — but they were fiercely negative about her, according to 30dB Opinion Search. 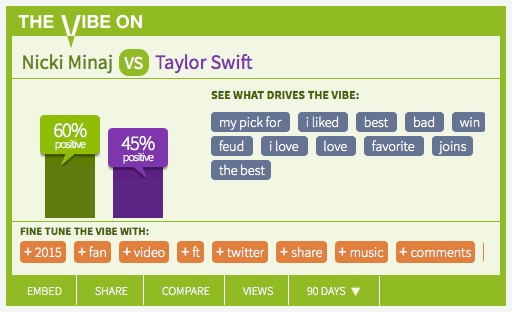 And of course, many were tempted to make a “Bad Blood” joke in relation to the Swift-Minaj kerfuffle. Data from Amobee Intelligence shows that 70 percent of tweets across digital outlets and social media related to the song.