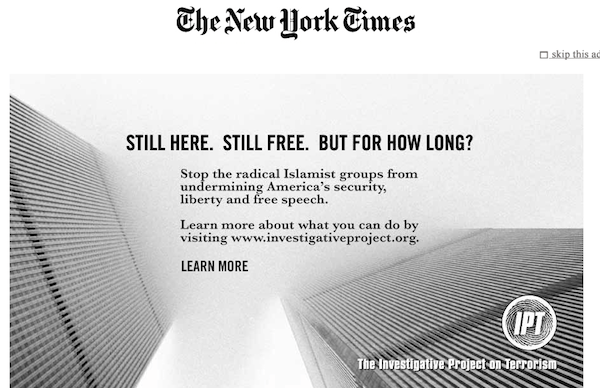 The controversial ad for a right-wing group that The New York Times published online today (and in print yesterday) has been tweaked to soften its language. The ad that originally attacked “Islamic groups” now specifies “radical Islamist groups.”

The Investigative Project on Terrorism ran the takeover ad on the Times homepage this morning. Here’s how it looked then:

Here’s how it looks after the update:

“We think the phrase ‘radical Islamists’ would have been better than ‘Islamists’,” a Times spokeswoman told Digiday. “The advertiser agreed to the change and the ad has been updated on nytimes.com.”

The spokeswoman said the decision to ask for the change was made internally.

The IPT, however, said the Times demanded the change after being “inundated with customer complaints and pressure from the publisher.”

“The IPT in no way, shape or form criticizes mainstream Muslims or Islam,” the IPT said in a statement provided this evening. “The ad specifically lauds those Muslim voices who criticize the radicals.”

Clicking on the ad takes readers to the IPT’s site, where the organization is still using the original language.

“We wrote a letter to the Times and basically said, the worst thing he said about us was we refused to link Islam to terrorism,” Hooper added. “We love Islam and we believe it is not linked to terrorism.”

CAIR pointed out in its letter to the times that IPT’s Steven Emerson is “the ‘expert’ who claimed the 1995 bombing of the Murrah Federal Building in Oklahoma City was a reflection of ‘a Middle Eastern trait.'”

Emerson had also attacked CAIR, the nation’s largest Muslim civil rights and advocacy organization, for asserting that “Islam is not the problem; extremism and violent extremism is the problem” when it comes to terrorism.