While the biggest Instagram accounts belong to celebrities, one of the biggest publishers on the platform, National Geographic, has shown that a traditional publisher can play that game, too.

National Geographic started its account three years ago, and today it has 25.2 million followers. Its growth has accelerated in the past few months; in May, it had 19 million followers. It’s the 13th biggest account on Instagram, according to SocialBlade. But according to social media tracker NewsWhip, it had the second-biggest engaged page in June, with more than 131 million likes and comments, putting it comfortably ahead of megastars Kylie Jenner, Justin Bieber and Taylor Swift. (No. 1 was humor publisher 9Gag, with more than 171 million likes and comments in June.)

National Geographic achieves these huge numbers in large part by giving its 90 photographers and freelancers the password to the account. They use it to post photos they’re taking while on assignment or just from their everyday lives, giving each other at least an hour between posts. “People don’t hog,” said Declan Moore, chief media officer at National Geographic. “It’s an amazing group with mutual respect. It’s self regulating.”

The posts regularly get hundreds of thousands of likes and thousands of comments — a testimony to the fact that the brand’s famous nature photography is tailor-made for a visual platform like Instagram. Also, as it is for all Instagram accounts, there are limited ways users can interact on Instagram. Unlike Facebook, you can’t share posts, and your likes don’t show up in other people’s feeds, so there’s no disincentive to hitting the like button over and over.

The account gives National Geographic a way to reach a wider audience beyond that of its monthly magazine or other media properties, on a platform that’s popular with millennials, Moore said. And while National Geographic doesn’t see the account as delivering tangible benefits, it could help the nonprofit drive new memberships.

For a more direct monetary benefit, National Geographic is looking to its Travel, Adventure and My Shot accounts to support larger ad campaigns. Here’s an example of a post Nat Geo did for Visit Florida. 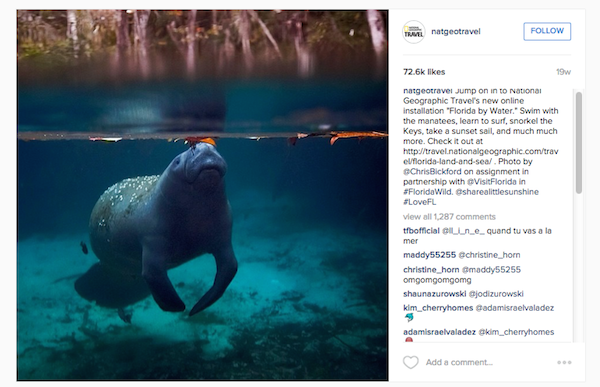 Here’s another it posted as part of a campaign for Go RVing. With the user-driven account My Shot, Nat Geo foresees asking users to post their own photos on a given theme as part of an ad sponsorship. 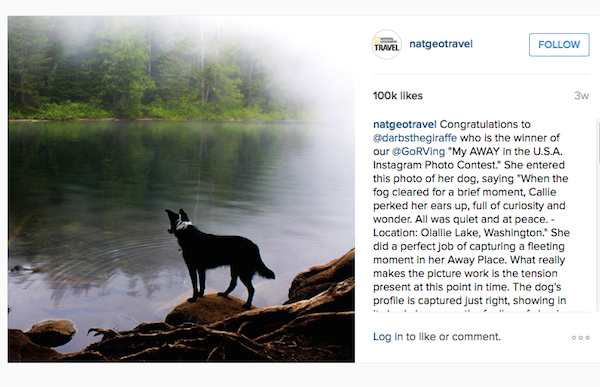 Edward Kim, CEO of SimpleReach, which provides social distribution and performance services, said the National Geographic example shows the evolving nature of success on social platforms, where publishers can monetize their audiences just as celebrities or “influencers” do.

“Instagram wants that content,” he said. “There’s this entire economy that they’re making no money off of, so they’d naturally look for way to capitalize on that.”

As for whether Nat Geo will consider using the main account to push memberships or advertising clients, Moore’s answer is a firm “no.”

“The large part of why it has been successful is that we’ve nurtured and allowed it to grow in a very pure kind of way,” he said. “It is the world’s best photojournalism, delivered on a moment-to-moment basis. There is value to that. That’s helped fuel the growth of the account itself.”