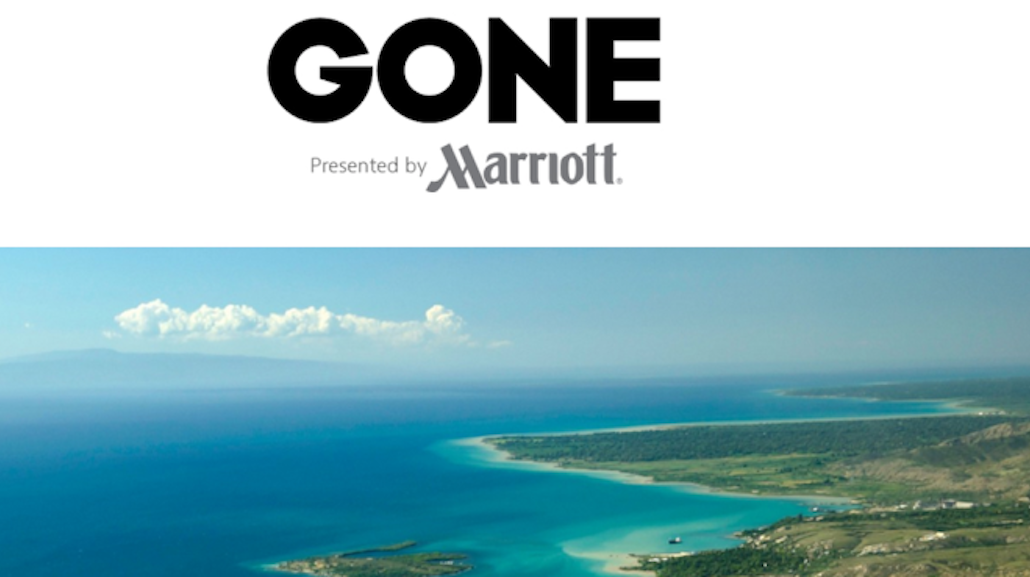 Medium, the 2-year-old site created by Twitter co-founders Ev Williams and Biz Stone, is still finding its footing as a platform publisher. Traffic has varied, from below 1 million to close to 3 million uniques a month, according to comScore multiplatform stats. While it has hired big-name journalists to report and write for the site, 99 percent of the 1,200 stories it posts daily still come from unpaid contributors.

The business model is starting to take shape, though. Today, Medium is launching Gone, a new travel vertical with Marriott International. This is the second vertical that Medium has launched with an advertiser, the first being its six-month pact with BMW on design-focused Re:form, which was launched over the summer.

The model blends the native advertising and paid sponsorship approach. In the case of Gone, the plan is for Medium to publish 60 stories over four months. Five of the pieces will loosely be about Marriott and identified as being published by Marriott. The rest will be produced by Medium, which hired Jamie Pallot, a seasoned editor whose editorial credits include Style.com and Condé Nast Digital, as Gone’s editor-in-chief.

All 60 stories published will be labeled “presented by Marriott.” Marriott and Medium agreed on the theme of the articles, and Marriott will be able to review the five articles it’s publishing under its name. It’s easy to imagine Gone followed by other verticals in other subjects that lend themselves to advertisers, like cars, tech and food, generating income to support commissioned pieces.

In addition to showing that Medium finally has some financial momentum behind it, the vertical also gives a boost to an effort by Medium and various other publishers to replace clicks with more meaningful metrics. As with BMW, Medium is guaranteeing Marriott an aggregate amount of time people will spend with them. Marriott, in turn, is paying the production costs associated with the articles and will use its social networking accounts to push out the articles.

Neither party would disclose the financial terms of the deal, but for the first article, a series about business growth in Haiti, where Marriott is opening a new hotel, Marriott paid for two Medium journalists to spend a week in the country and use helicopters to get photos and video footage. Future articles will cover the locavore food scene and “non-hipster” Brooklyn.

Advertisers aren’t ready to throw away the click en masse and buy solely on an engagement basis. But Edward Lichty, corporate development and strategy at Medium, said he’s bullish on the time-spent model, noting that in the case of BMW, Medium has delivered more than twice the time spent than it promised.

“At least for now, this kind of partnership is how we see ourselves working with brands,” Lichty said. He added that Medium is also considering having brands sponsor articles in Medium’s existing verticals. “This is the way we think we can support publishers and writers.”

For Marriott, which has been an early adopter of technology, using Oculus Rift to let guests take virtual reality tours of other cities, the Medium venture is a way for it to reach “next-gen, tech-savvy” travelers on a site that is designed around engagement. Marriott recently opened a content studio, and the Medium vertical is right in line with its claim of being “the world’s largest publisher” of travel lifestyle content.

“It’s not as big as some publishers, but it stands out because of the depth of its writing,” David Beebe, vp, creative and content marketing for Marriott, said of Medium. “It’s got great contributors, the ability to present content in many formats. And it’s around time engaged. There’s no banner ads, there’s nothing interrupting you. It allows us to build a deeper relationship with the reader.”