Is this a preview of Medium’s business model? 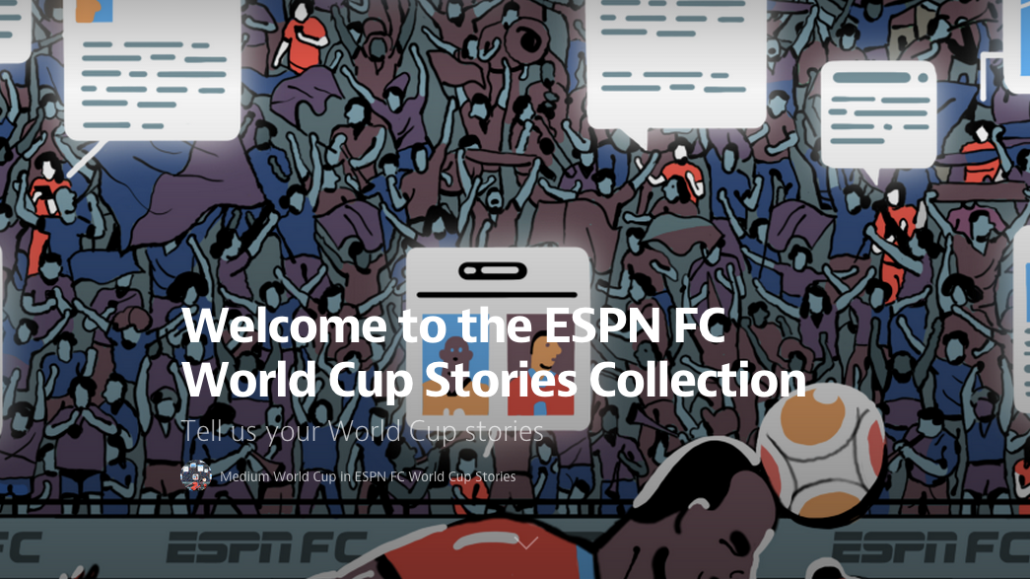 In a move that suggests possible monetization plans for the future, blogging platform Medium has teamed up with ESPN’s soccer network to build a new place for fans to write and read about the sport in the run-up to the 2014 World Cup.

“If you’ve got something to say about the World Cup, this is where you’ll want to say it,” Medium announced on the project’s landing page last week. “Anyone can publish stories in the ESPN FC World Cup Stories collection. We’ll be reading. If we really like your post, we’ll add it to the ESPN FC Editors’ Picks collection, which will be featured on Medium and ESPNFC.com.”

The World Cup Stories page will be collecting user-written material over the course of the next six months, the best of which will be curated by ESPN editors — it’s free content for the sports network and a big boost for Medium, the new platform launched by Twitter founders Evan Williams and Biz Stone.

“Sometimes you see brands getting on platforms, and it can feel forced,” said Edward Lichty, head of corporate development and strategy at Medium. “This gets right to the heart of what Medium is. The fact that we’re in partnership with ESPN hasn’t changed that. It’s organic and natural to what was already happening on Medium.”

ESPN, a Disney property, declined to comment on the arrangement.

“They felt that Medium was a certain type of engagement that would make sense on ESPN,” Lichty speculated. “They don’t have a platform for people to this. It wasn’t going to look the way it would on Medium.”

It does look pretty. The design, like much of Medium’s look, is big, clean and modern — perfect for enticing would-be writers in search of a safe, inviting environment to express themselves.

It’s also unburdened by ads. There is no clear business model at the site yet — and it’s not divulging any plans for how it might make money going forward. Medium will not even disclose how many users it now has, 16 months since launch.

“We’re very happy with where we are. Our focus today is probably less on maximizing growth than it is evolving the product and seeing how much value we can deliver to readers and writers,” Lichty told Digiday. “We’re still developing this thing.”

But if the ESPN partnership is a hint of things to come, one can imagine big brands eager to present sponsored content on the platform or buy space on Medium’s pages in order to collect user-generated content relevant to them. The question is whether the more earnest among the Medium’s amateur scriveners would tolerate it.