Advertisers are shifting budgets quickly to programmatic channels. So much so that eMarketer projects that more than half (55 percent) of digital display advertising will be sold programmatically this year. Local newspapers and broadcasters are also jumping on the programmatic bandwagon, if more slowly.

Local publishers have identified this opportunity, as a Borrell survey bears out. The firm asked 154 ad managers from online publishing at local newspapers, broadcasters, phone directories and pure-play digital companies. More than two-thirds said they do at least some programmatic selling. How committed they are to the strategy remains unclear, though: More than half (55 percent) said they had no full-time programmatic employees.

And publishers at the local level share the similar concerns to their corollaries on the national stage about programmatic commoditizing their product, undermining their direct sales relationships and CPMs dropping.

While it’s true that local sellers probably trail national media in adapting to programmatic, it doesn’t have to be detrimental to their business, said Rick Ducey, managing director at BIA/Kelsey. Properly trained, local sellers can use the time freed up by automation to spend building client relationships, he said. “Programmatic does not mean you’re going lose your job. It does not mean a race to the bottom.”

Programmatic isn’t the only change local publishers have to contend with. Mobile is also changing the business. BIA/Kelsey forecasts that mobile will grow to $6.7 billion from $4.3 billion this year and reach $18.2 billion by 2019. That will make mobile the fourth-biggest local media category behind direct mail, TV and pure-play online.

Mobile has its growing pains. Take newspapers: Their digital audiences are growing, but most are getting just a small portion of their revenue from digital advertising. And those digital audiences are becoming more mobile, where the ad rates trail those of desktop, according to the Pew Research Center’s State of the News Media 2015 report. The mobile-only newspaper audience has risen sharply over the past year, while PC-only newspaper readership has ebbed, according to the Newspaper Association of America. 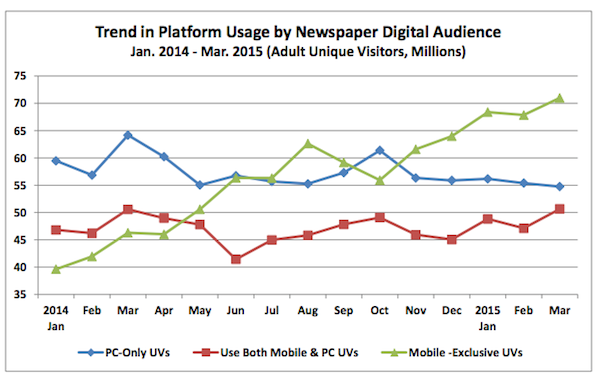