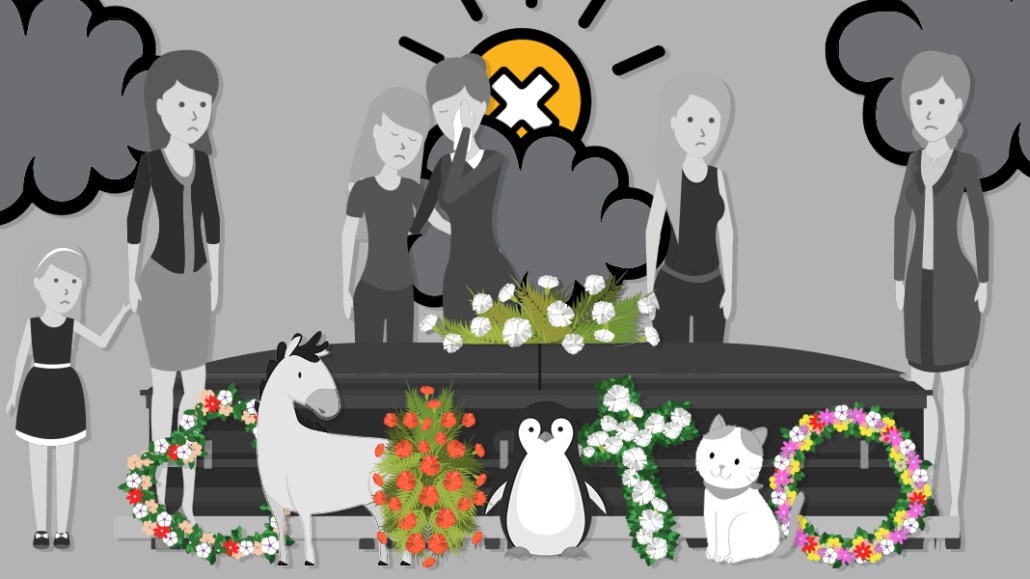 It was two years ago at the Cannes advertising spectacular, a week of peacocking, drinking and schmoozing on the French Riviera. And on a corner of the Daily Mail yacht, there was LittleThings, hosting a late-afternoon pick-me-up with hand massages and nail touch-ups, and, of course, rosé. It was a modest affair by Cannes standards, but it showed the aspirations of the then 2-year-old media company.

LittleThings, which started as a pet supplies e-commerce site, became a poster child for astonishing audience growth, topping 50 million uniques in three years by sharing inspirational stories on Facebook about people and animals doing heroic things, among other inspirational content aimed squarely at Facebook’s sweet spot: middle-aged women. The formula thrived for a while as long as Facebook rewarded it and other clicky content sites with referral traffic. Facebook even touted the company in its case studies.

CEO and founder Joe Speiser brushed aside comparisons to fast-growth Facebook publishers like Upworthy and ViralNova. This time it was different, since LittleThings was an original content publisher — and Facebook needed publishers like LittleThings that drove engagement on the platform. As Facebook changed — emphasizing video, in particular — so too would LittleThings. “As long as you constantly pivot within the Facebook ecosystem, you’ll be fine,” Speiser said on the Digiday Podcast in May 2016.

That turned out not to be the case for LittleThings. When Facebook decided earlier this year it wanted less publisher content in the news feed, LittleThings’ traffic and engagement plunged. Speiser and Gretchen Tibbits, the company’s president and COO, announced Feb. 27 to their 100 employees that after attempts to sell fell through, the company would close.

The publisher is now a cautionary case study in relying too much on a giant distribution partner whose priorities might not line up with yours. Speiser and Tibbits have fans, both within LittleThings and in the broader industry. They were known as levelheaded media operators who focused on the details of the business and gave the internet a counterpoint to the often negative news of the day. Yet it was not enough.

The business model was intrinsically risky. LittleThings decided early on to ride a tiger, in its case Facebook, only to have the tiger turn around and eat it. LittleThings only grew as big as it did because of Facebook — but it couldn’t find that audience elsewhere when Facebook choked off its reach.

“We would never have reached this scale without a platform,” Tibbits said. “If you look at this target, women over 30 in Middle America, it’s on Facebook. And we did explore OTT and SEO and Instagram and Pinterest, but we haven’t been able to monetize those materially.”

“Joe is a smart guy, and the fact that he couldn’t adjust the business away from its reliance on Facebook speaks to how difficult that transition will be for other social publishers,” said Chris McLoughlin, LittleThings’ former CRO. “Facebook can be a terrific partner, but when a publisher rents all of its audience, it puts itself in a terribly vulnerable position.”

For a while, LittleThings weathered Facebook’s changes. In the summer of 2016 when Facebook rooted out clickbait, LittleThings evolved its curiosity gap headlines to include more information. It ruthlessly A/B tested posts to make sure they’d perform well on Facebook. With dark posts, LittleThings could get the benefit of showing highly engaging posts to only certain parts of its Facebook audience, out of sight of advertisers who might think posts about, say, medical issues were less than wholesome. Mastering those tactics ironically might have led to a false sense of security — and all those tactics would eventually fall out of favor on Facebook.

“I think people were a little wary of being so tied to Facebook and its whims and about the potential of that being the main source of our traffic and revenue,” said Meghan Holmgren, the former managing editor. “But everything I heard from Joe or Gretchen was, we have a great relationship with them.”

In 2016, that confidence led Speiser to move the company out of cramped offices near New York City’s Herald Square to a sprawling space in the newly built Hudson Yards development complex, complete with digital startup trappings like a pingpong table, video games and organic coffee. LittleThings didn’t take VC funding, so it may not have made the mistakes other media companies have in spending way beyond their means, but LittleThings also operated in anticipation of a big digital video payday. The new space had one studio just for Facebook Live, chasing that latest Facebook initiative, doubling its budget in 2017 to create 13 shows.

Among them were daily talk shows like “The Daily Glow” that aspired to be like “The View” and weekly programs such as “Slice,” “The Hostess Next Door” and “Oh, Baby!”

Some of that production level, ironically, was meant to help LittleThings diversify off Facebook. It started distributing those live shows on OTT platforms like Amazon, Apple TV and Roku. The money would come from advertising sold by those distributors. But the scale of those audiences is still nascent, so the money wasn’t material, Tibbits said.

LittleThings also wasn’t quick enough to diversify its ad revenue. It started to sell direct and branded content to supplement its programmatic base, hiring 30 people, and got some praise from the market.

“I think the algorithm change is 100 percent the reason they are shutting down — they were a great partner, and we always saw success with their campaigns,” said Kerry Perse, U.S. director of social at OMD. Brian Rifkin, co-founder of digital video player company JW Player, which licensed its tech to LittleThings, said the site was good at testing posts for engagement and creating a clean environment on the site to better compete for video dollars. “They started to understand there’s so much revenue in video, it’s better to have a pared-down site,” he said.

But LittleThings faced a lot of competition from other, better-established lifestyle titles. “Their bigger challenge was just a lot a sameness in a product in a very competitive space,” said Steve Carbone, chief digital and investment officer at MediaCom North America. “I had a lot of heart for LittleThings, but the category they were in was fierce with more mature competition.” Last year, its non-programmatic business was just in the single digits as a percentage of total revenue, and then, when LittleThings’ audience declined this year, programmatic revenue fell along with it.

“Every day we’d be having meetings saying, ‘What was Facebook’s algorithm change today, and what can we do?’ It was always an issue,” said Jessica Rotkiewicz, who worked as a news and branded content producer at LittleThings until she was laid off last April. “At the end of the day, the company was relying on another party they couldn’t control.”

https://digiday.com/?p=277735
Most Read
Trending in Publishing in the Platform Era
Digiday Top Stories