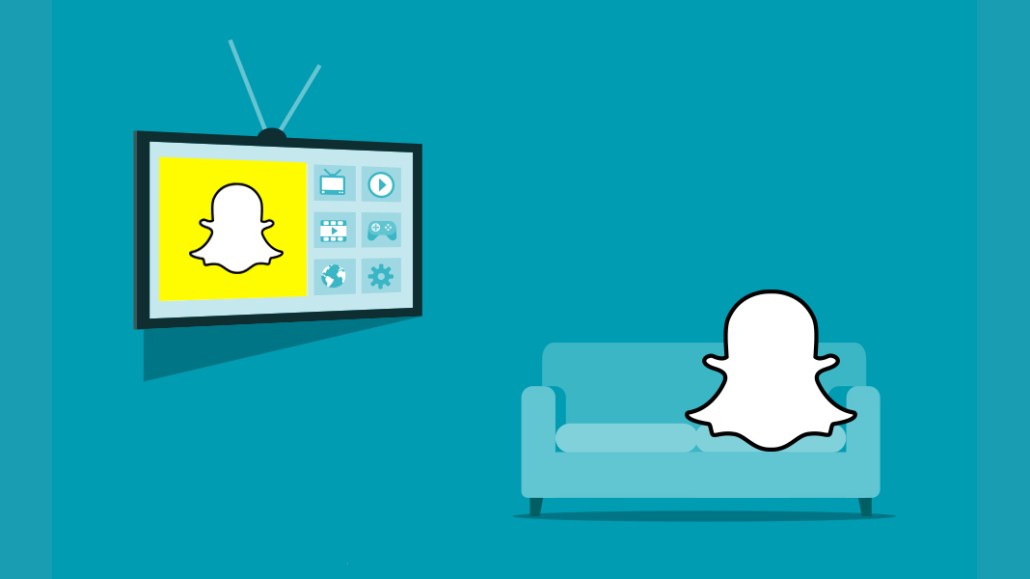 Snap wants Snapchat Discover to be more like TV — and longtime media partners, as always, will be expected to adapt.

While sources could not say whether Snap plans to create a dedicated area inside the Discover section for shows, Snap has made it clear to them that shows are now “a much bigger priority,” said one media executive. “Shows will become the prominent content in Discover. Snapchat wants to be TV and entertainment, and they want stuff that people want to watch so they can place a lot more ads inside Discover.”

Snapchat’s TV dreams
Snapchat’s desire for TV-like content is well-established by now. Since last summer, the company has been courting Hollywood studios, TV networks and other video producers to create short-form shows for Snapchat Discover. So far, the effort has resulted in video series like E! News’s “The Rundown” and a short-form offshoot of BBC’s “Planet Earth II” documentary TV series — which received a prominent spot at the top of Discover as recently as last Friday. Snap has deals in place with NBC, ABC, Turner and A+E Networks to create shows for Snapchat Discover.

“There’s a little bit of risk because we don’t know what the [user-interface] for shows will ultimately look like and we don’t know how they plan to market it,” said Paul Greenberg, evp and gm of 45th & Dean and FYI at A+E Networks, which is producing at least one Snapchat show — an unscripted series about dating and exes called “Second Chance” that will premiere in April — with the potential to do more shows down the line. “But we take it on good faith because they’ve had a track record of getting audiences to watch and engage.”

While shows from NBC, Turner and others come out of larger content and advertising partnerships between Snap and those companies, Snap is out selling ad inventory for individual shows. “When BBC did the ‘Planet Earth II’ launch, Snap was the one who came to us,” said one ad buyer pitched by Snap. “They’re heavily involved.”

TV companies have so far had the clear advantage in the “Snapchat Shows Initiative.” This includes existing Discover media partners — which includes TV networks — that are also creating episodic content for Snapchat Discover. Turner-owned Bleacher Report has a weekly soccer series called “Saturdays Are Lit,” which runs on its Discover channel in the UK. Both MTV and Comedy Central are doing shows that run inside their international Discover channels. And ESPN created a five-minute version of “College GameDay,” which aired every Saturday during last college football season. Others, including MTV and Refinery29, are pitching Snap on show ideas, sources said.

Last October, Recode reported that Snap was no longer interested in sharing ad revenue with Discover partners. Instead, the company wanted to pay a flat licensing fee up front and retain all of the ad revenue generated from the content. Last year, Snap paid out about $58 million in revenue-sharing payments to Discover publishers, according to the company’s IPO paperwork. That’s money the company wants to keep, with the added benefit of being able to sell bigger campaigns that span multiple Discover channels and Snapchat products.

Not all Discover media partners have embraced Snap’s new terms. Unsurprisingly, many of the big media companies including Hearst, ESPN and Vice pushed back and retained their existing revenue-sharing deals, sources said.

Other Snapchat Discover publishers have agreed to a flat licensing fee. Two current partners are getting paid between $2 million and $4 million annually by Snap for their channels, sources said. These deals are multi-year contracts with the first year guaranteed and the ability for both sides to opt out of the deal during future years.

One publisher said the licensing fee is more than it was earning from selling ad and splitting the revenue with Snap.

“A third-party is writing me a seven-figure check to create content for their platform and it’s guaranteed for an entire year — so yes, I’m jumping up and down,” said a source at this publisher. “The other option creates far greater risk for us; this option offers a little more a guarantee [in revenue] even if the upside is limited.”

Discover has gotten fatter
For a long time, Snapchat Discover was an exclusive club featuring daily content from 20-something publishers. That’s no longer the case: Snap now counts more than 40 Discover partners including recent additions Entertainment Weekly, Essence, Harper’s Bazaar, Vulture and The New York Times. This does not include shows and Snapchat-curated public live stories, which also appear inside the Discover section. Last Friday, users had as many as 34 different content options inside Discover.

For Snap, the frenzy is driven by a need to grow audiences on Snapchat, which is struggling to grow users in the face of increased competition from Facebook. New media partners with loyal followers are one way to fix that problem (while also creating more ad inventory) — but it might have an adverse affect on the partners themselves now that they have to compete for attention in a more crowded environment.

“If you’re a Snapchat user, do you care if you’re getting news from The Washington Post or The Economist or CNN or NowThis or The New York Times?” said an executive at a current Discover publisher. “You have like six news outlets now. It’s going to be a much tougher nut to crack. If you’re not in a class by yourself or a unique category, you’re going to struggle.”

The situation also gives more bargaining power to advertisers. “It lets you be pickier instead of having to settle,” said one ad buyer.

Even with a more crowded landscape, multiple early partners said daily viewership and engagement has been growing at a “steady” clip, with one publisher witnessing a 25 percent increase in daily viewers over the past three months. “It’s a crowded space now, but we have the advantage of time,” said a publishing exec from this Discover partner.

“If you’re not in a class by yourself or a unique category, you’re going to struggle.”

Even some of the newer partners have an optimistic outlook. The Washington Post, for instance, has the distinction of being the only Discover channel that updates multiple times per day with breaking news.

“We’re not concerned about it,” said Christopher Meighan, director of emerging news products for The Washington Post. “What we’re offering is distinct and different from what others are doing — and [Snapchat’s] a space we’re happy to be playing in.”

It’s just one of many examples of Snap making a change or prioritizing a certain feature or initiative over another and that change having a direct effect on publishing partners. Snap’s dual efforts in getting more TV-like content and adding more daily editions for Discover is no different.

“From Snap’s standpoint, it’s the right direction to move in,” said one media executive. “They are getting every publisher to go to war for who can make the best content and that publisher will end up making more money. But it’s not a sustainable thing for most publishers to be on.”

Others argue that this is just the new normal in a time dominated by platforms and distributed content models.

“There was this whole controversy about Snapchat putting Discover below the fold,” said another source, referencing how some Discover partners saw viewership decline by as much as 33 percent following Snapchat’s decision to put Discover content below user stories. (Viewership has been trending back upward since then, according to multiple sources.)

“The sky is either falling or changing colors every few weeks,” said the source. “It’s enough to keep everyone on their toes, but it hasn’t killed us.”

https://digiday.com/?p=227099
Most Read
Trending in Publishing in the Platform Era
Digiday Top Stories