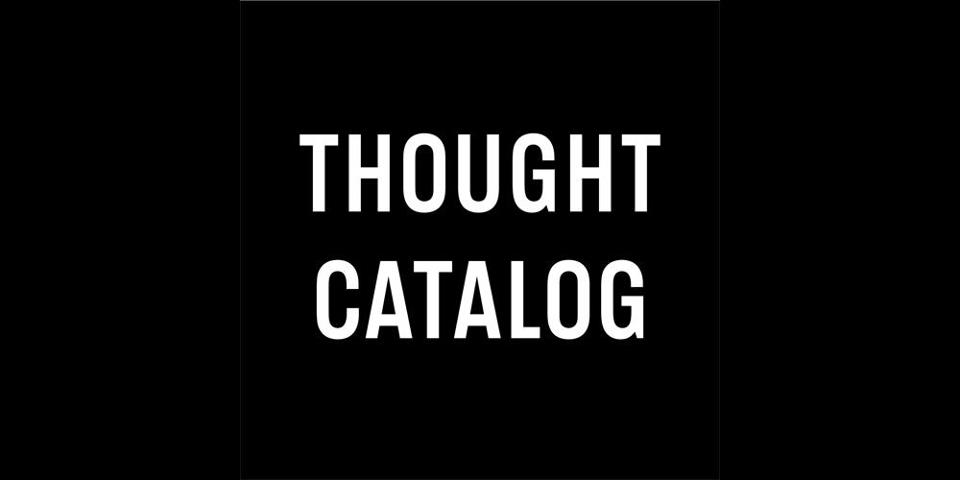 It used to be young creative types started magazines that defined the culture. Think Spy in the mid-1980s or even Might in the 1990s. The digital era hasn’t quite had that. One effort underway, naturally in the Williamsburg area of Brooklyn, wants to change that.

Thought Catalog, which started publishing in early 2010, is a unique publication. It is one part diary, one part humor, one part intellectual musings, one part sentimentalism, one part pop culture, one part experimentalism. It is a mixed bag of content from many different voices, from writers who have been published by the likes of Slate, The New York Times, The Paris Review, and from writers who may never have been published before. It’s the kind of place where you can find an ode to reading books and a heartfelt letter to Lindsay Lohan about still loving her despite the sad plastic-faced trainwreck she’s become.

Founder and publisher Chris Lavergne sees the site as a place for expression and constant experimentation. It was only last year, after it gained real traction, that he really saw it turning into a business.

Lavergne began Thought Catalog while working as a marketing strategist at Warner Bros. Records and doing other media consulting jobs on the side. In 2008 he registered the domain name without knowing much else other than having the idea for the publication.

“My first concrete goal was just to establish a cool place for people to publish that went beyond Tumblr or your typical WordPress template,” explained Lavergne of his expectations for Thought Catalog. “And then make it self-sustainable by advertising so I could quit my day job.”

He spent the next two years prototyping the site, reading every book he could find on communications and media in preparation for launch in February 2010. “We didn’t know what we were doing,” he said.

Nevertheless, the site started growing quickly, thanks to its mixture of humorous and thought provoking, but always personal and of-the-moment content. Thought Catalog’s readership jumped from 800,000 uniques last October to 2.5 million in January, a period of growth that Thought Catalog’s site designer James Ellis of design shop Athletics refers to as “the Beatlemania period.” They had to change servers several times to support the increasing traffic, which was a headache each time, but one of those good problems to have for a small publisher.

“Thought Catalog is exactly what twentysomethings and millennials are thinking, but that you don’t see anywhere else,” said Chelsea Fagan,Thought Catalog’s 22-year-old editor abroad, who writes from Paris. That is the beauty of Thought Catalog.

It is open to all writers, to all subjects, to all opinions. Content includes posts like “What Would F. Scott Fitzgerald Say About Jersey Shore,”  “The Friend I Lost (But Still Have to See on Facebook” and “50 Morbid Thoughts I’m Having at Work.” The writing ranges from witty, funny, serious, thoughtful, heartfelt, silly or all of the above. Most of all, it is honest and uninhibited. It is millennials talking about their thoughts and feelings about everything and anything that is important or amusing to them. That might mean talking honestly about bodily functions and sexual encounters, or it might mean funny cultural commentary, or it might be review of the latest exhibit at MoMa. Thought Catalog speak to twentysomethings on their terms, which is in large part due to the fact that most of the content is created by that demographic.

“A lot of writers just can’t get published anywhere else. I like being that place that takes a chance,” said Gaby Dunn, one of Thought Catalog’s editors, who is also a columnist for the New York Times Magazine and does stand-up comedy.

The site isn’t without its critics. Some see it as an outlet for the vapidity of a generation of young narcissists who take themselves far too seriously at far too young of an age. Lavergne himself casts an interesting figure, unwilling to disclose his own age or much of his background. The New York Observer says he worked for a Wall Street consulting firm, although that’s not in his LinkedIn profile, which only lists Warner Bros. as a previous employer.

Thought Catalog has gone from Lavergne and a few editors working from home and in coffee shops to a staff of five editors, a vp of sales, about 20 freelance writers on contract. It now has over 900 submitted pieces a month, and an office space next to Brooklyn’s McCarren Park, with a beer garden conveniently located downstairs.

For ads, Thought Catalog is banking on its audience of young, smart, hip people who have some money to spend. Its audience would seem to overlap with the likes of The Awl or even Gawker. Alex Magnin, previously part of the founding team at luxury ad network Martini Media and now heading ad sales at Thought Catalog, sees the 21-34 year old demographic as the key. Nearly three-quarters of the site’s audience falls in that demo. Thought Catalog understands that its ad strategy has to be honest and organic to connect with that discerning and advertising-wary audience.

For that reason, like The Awl and Gawker, it’s getting into branded content. The Thought Catalog twist is not really changing much for the brand as far as its content goes, but rather waiting for content that is appropriate for that brand’s message; and with so much content being submitted daily and with about 10-17 posts being published daily, it doesn’t take long to find content that works for a brand.

While much of its business is still driven largely by traditional display advertising, Lavergne and Magnin are currently working with their design team at Athletics to offer new, easy-to-use ad products along with a Thought Catalog newsletter and a new site design that features more of Thought Catalog’s abundant content and more prominently features its writers who are the real core of the Thought Catalog brand.

“It’s not about the banners, it’s about becoming a friend of Thought Catalog. It’s about custom posts,” said Magnin.

They are also focusing on offering more text-based sponsorships, like a “twentysomething series,” which is an idea they are fooling around with as a possibility for sponsored content. It would be profiles of different twentysomethings who are successful in one way or another, whatever success means to them; so that could mean a 24-year-old who is married and bought a house or someone who just started their own company or opened a restaurant. Whatever branded content that Thought Catalog runs, that content will be in keeping with the voice and style of the publication.

What it comes down to is the writing. The Thought Catalog brand is about the unique content and the writers behind that content. “We consider ourselves a tech company,” said Lavergne, “but our technology is language.”