Intel Steps Into The Publishing World 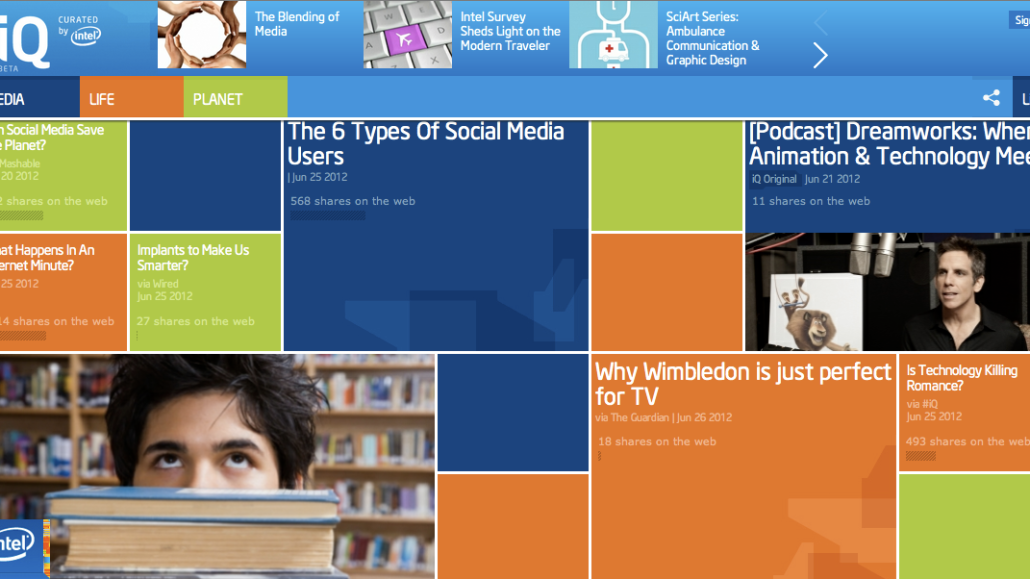 Last month, Intel took a big step in the evolution of branded content. The tech company moved further into the publishing waters by launching its own curated site, Intel iQ. While not the company’s first foray into publishing (it ran Intel Free Press a few years ago), Intel iQ takes the branded journalism Intel Free Press delivers to beyond the Intel walls.

The idea: aggregate content the brand was producing and curating from 160 Intel employees to highlight what the company is reading, sharing and finding interesting. It is also mixing in Intel-specific content like a post from Intel’s CIO, Justin Rattner, about how Intel is approaching industrial research in the 21st century.

The site is aimed at younger audience who may not be as familiar with Intel. It isn’t republished press releases, but information about tech culture — some from other sources, some from Intel. The hope is to get their attention through content from other sites that its audience would be interested in, like The Six Type of Social Media User (via Social Media Today) and Social Media a Slam Dunk for the NBA (from Intel social strategist Woody Wommack). At the heart of this, however, is Intel’s brand. This is still a marketing function wrapped in content, which could be a coming trend for big brands.

“We’re capitalizing on social actions and our employees as an additional filter to content,” said Bryan Rhoades, the editor-in-chief at the site. “The goal for iQ is not necessarily to make a destination, but a content engine to feed the 24/7 social graph, just knowing that content discovery has changed. We have a deep bench who are active on social networks, and this is saying let’s use that as a resource and publish what grabs our attention.”

Intel is, of course, not alone in fancying itself a publisher. IBM has A Smarter Planet, which curates content related to the brand’s attributes. AmEx has long created content for small businesses. The question hovering over these moves is whether brands can pull it off. After all, it’s not like there’s a dearth of tech blogs and aggregators out there.

Rhoads is a longtime Intel employee. At the company for a dozen years, he’s played a key role in establishing the company’s digital strategy. He’s aided by Luke Kintigh, who serves as the managing editor of the site and is also the social media strategist at Intel. The site posts regularly, finding content through the social streams and from its 160 corporate participants, on stories that are relevant to the brand and what people find interesting. Topics from social media to technology to entertainment bubble up on Intel iQ.

According to Rhoads, Intel has a corporate-wide social media training session — a 20 minute on-demand course — and once an employee takes that course, they can be a social media practitioner (SMP). There are currently about 5,000 SMPs at Intel. Rhoads asked certain SMPs if they would like to be part of the program and got about 160 who were interested to participate.

Through Intel iQ, the brand is taking the pulse of the Web by surfacing interesting and engaging discussions about three buckets: media, life, planet. Rhoads pointed to Moore’s Law, named after an Intel co-founder who predicted that the number of transistors placed on a microchip will double about every two years, as the genesis for iQ.

“As brands build up these large communities on social networks, it’s forcing them to think more like a publisher,” said Kintigh. “All of a sudden they have this community that needs to be fed this valuable content.”