How The Independent got its BuzzFeed on 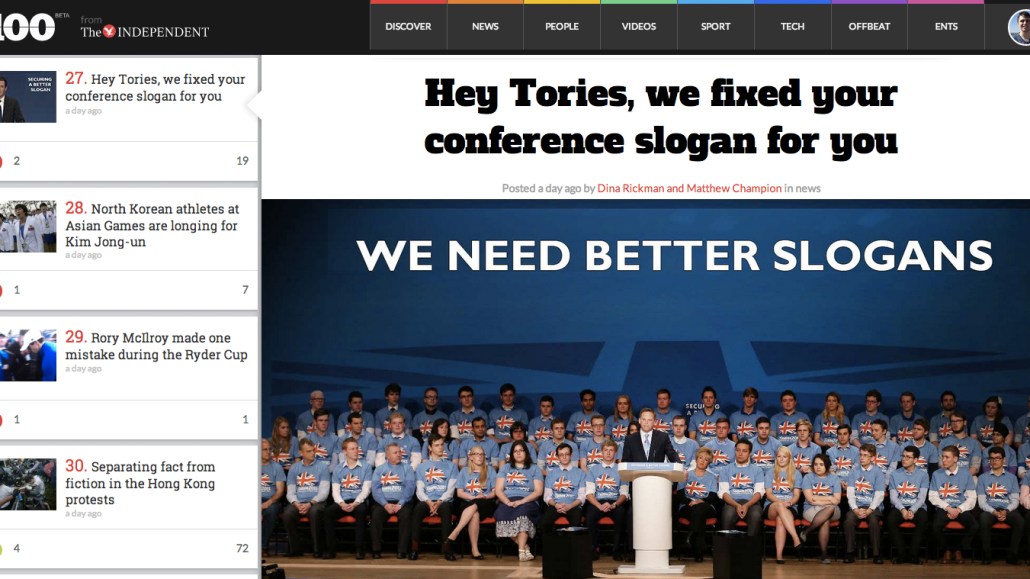 Like all newspapers, The Independent, an up-market national tabloid which sits within the Lebedev family’s stable of British newspapers, is on the hunt for digital growth.

That means taking a page out of the book of digital native publishers with high-metabolism, social media-optimized content with the newly launched i100, a site heavy on visuals that offers social media-oriented twists on the news, explainers and viral Web commentary. The result: stories like “Has the Ryder Cup result been predicted by a psychic Tiger?” Not exactly the type of fare you’d expect from a buttoned-up newspaper brand.

Its change in tone comes with a fresh site layout, complete with responsive design, infinite scroll and social sign-in. Reminiscent of reddit and Foursquare, signed-in users get to up-vote content to the front page and get badges and rewards for interacting, too.

So far, the digital experiment is showing signs of paying off. It’s two months in, and the i100 has attracted 1.9 million unique users in August, according to the group’s digital editor, and has gathered 29,000 Twitter followers and 12,000 likes on Facebook. What’s more impressive: It’s done that with an edit team of just three.

“We wanted to prove that could build an audience which hits that sweet spot between encouraging reader interactivity and connecting with people’s urge to share content, while still covering serious issues in an authoritative way,” said Christian Broughton, digital editor at The Independent. “These early results give us encouragement that we can.”

Naturally, the fear going into the project was that the group would be accused of dumbing down its news coverage. But Broughton maintains it combines the best of its reporting traditions with the type of content that’s sharable.

“If I had a Men In Black’s neuralyzer, I’d use it to make journalism graduates forget journalese,” he said. “We encouraged the i100’s team to speak the language of the Web and connect with people emotionally.”

The Independent isn’t the first to try to build new audiences away from its traditional newspaper websites. Trinity Mirror’s Ampp3d and UsVsThem have both built new audiences completely from scratch, as has The Telegraph’s Project Babb. And then, of course, there’s The Daily Mail, which has morphed into an entirely different beast online, thanks to a laser focus on celebrity content with wide appeal.

“The key question for legacy media companies hoping to engage new audiences is whether it’s about brand extension — carrying their core proposition and values into new formats — or creating new brands that seem disconnected from the parent media group,” he added.

As for the quality and standards issues, Broughton brushes them off, pointing to maintaining a legacy mindset as a bigger threat for news publishers.

“Where publishers go wrong is that they have a dedicated social media team but expect results from the way they package up what is still fundamentally print content produced with a certain mindset. What we’ve done is try to maintain the quality of our reporting but have our stories speak to people in an more authentic way.”