Banners aren’t going anywhere, but publishers are busy trying to remake them into something more interesting — and that advertisers will pay more for them than the rock-bottom rates available in programmatic ad buying.

For some sites, that means rethinking the page. Gannett, for example, eliminated 47 percent of its ad slots in its September 2012 redesign of USAToday.com. At the same time, IDG Consumer & SMB took a “less is more” approach, removing two to three standard display ads per page. It instead rolled out what it’s calling “the content hero” on TechHive, PCWorld and Macworld. The oddly sized unit, which is 1130 x 500, takes over the site on the homepage and highlights the advertiser’s offering. The unit sits on top of editorial content for the first eight seconds of the user’s visit. It then reduces in size and leaves the brand logo on the site.

“By taking fewer ads, we thought it was risky because eliminating ads means we may lose money,” said Brian Gleason, chief revenue officer at IDG TechNetwork and IDG Consumer & SMB. “But [this] proves larger units, more impactful units that can fit in with the design of a page without taking away from the user experience is being welcomed on both sides.”

IDG claims the units are working, even by the currency of commoditized media. The larger ads get click rates of 2-4 percent. IDG has run campaigns with the units for Microsoft, Brother and Samsung. It commands a healthy $40-60 CPM for the ads, which is about twice as much as the standard placements on its sites.

“The challenge is how to be innovative and thoughtful and look at the client’s needs, and that links to everything else: content, design, with the goal to how to create the best experience for our audience and, in turn, the best results for clients.” 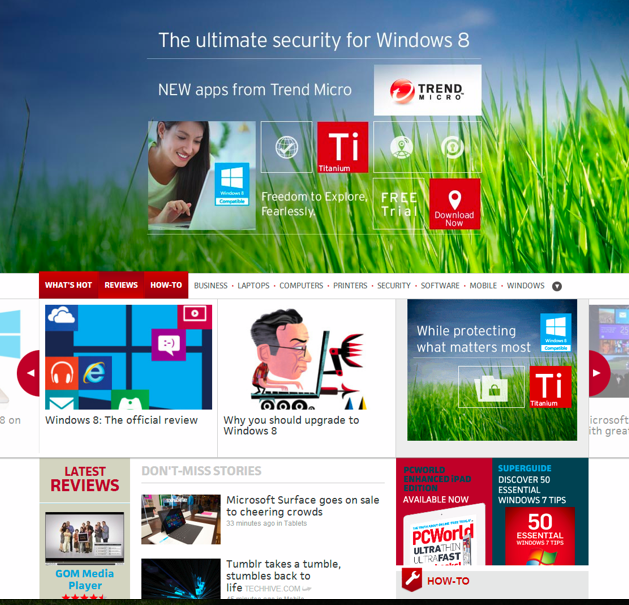 The usual complaint about non-standard units is they don’t scale. It’s a problem for any publisher that wants to reinvent the banner. Just ask AOL, which has run into problems making its large ad format a standard.

Brother introduced a new printer in the beginning of October, and it launched a campaign that ran through the end of December online, in print, on cable TV and on mobile, according to Peggy Groppo, media account director at Agency PJA, who ran the campaign. Brother set its sights on two types of sites, one set for “awareness” of the new Brother printer, another for “consideration” — people who were in the buying mode for a new printer. Awareness sites included Bloomberg, NY Times, Time Inc., and AT&T. Consideration sites included PCWorld, Macworld, TechHive and IDG Tech Network, CNET and Ziff Davis. These sites were chosen, Groppo said, because they are popular places for people to read reviews of printers and determine which is the best printer for them at a time when they are in the market for one.

“People going to PCWorld to see what’s going on will see your ad,” said Groppo. “They may well click on it because it looks like something new and could be of interest for the day. The other thing is, so many expandable ads get in people’s way. I don’t like to annoy potential clients. I like that it’s clean and goes on and goes off. It’s a fine line to stand out without annoying people.”