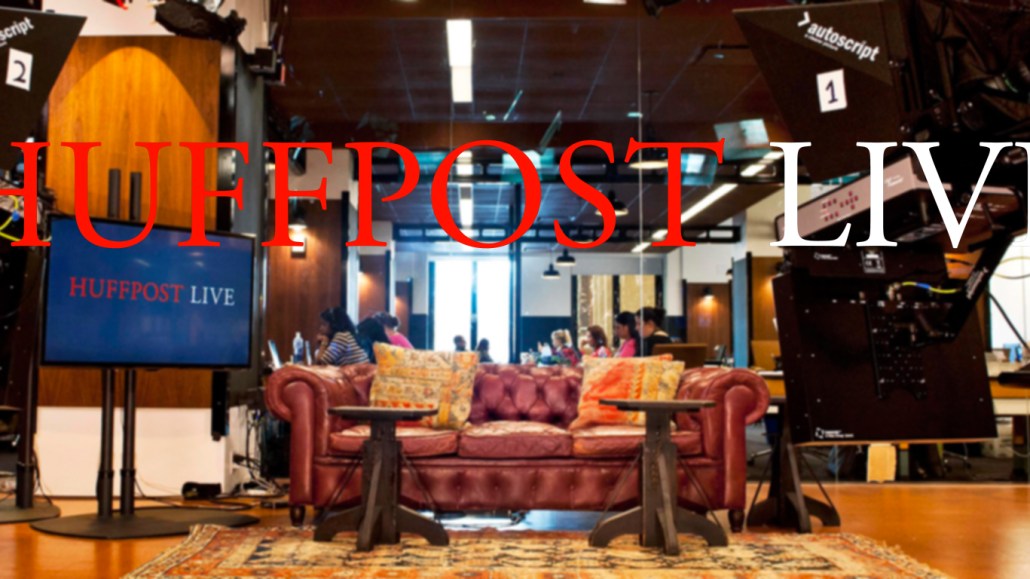 The HuffPost Live platform streams eight hours of news video every weekday, but that’s not where most people are seeing it.

The 70-person HuffPost Live team creates the majority of The Huffington Post’s original videos, filling 10 a.m. to 6 p.m. EST each day with live conversations about the news. Topics span from politics to entertainment, with live text and video comments from viewers.

But the live-streaming portion of HuffPost Live is largely a byproduct of the operation, not the end goal. Since its inception in 2012, Huffington Post executives have envisioned HuffPost Live as a “clip-generating machine,” one with fixed production costs and clear returns, said HuffPost Live president Roy Sekoff.

“In our vision for it, the first three years were going to be focused most on the video-on-demand piece,” said Sekoff. “Live is the way we keep our costs fixed. I know what I spend every hour.”

That strategy has enabled The Huffington Post to cheaply produce around 400 original video clips each week, which Huffington Post editors embed in articles across the site. The company also pipes HuffPost Live content to several other distribution channels, including the AOL On video network and Hulu, which began posting HuffPost Live interviews last week.

HuffPost Live offers The Huffington Post a massive amount of video inventory to sell, and video ads command far higher rates than standard display units. Those market conditions explain why Huffington Post founder Arianna Huffington said she’s aiming for half of the site’s content to be video. “It’s going to be a bigger and bigger part of what we’re doing,” she said.

Cadillac and Verizon signed on as founding sponsors when HuffPost Live launched in August 2012, but the video-streaming network has since attracted dozens of other deep-pocketed advertisers. Insurance firm Aetna, which recently sponsored 20 HuffPost Live segments, confirmed that HuffPost’s ad rates are “on par” with other premium video inventory from other publishers.

“The Huffington Post has a great array of consumers,” said Wendy Wahl, Aetna’s vp of enterprise marketing. “They’re great partners for us based on our consumer-targeting strategy.”

HuffPost Live videos, like The Huffington Post itself, have a very broad reach. They racked up 92 million views across various platforms last month, according to the publisher. Data from analytics firm comScore shows that the HuffPost Live platform garnered 27.5 million views on U.S. desktop devices in October, representing around 12 percent of the total 236.1 million video views The Huffington Post served to U.S. desktops during that period.

“In terms of monetization, it’s probably closer to 15 or 18 percent,” said Jimmy Maymann, CEO of The Huffington Post. “It’s definitely becoming a valuable part of HuffPost from a monetization perspective.”

In recent weeks, HuffPost Live has booked interviews with a number of prominent figures and celebrities, including “The Daily Show” host Jon Stewart and investigative journalist Matt Taibbi. Those A-list guests are a reliable way to attract mainstream attention and traffic, said Sekoff.

“When we first launched, we didn’t see celebrities as a big part of our programming,” he said. “But we saw very quickly that that’s a very appealing part of what we do.”

But the biggest way to garner influence and attention is to ask the right questions, he stressed, which tends to mean lengthier interviews. “Is every exchange a mindblower? No. But you’re getting someplace in the conversation, and sometimes the payoff is surprising and rich.”

Still, HuffPost Live could benefit from some programming variation and more tightly-produced content. That’s why it’s looking to produce a few flagship shows, including at least one documentary series, which it expects to roll out sometime next year. Sekoff pointed to John Oliver’s “Last Week Tonight” as inspiration, given its lengthy topic dissections and major social traction.

“We’ve got the scale part down. That’s working like a well-oiled machine,” said Sekoff. “But we’re looking at a couple of things like [‘Last Week Tonight’] that hopefully have potential to break out and really become a brand definer.”

The format might be easy to replicate, but the talent won’t be, noted Altimeter Group media analyst Rebecca Lieb.

“They want to generate that virality and those clicks, and John Oliver is as viral as content gets right now,” she said, “We’re going to know this type of programming has succeeded on the day when a Huffington Post or a similar property signs John Oliver or Jon Stewart. And it will eventually happen.”