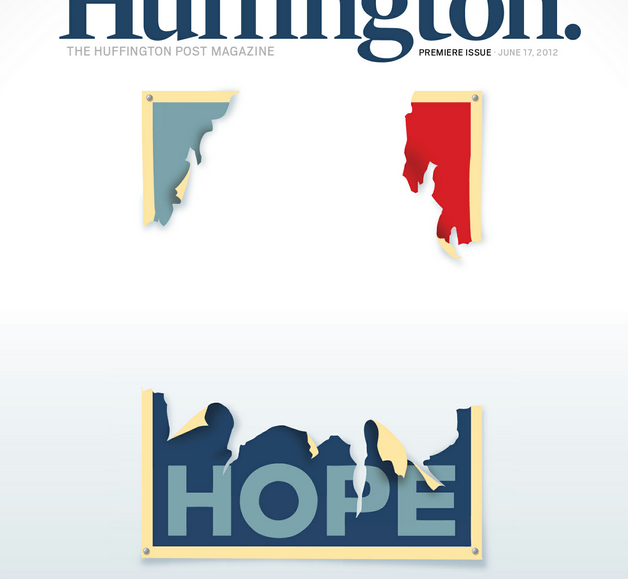 Titled simply “Huffington,” the iPad-only publication focuses on long-form content, with three articles between 4,000 and 8,000 words anchoring each week’s issue, among shorter-form content. There are photo essays each week, as well as back-of-the-magazine reviews (food, film, music, books) as a lighter way out of the publication. Its initial pricing plan: free for the first month; free for two months if you provide your email and zip code; after the first free month, readers can choose one of three plans: $.99 an issue, $1.99 per month or $19.99 per year.

“We’ve got a magazine that’s interactive, shareable, has live commenting inside articles, and interactive graphics,” said Tim O’Brien, executive editor at the Huffington Post who will be running the magazine. “It’s a visually stunning product — elegant and clean and renders beautifully on the iPad.”

According to O’Brien, the idea for the iPad-only publication came from conversations between Huffington and him about the feature work the website was producing. The Huffington Post’s David Wood won this year’s Pulitzer Prize in National Reporting, showing online-only news journalism is maturing.

“We felt there wasn’t enough time in the day during the daily rush to engage with features on the website with as much time and depth as we would have liked,” O’Brien said. “We think features are unique and a primal point of engagement with a certain sector of readers we wanted to reach. Our first thoughts turned toward building a platform on the great narrative work we were doing, getting it out in a time frame — over the weekend — where people can react in a reflective and in-depth way and build it from the ground up as a digital product.”

The magazine’s editorial voice will blend the high and the low, according to O’Brien. But the centerpiece stories will aim to “take on important, socially significant and sophisticated issues,” O’Brien said. In true Huffington Post fashion, the outlet will have its fair share of the “lighter side of things.”

Toyota sponsored the first issue. There are three full-page display ads, which O’Brien sees as being a sweet spot for the outlet in terms of advertising for the magazine. The publication wouldn’t say specifically what brands are in line for future issues, but O’Brien did mention that it’s had discussions with “other well-known blue-chip advertisers.”

One of the intriguing parts of the iPad — for consumers and advertisers — is the ability to interact with content, both editorial and advertising, in rich ways. For the most part, tablet publications have launched with full-page ads with high-resolution graphics that take full advantage of the beautiful display the iPad has to offer. However, the rich capabilities consumers are expecting haven’t yet been fulfilled. Huffington seeks to change this.

Beyond using the print world’s full-page ad, Huffington is looking into experimenting with different formats like HTML, which will allow mini-sites to be integrated into the magazine, 3-D, allowing mini-experiences within ads, like having the ability to sit in the driver’s seat of a car or take a virtual test drive. According to Mandar Shinde, the Huffington Post’s senior director of mobile and mail monetization, these 3D ads will feel like print (offline) ads with a “super engaging experience when users are online.”

“I think the tablet marketplace is extremely important,” said Sal Candela, mobile director at PHD. “There are multiple behaviors that a consumer takes on a tablet, so it’s important for us to look at [Huffington] to see how people use it now. It’s important to monitor and see the shift from desktop to the tablet space. We’re keeping a close eye on this one.”

The Huffington Post has been quite busy recently. Besides its flagship site, the company will soon launch the Huffington Post Streaming Network, an online video network. Any fears of being spread too thin are washed away in the amount of resources for each. On the magazine side, there’s a dedicated group of designers who have been working with O’Brien for the last seven months, as well as a dedicated editorial team. O’Brien says there are two dozen staffers at Huffington.

“We’re always going to be aggressive and try new things,” O’Brien said. “We’re not spread too thin, but definitely juggling a lot.”