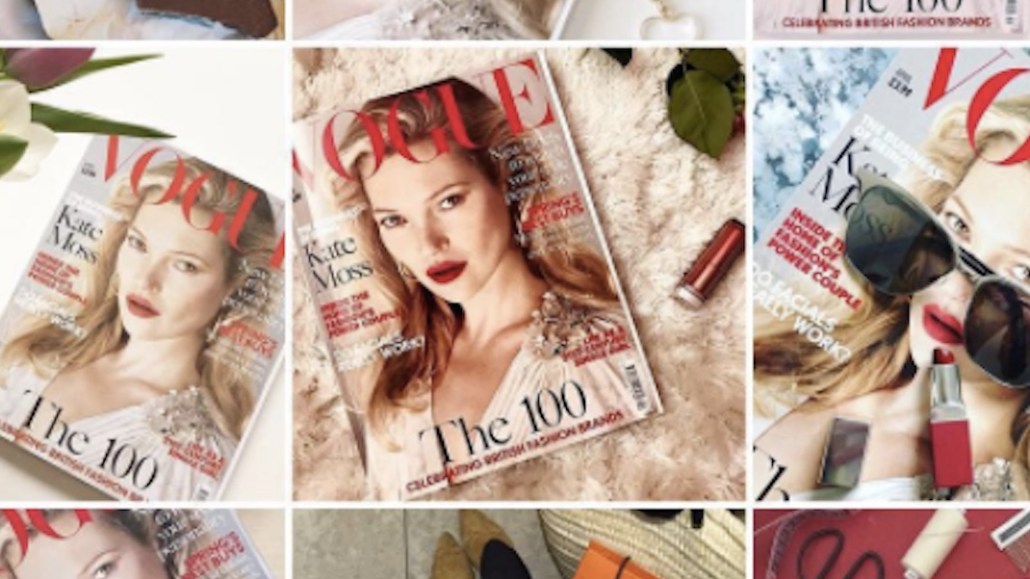 There are 26 international iterations of Condé Nast’s Vogue and what’s become evident at the end of 2020, as the coronavirus crisis continues its disruptions, is that the iconic fashion brand’s global audiences have key similarities that Vogue has identified — and put to very good use.

Of course, these audience behaviors started at different points of time as each country felt the impacts of the pandemic and subsequently went into lockdown. But because of that, Sarah Marshall, who has been guiding audience development for the international editions of Vogue for the past three-plus years, said that her team was able to see patterns and know what to expect from readers’ daily habits. That then enabled her team to act on those behaviors and reach record readership.

Condé Nast runs 11 owned-and-operated Vogue titles, including the editions in the U.S., France, Japan and Italy. Beyond that, there are three editions that the company publishes with joint support from other corporations and 15 international editions that are licensed out to other publishers.

One of the biggest changes in audience behavior that Marshall said she found was the initial two-week decline in readership in the evenings for all of the Vogue sites.

“In the backend of 2019, we found that for every single Vogue [site globally], they had peak traffic in the evening for both loyal audiences [those who visit the same Vogue site four or more times per month] and fly by audiences,” said Marshall, with a peak at 10 p. m. local time.

But in the 12th and 13th weeks of the year (weeks of March 16 and 23), there was a significant drop off of people who came to Vogue sites, likely due to people being glued to news outlets to get updates on the coronavirus crisis. 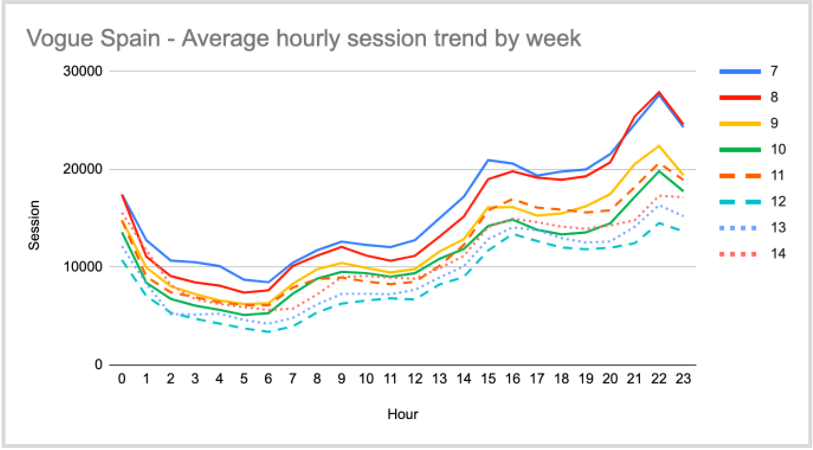 Image description –
Courtesy of Condé Nast | How Vogue Spain's readership dropped off in evening hours during the 11th, 12th and 13th weeks of 2020 and started rebounding in the 14th week. 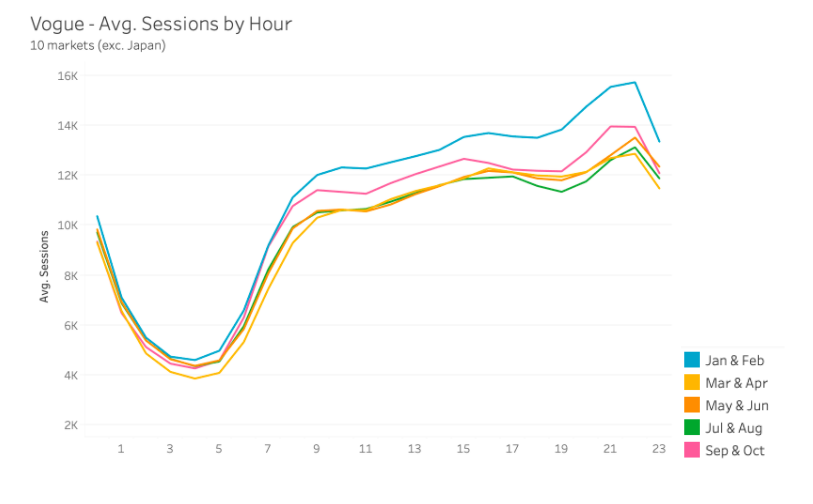 Image description –
Courtesy of Condé Nast | The average number of sessions spent on 10 Vogue sites sees decreases in the evening during March through August 2020.

“We had Italy, Spain and France in severe lockdowns and by the time the U.K. and U.S. went in, we knew we could expect these behaviors. A couple of weeks later, we also had a much bigger picture,” she said.

The daily communications that Marshall said she had at that time with the digital editors of the international Vogue editions focused on “setting expectations of audience behaviors,” and reassuring that these audiences would come back in two weeks.

Since May, Marshall said there was a notable shift in readers looking for “escapism” content after being engulfed by breaking news coverage on the pandemic for a month-and-a-half prior to that, which led to a bump in traffic.

American Vogue reported similar traffic patterns as its fellow international sites in May, according to Anna-Lisa Yabsley, executive director of content strategy. While she said that May usually tends to be a record-setting month for traffic because of the Met Gala, it was a “highly successful” month despite the gala not happening. Around the time of the event, Vogue published retrospective and historical content packages that were built out of previous galas, setting May 2020 up to be record-breaking month as well.

Marshall also said her team began tracking what content readers wanted to consume at different times of the day. By monitoring social engagement and search keywords, they found, readers wanted industry updates in the morning and in the evening wanted to unwind with more lifestyle items.

Stories about altruism, culture, fashion history, sustainability and ethical production became top topics that readers were reading and searching for. And knowing what audiences were interested in, Marshall said, the audience team was able to relay the information to editorial, which was then able to strategize their content programming on social media and other channels to heighten readership at key times.

While the use of international editions to inform audience strategy for editions in other countries is not a common practice, Vogue has a unique global influence, according to Ava Seave, principal and media consulting agency Quantum Media. That’s because the coverage topics of luxury and fashion that Vogue primarily focuses on have very similar customers and consumer behaviors in all areas of the world.

With that advantage, Seave said that there is the ability to test these learnings against more audiences without needing to filter much beyond language.

“I think all of these countries are so different, yet the audiences are so global now that the patterns were similar. It was reassuring in many ways so we could have some sense of learning from this global data set and constantly sharing,” said Marshall.

Marshall said that she’s been able to share these audience insights with Vogue’s top advertisers, including major fashion houses as well.

“They want to know what it means for consumer behaviors. And it’s interesting for them to understand what audiences care about from an audience research point of view, but also from what we’ve learned from reading habits and behaviors,” she said.

Megan Jones, a partner at digital media consultancy January Digital, said that for the clients she works with and represents, including DKNY, The Honest Company and TUMI, any type of publisher insights they can get ahead of making a media buy is a positive.

“With real-time buying taking up so much of advertisers budgets, it’s difficult for publishers to find ways to differentiate their direct buy inventory and breaking down their user behavior in detail is a competitive edge when it comes to selling ad inventory,” Jones said.