How Pop-Up Magazine pivoted from events to video 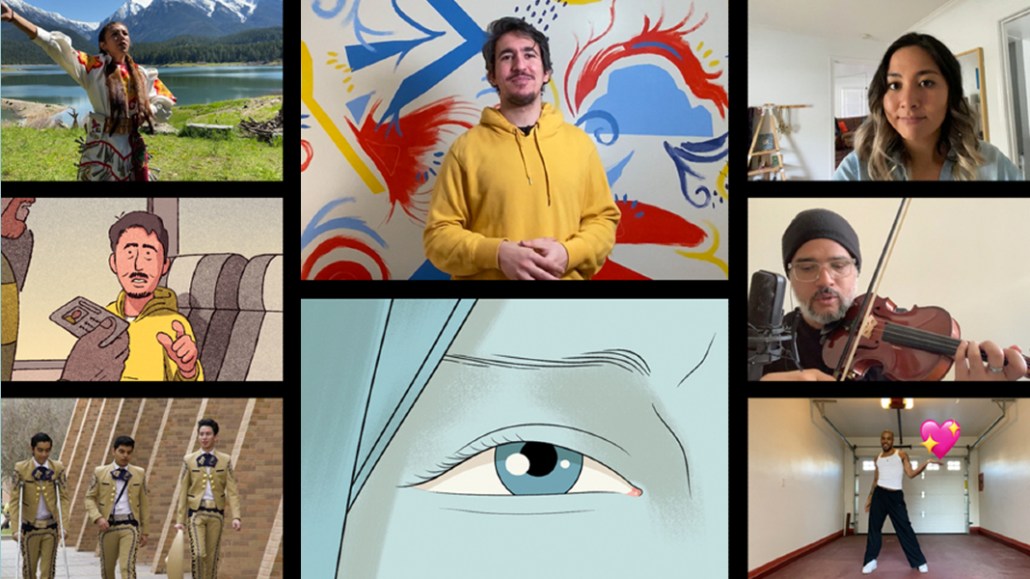 Anyone interested in Pop-Up Magazine won’t be able to find recordings of its 15 live tours that it has put on over the past 11 years across major North American cities. The company’s live performances are not filmed, since the entire idea of Pop-Up is a live rendition of a magazine: a curated performance of comedians, filmmakers, dancers and artists telling 10 different stories, all while feeding off the energy of the crowd.

Times change. The plug was pulled on the Pop-Up tour nine weeks ago and at that point the playbook was thrown out the window. Pop-Up is bowing to reality with its first video edition, a “video graphic novel,” as publisher and president Chas Edwards calls it.

“The Spring Issue: At Home” premiered on YouTube last night. Each story opened with its author filling the screen. Gradually, the other elements of the story — music, illustrations and video — were incorporated into the frame in a grid of boxes, creating one cohesive puzzle. In order to make sure all the pieces worked together, the show had to be prerecorded and edited together, so it is not live like usual.

“We had to translate the experience of sitting in the theater,” said Edwards.

Pop-Up, which was acquired by Laurene Powell Jobs’s Emerson Collective in November 2018, is used to packing theaters like New York City’s Lincoln Center and Los Angeles’ United Artists Theatre, drawing live audiences of up to 7,500. Those venues are now closed, unlikely to open for some time. (Broadway is shut at least through the summer.)

There are some elements that Edwards said could not be replicated, however, such as audience participation and taste and scent sensory integrations. In the last tour, audience members were given a cookie to eat during a specific story. Another story had a choose-your-own-adventure component where the audience voted on a choice using colored glow sticks that were passed out ahead of the show.

Edwards said the live shows are so focused on providing a memorable and interactive experience for its live audiences that viewers at home would be automatically excluded from the full show.

The first challenge of making the magazine for YouTube were the logistical hold ups of not being able to film the different sections together, including not having the band in the same location. The second was that while the company’s producers have experience using video and film in the live shows to illustrate the stories better, stitching together pre-recorded videos for the internet was a completely new responsibility and they had to teach themselves how to do, he said.

The other challenge was figuring out how to not lose out on an entire season’s worth of revenue.

Each live show typically has three or four sponsors that are integrated into the show with performed commercials, Edwards said. But many of their regular sponsors had to cut back on their marketing budgets during the pandemic so his team went a different route with the video issue. Pop-Up Magazine asked Google, a longtime sponsor, to become the exclusive sponsor.

Like the live events, Google’s sponsorship will include a commercial interlude during the show, performed by the 2020 Teacher of the Year.

“The Spring Issue” is still projected to be down in revenue year over year, Edwards said (he declined to share an exact estimate). This is due to the lack of ticket sales and only having one partner, but the partnership with Google is actually a higher price point than what Pop-Up Magazine would charge a live event sponsor.

One reason for having the higher sponsorship price is the internet show is an opportunity to expand the audience by “orders of magnitude over what we would do live in theaters,” he said. Last year, the Spring Tour brought in around 15,000 attendees.

Ticket sales account for 35-40% of the company’s total revenue, he said. This first video edition of Pop-Up Magazine will not have consumer revenue, but he said that future iterations — he expects that all issues for the rest of the year will have a video component — will likely have some form of ticket sales.

Video “is allowing us to do some things that we can’t do in a live show,” Edwards added. Unlike live shows, which take place in large cities, the video can be watched nearly anywhere. Additionally, the on-demand aspect of video is appealing, he said, unlike the shows which take place for a couple nights and then move on to a new location.

Edwards said that the larger audience also provides opportunities for membership and merchandise, which he said will help to diversify away from a complete dependence on sponsorship and ticket revenue.

And while he said ticket prices will be lower for video issues, the margins are higher without having to pay for the large theater venue and those associated costs.

Keeping videos as part of the business model going forward is an “absolutely critical” move, said Paul Greenberg, CEO of digital video firm Butter Works. He added that they “are also creating promotion for when you can go back to live events.” The goal is to get people who have never interacted with the brand to watch this video and then ultimately buy a ticket to the live shows once those are back up and running.

Not having the video element is a “real missed marketing opportunity,” Greenberg said.