How the Guardian uses attention data to increase traffic

As New York City commuters braced themselves for the winter’s first big storm on Monday, the Guardian U.S. was on it. The blizzard story had been one of the weekend’s top reads, a fact that pleased Katharine Viner, editor-in-chief of the Guardian U.S.

“If you use the word ‘blizzard,’ it does really well,” she said during an interview in the Guardian U.S.’s SoHo headquarters.

Viner checks the pulse of the Guardian’s performance every day using Ophan, the analytics platform that Graham Tackley, its director of architecture, built in-house three years ago. As the Guardian and other publishers look beyond the click for better measures of how readers value their stories, the Guardian is striving to understand and increase readers’ time spent with its articles.

Ophan is its trump card, giving all Guardian reporters and editors real-time data on how a story is performing by various measurements and how changes to, say, headlines affect that performance. The name Ophan comes from Ophanin, a Biblical reference to angels that are depicted as many-eyed wheels of God’s chariot.

In the past, it would take hours to tell if changes to a story were having the intended effect, and it wasn’t even clear if the impact was traceable to the Guardian’s actions as opposed to, say, something on Facebook’s or Google’s end. Now, with Ophan, editors immediately get actionable information in real time. “It means you can get things read,” Viner said. “I don’t know how any editor can do without it.”

Many news outlets have data scientists or social media teams that guard reader information. But Ophan was designed to be accessible to the whole editorial team. Using a bookmarklet, a reporter can see at a glance a story’s total pageviews; where the traffic is coming from by referral source, like Facebook or reddit; a traffic breakdown by geography and device; and where they go next, be it a new Guardian article or another site altogether.

Based on this data, the Guardian might pay to promote a story on Facebook on the social network for added exposure if it’s already taking off, or tweak the headline or image if it isn’t doing as well as editors think it should.

Ophan also can help The Guardian pin down the source of dark traffic, the visits that occur outside public search engines or social networks.

In one such case, an editor noticed a 3-month-old story suddenly got a rush of traffic that Ophan identified as having an “unknown” source. By looking at the referring sites on Ophan, editors were able to match the traffic spike to The Skimm newsletter. The Guardian jumped in and added related news links to the story and commissioned a related opinion piece.

In another case, when editors saw that a story — “Israeli newspaper edits out Angela Merkel from front page on Paris march” — was trending well on Twitter and Facebook, they changed the art on the homepage to match the one on the social media posts, and saw traffic spike from the homepage as a result, as indicated by the dark blue line in the screen grab below. 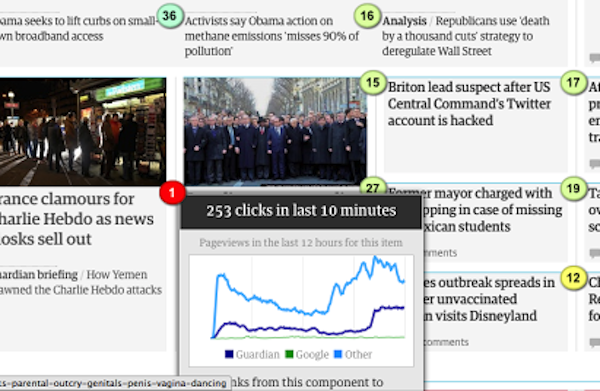 With the Guardian trying to understand engagement, it has made recent updates to Ophan that provide a deeper view into the time people spend on the site. Users can see the average time spent on a story and estimated number of people who read an article in its entirety, based on an estimate of how long it takes to read the given article. Those stats are especially critical to the Guardian in the U.S., where readers have a higher bounce rate than other Guardian readers.

“It’s one of the most difficult concepts to understand and crack,” said Ian Saleh, assistant editor at the Guardian U.S. “The desire from reporters all the way on up was to better understand not only how people get to stories, but what they do once they’re reading.”

In the case of a Jan. 18 feature, “I was sold into sexual slavery,” the story was doing well overall, getting 224,644 pageviews as of Jan. 26 and readers spending a median time of 2 minutes and 44 seconds. But drilling into Ophan showed that on reddit, the story was only being read for 36 seconds. The Guardian figured that because reddit posts are limited to just a handful of words, readers weren’t getting much beyond the headline. Now, the Guardian considers ways to sell a story beyond just the headline when seeing its stories on reddit.

It’s hard to pinpoint Ophan’s impact, because its use has become so integrated into newsroom operations. But the newspaper would argue that the tool has helped it expand its audience. Indeed, its U.S. traffic grew 40 percent year over year to 25,341 million in December, according to comScore multiplatform stats.

“I’m not going to claim we found the Holy Grail of attention time,” Saleh said. “But this is going to get us there. In the end, the quality of your content is going to determine how your readers interact with you. But the Holy Grail is understanding why it is readers are doing what they are.”