Condé Nast is the latest publisher to join the war on ad blocking. Its GQ magazine is preventing people using ad blockers from accessing its site with a popup asking them to disable their ad blockers or pay 50 cents to read an article.

Other publishers have taken a gentler approach, serving friendly messages to ad block users asking them to disable their ad blockers.

For the payment part, GQ is using CoinTent, a micropayment system started earlier this year that lets publishers charge for access to an article or video. Once you click the pay button, you’re prompted to set up an account with a digital wallet that’s designed to make it easy to buy content around the Web. CoinTent’s site also lists another Condé Nast site Epicurious as a client. GQ and Condé Nast haven’t responded to requests for comment. 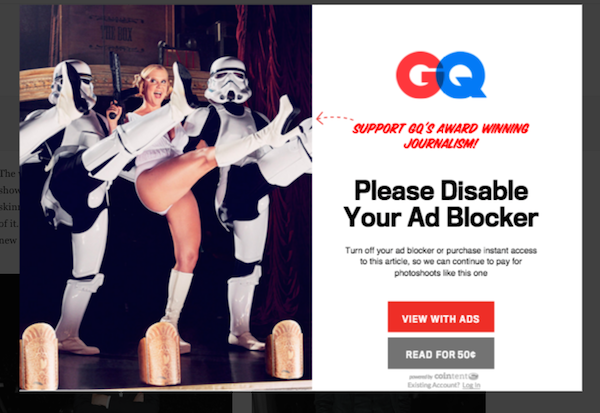 Ad blocking has become a major concern among mainstream publishers this past year as consumers, fed up with ads clogging their surfing experience and worried about their online privacy, have begun ad blocking in big numbers. Ad blocking means lost revenue for publishers as it means fewer eyeballs to sell ads against.