Google’s digital infrastructure touches nearly everything on the internet, including fake-news websites. So unlike tech companies with less reach, Google requires much more than mere blacklists to block fake news publishers from using Google’s various ad services. Sources indicated that ads from Google’s ad network still show up on some fake-news websites and that these websites still rely on Google’s ad exchange to sell their inventory.

“Google has made the decision that when it is up to them [in its ad network], they might choose not to run ads on these websites,” a programmatic buyer told Digiday. “But when one of their [ad exchange] clients wants to place ads next to hateful or misleading content, they won’t stand in the way.”

Within weeks after the presidential election, Google and Facebook made policy changes to their ad networks to curb misleading news from spreading. Sources did not have access to Facebook data, but they were able to examine the advertising that runs across various Google pipes.

One reason Google infrastructure still facilitates advertising on fake-news websites is because Google’s fingerprints are all over the entire Web and the company wants to avoid censorship precedents, sources said. An ad tech analyst noted that Google’s ad exchange, AdX, pulls together buyers and sellers that are often outside of Google’s purview. Whereas Google’s AdSense network gets its demand sources solely from inside Google. This means that it’s much easier for Google to block websites from utilizing AdSense than AdX. Google declined interview requests for this story.

“Even if the ad [in a fake-news article] is traced back to a Google AdX server, it’s not a definitive sign that Google was aware of the ad being placed,” the analyst said.

Were Google’s digital infrastructure not so pervasive, the company could theoretically block out misleading or incendiary content through some kind of blacklist. That’s how AppNexus took its ads off Breitbart after deciding that the so-called alt-right publisher violated its hate speech rules. Data from ad tracking firm Pathmatics shows that the AppNexus blacklist of Breitbart is going as planned. 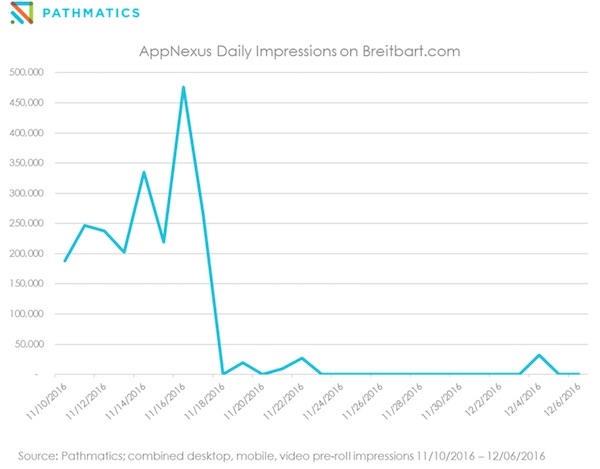 “We are still seeing Breitbart inventory being made available to Google, and that’s a good indication that Google is still making its ad services available to Breitbart,” a programmatic exec told Digiday. 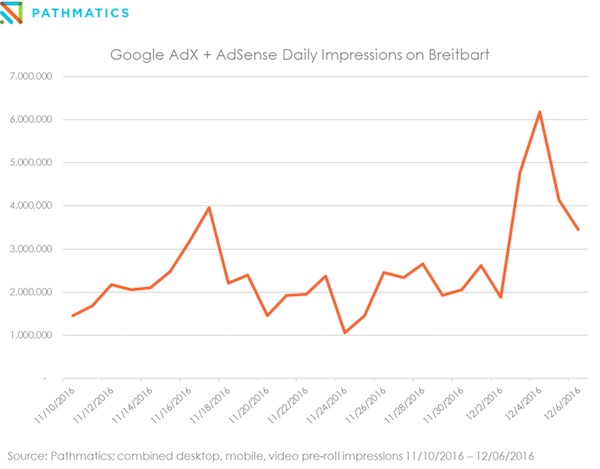 It’s worth noting that unlike the AppNexus blacklist, Google’s policy change never directly addressed Breitbart specifically. So Google-enabled ads appearing on Breitbart isn’t necessarily a violation of the new policy.

The Ghostery tracker map shows that AdSense tags still fire on Breitbart. But that doesn’t necessarily mean that AdSense served ads on the so-called alt-right website, said Ghostery CEO Scott Meyer. For an ad to be served, Google would have to answer the call. And at least in the case of Breitbart, Google is not responding to the calls, Meyer said.

But Google-enabled ads, even within AdSense, are still appearing alongside very questionable content that seems at odds with the company’s recent decision to restrict sites that “misrepresent, misstate or conceal information” (i.e., fake-news purveyors) from using AdSense.

The Ghostery tracker shows that AdSense ads still appear on End The Fed, a website that has published dubious stories about Megyn Kelly, Colin Kaepernick and Black Lives Matter. And as seen in the URL at the bottom of the below screenshot, AdSense is also linked to the monetization of a ridiculous and clearly untrue story from World News Daily Report about Yoko Ono having an affair with Hillary Clinton. Sources indicated that these websites may have simply slipped through the cracks since Google only recently started targeting misrepresentative content, and blocking websites can be a game of whack-a-mole.

“I believe Google is acting methodically, which avoids false positives and disruptions,” said Pathmatic CMO Ken Roberts. “They always look for the algorithmic solutions, and we’ve seen them do major updates like Panda in search that effectively take care of whole classes of bad actors. Though in the meantime, the problem persists.” 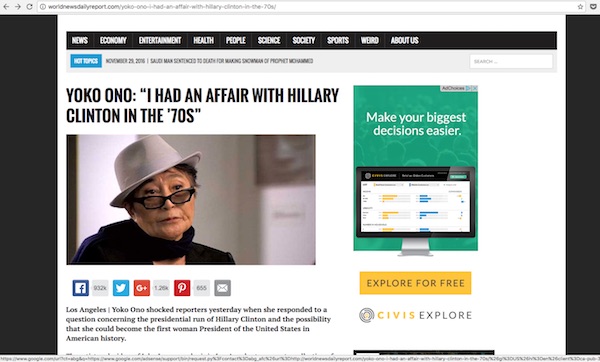