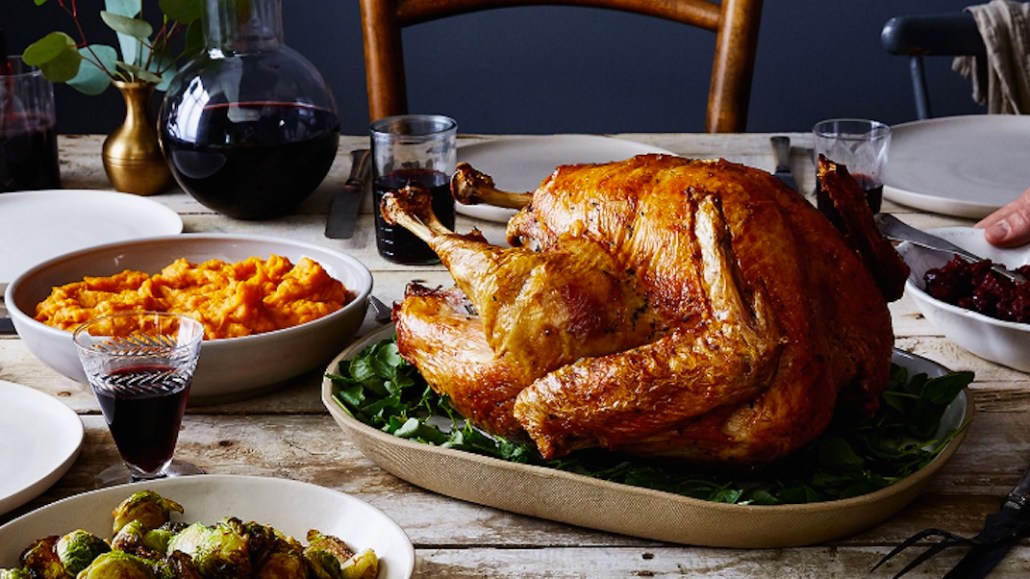 On Wednesday, Food52 will launch its own OTT app, two years after the food publisher first entered the streaming space.

Food52’s first OTT channel premiered as part of streaming service Xumo’s platform in November 2018 and has since averaged 1.9 million views and more than 56,000 hours watched per month. Revenue from advertising on Xumo has increased by 341% since the channel’s launch, according to a company spokesperson.

A year ago, a majority stake of Food52 was sold to venture firm The Chernin Group for $83 million.

But CEO Amanda Hesser and her team sees a larger opportunity to not only increase revenue earned from advertisers on the streaming channel, but to also build out devoted audiences with the OTT platform, despite not having any current plans to tie a subscription model to the app.

The new app will be available on the major streaming services including Roku, Apple TV, Amazon Fire and Android TV.

The company has seen revenue increase by 87% year over year from August 2019 to August 2020, though the company would not disclose its current earnings. Food52 gets north of 80% of its revenue from its e-commerce business, according to the company spokesperson, which has expanded into a marketplace of kitchen and home goods including its own line of products.

The other 20% of the company’s revenue comes from advertising. Revenue from video advertising has increased 150% year to date, while the company’s overall number of brand partnerships have increased by 82% year over year. Behr, The Balvenie and Visit Britain are three of the largest advertisers on Food52’s video franchises, with The Balvenie being the largest advertiser on OTT in 2019.

Planet Oat, a dairy-alternative company, is the launch partner for the new OTT app, which was a deal in the high six-figure range, according to Matt Greenberg, svp of brand partnerships at Food52. He would not disclose hard revenue figures.

As part of that deal, Planet Oat will have its ingredients featured in recipes in several different shows, as well as have its traditional ads in the commercial breaks.

“We don’t think of brand partnerships in silos,” said Greenberg, but “video is something that we know is at top of mind for advertisers.” Therefore, he added, the OTT expansion is part of a larger video strategy for offering more long-form video content that gives the company’s advertisers more options in that category.

A strong appeal of expanding into the OTT space at this moment, according to Paul Canetti, CEO of MAZ Systems, a company that develops OTT platforms for publishers, is that while ad rates are dropping on the internet, OTT CPMS are holding strong in the range of $40 to $60.

“There is also a dream for a [smaller], more dedicated audience, but each person ends up being worth a lot,” said Canetti.

As for next year, Greenberg said his team is planning for the OTT business to grow organically by 150% year over year and to have 10 brand partners working at the scale of the Planet Oat partnership.

The OTT app will launch with five series, said Food52 CEO Amanda Hesser, including three that are being carried over from the publisher’s YouTube channel: “Bake it Up a Notch,” “Big Little Recipes” and “Genius Recipes with Kristen Miglore.” Three additional shows are currently in production to premier on the platform, she added.

Its YouTube channel, which is where the three previously mentioned shows first debuted, saw number of subscriptions and total number of views double year over year, from more than 110,000 subscribers in 2019 to more than 225,000 subscribers this year. The channel is pacing to reach 20 million views this year as well, up from 10 million last year, according to the company.

But Food52 executive producer Gabriella Mangino said that her team is planning for “a lot of overlap between OTT and YouTube” from a programming perspective. The difference between the platforms will be in the audience’s consumption habits, she said.

“On YouTube, we’ll see people jumping from series to series,” she said, with the platform’s algorithm directing viewers to the next video within the same topic versus the next in the series they’re watching. “They’re exploring topics instead of series.”

In the OTT app, however, audiences can sit down and binge a series easily in a way that’s familiar to audiences who are used to binging a Netflix or Hulu show since all three providers now live on the same platforms.

What’s more, the audience that comes to Food52’s OTT app is going to be made up of dedicated fans of the platform, said Canetti. The person searching  for Food52 app “cares in a way that the random passerby [on YouTube] doesn’t,” he said.

Having another long-form video platform is also giving the company more opportunity to hone its internal talent — like Food52’s baking consultant at large Erin McDowell, who hosts “Bake it Up a Notch” — as well as create programming around external talent.

The reason why we’re seeing many more publishers enter the OTT world right now is because the barrier to entry has significantly decreased, according to Canetti, especially for those companies who license the platform technology versus building their own.

He said that a publisher could potentially build their own OTT app or channel for under $100,000 and start competing with the Netflixes and Hulus of the world, whereas that audience was only potentially available to large networks a few years ago.

“There is potential to build up audiences by series,” said Mangino.