‘Fear and loathing in Lisboa’: What’s on the minds of European publishers 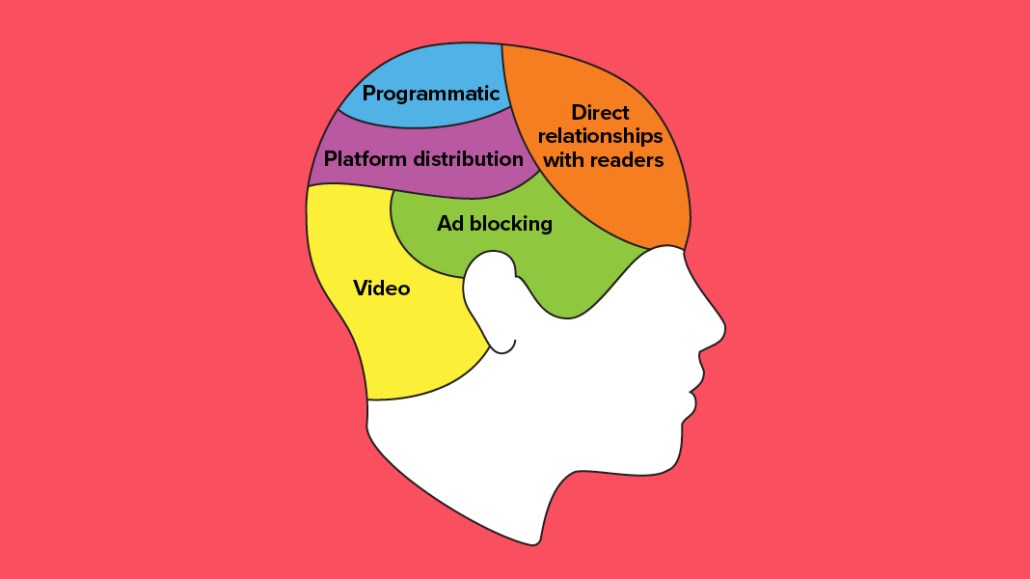 We gathered nearly 200 publishers from across Europe just outside Lisbon for the Digiday Publishing Summit and asked them to — quite literally — map out their minds. From programmatic to video to ad blocking, here’s a peek inside the minds of a few leaders in the field.

Direct relationships with readers
“We need to show the value of premium content,” said Martin Ashplant, digital director of The Metro.

Of course, no one would turn their backs on scale and paying readers, “It’s just incredibly hard to do,” said one executive of a U.K. publisher.

The Telegraph is on its way to figuring it out, having dropped its three-year old metered paywall in favor of a premium paid-for subscription business: they put 20 percent of their content into the subscriptions, the remaining 80 percent is open access. “The propensity for people to pay for media has definitely changed in recent years,” said Robert Bridge, chief customer officer of Telegraph Media Group.

Still, publishers are worried. One characterized the vibe at the Lisbon summit as “Fear and loathing in Lisboa.”

“There is a lot of stress and fear and concern,” said Julian Childs, managing director Business Insider UK, emphasizing the threat platforms pose publishers. “How do you deal with putting your brand on someone else’s brand?”

Programmatic
When it comes to programmatic, there are three things on publishers’ minds: Data, data, data.

As part of that quality experience, she said, direct programmatic buying through private marketplaces or programmatic guaranteed will outstrip the open exchange by 2020. And header bidding will only to continue to evolve throughout the year as server to server will become more of the norm.

Platform distribution and the duopoly
Publishers also discussed the need to return to focus, to emphasize what it is that differentiates them.

Instead, publishers on hand agreed that — whether they be a local newspaper or a niche media vertical — they should focus on that point of differentiation and use platforms to play up their unique branding. Instead of using Facebook and Google as distribution platforms, for example, publishers should look at them as the top of a conversion funnel. Publishers should use them to drive subscriptions, get readers to download the app, whatever the publisher’s own goal ultimately is. (Tellingly, the Telegraph’s Bridge said Apple News has emerged as one of the best platforms for converting readers to subscribers.)

“Interestingly Google is more seen as friendly to publishers,” said Ashplant. “It feels like Facebook is the bigger threat.”

Ad blocking is still lurking
The conventional wisdom that has emerged in recent months is that ad blocking has ceased to be a threat. Ad blocking, which emerged over a year ago as a major threat to digital publishing, has stabilized and even fallen off for many European publishers. But there is danger in complacency.

As of now there is no credible threat to advertising on mobile, which is where a majority of readers have migrated. But that’s not to say it isn’t coming. “There’s a lack of urgency,” said Pete Wootton, managing director of Dennis Digital. “But it’s a false dawn. It’s going to get worse. Mobile is coming.”

To get started, publishers need to get better at measurement. Several on hand admitted to not even knowing what their ad blocking rates are. “You can’t miss what you can’t measure,” said Wootton. “You need good tracking and measurement — by device, by referral.”

And in the meantime, publishers agreed, there should be more collaboration across the board — with each other, and with Adblock Plus, said Wootton. “We can all encourage users to see this value exchange.”

Video on the rise
Publishers at the summit largely agreed they planned to ramp up video production in 2017. However video has its own set of challenges, beyond the technical skill and cost required to create it: There is, to begin with, a lack of clarity on measurement.