Facebook’s planned “dislike button” appears to have more than one button.

Launching tomorrow for users in Ireland and Spain, Facebook is rolling out a “Reactions” feature that shows fives faces expressing different emotions, along with a heart to signify love and the iconic thumbs-up button marking a major change from its current single “like” option.

The change comes about a month after Facebook CEO Mark Zuckerberg announced the platform was working on a dislike option, but it wouldn’t be a solely a thumbs-down button.

“I think giving people the power to express more emotions would be powerful, but we need to find out the right way to do it, so that it is a force for good and not bad and demeaning the person out there,” he said last year.

This is what he means. Here’s what they look like:

As seen in these screenshots captured by VentureBeat, the options will be placed where the like button is under statuses and multimedia. People now have the ability to “love” that adorable cute puppy photo or express anger in less than desirable situations. 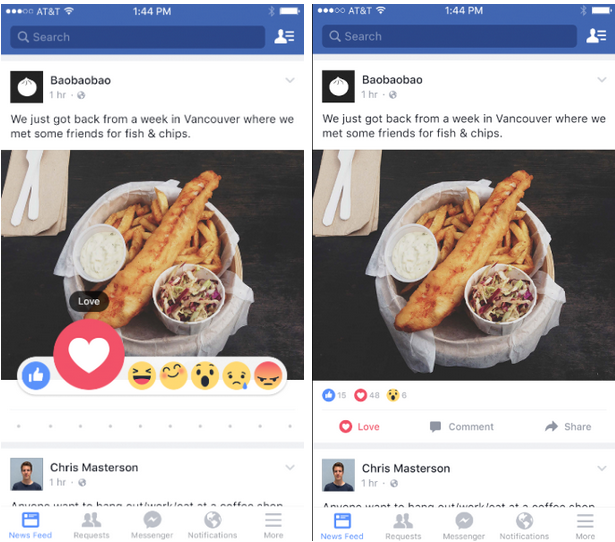 Reacting with multiple emotions is not new, obviously, with platforms like Path or Slack and publishers such as BuzzFeed and People offering the options. Brand pages will also have the options in its posts, as seen above.

Facebook tends to test new options in smaller countries before launching globally, but it will likely appear for all users by the end of the year.

Facebook did not immediately respond to our request for comment, so we’re giving them a sad face.