Why Facebook’s app strategy is flailing

Until this past spring, Facebook’s unofficial motto was “Move fast and break things,” an ode to the company’s philosophy of pursuing and giving up on new features with reckless abandon.

While Facebook’s motto has changed — it’s been replaced with the slickly-worded “Move fast with stable infra” (sic) — Facebook has proven it’s still willing to throw resources at new features. News that the social network is creating an app that will allow for anonymous or pseudonymous sharing among users is in line with Facebook’s strategy of creating non-Facebook-branded apps that cater to more singular uses than Facebook proper. It’s largely a defensive measure against the host of increasingly popular single-use apps that have arisen in recent years.

The only problem is that every standalone app Facebook has created thus far has been a flop with users, and that the app Facebook will reportedly soon debut is entering an increasingly crowded marketplace dominated by the likes of Secret, Whisper and Yik Yak.

“Not to antagonize Facebook, but let’s get real about what they can and can’t do. Paper is a non-entity. Slingshot is a non-entity. The only reason anyone downloads Messenger is because they’re forced to, and it has one star in the App Store,” Neetzan Zimmerman, editor, at Whisper, a popular anonymous-sharing app that has tens of millions of registered users.

Paper was the sharply designed news reader app Facebook released in February, which has failed to attract a large audience, and Slingshot was the Snapchat clone Facebook released in June to little user interest (it ranks at No. 483 and No. 335 in Apple’s and Google’s app stores, respectively). Those apps seem destined to join Poke (a previous Snapchat copycat) and Camera (an Instagram imitator), the two apps Facebook shuttered in May due to lack of audience.

The only non-Facebook Facebook app that has caught on with users is Messenger, but that’s largely due to Facebook giving its users little option but to download it. Those users seem less than thrilled; the app is rated one-and-a-half stars out of five in Apple’s App Store, and of the 3,830 ratings, 3,069 are one-star ratings.

Facebook product manager Josh Miller is leading development on the forthcoming anonymity app, but Facebook did not respond to requests asking to speak with him about the project.

Miller recently unleashed a series of tweets about what makes anonymity-based apps special.

1/ Anonymous Apps: Identity isn’t a product goal. Focus should be on what human desire you want to enable, not anonymity as the focal point.

2/ Anonymous Apps: Even then, it’s very hard to build retentive communities without “regulars”. You need some sort of recurring identity.

But the below tweet, which Miller sent in September and has since deleted, may give an indication as to what Facebook will debut. 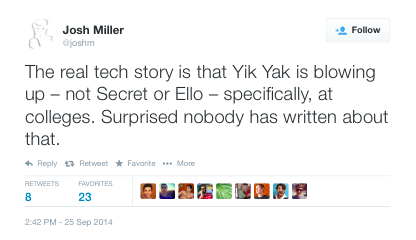 Yik Yak is an anonymous sharing (read: gossiping) platform popular among college-aged students, an age group in which Facebook’s popularity has waned recently. But some industry watchers are saying Facebook’s forthcoming anonymous-sharing app will likely languish as Poke and Camera did.

“Facebook’s confused. They want people to share their stories, but if they want to do it anonymously, it seems to go against the essence of Facebook,” said Rohit Thawani, TBWA\Chiat\Day’s director of digital strategy. “This is going to be another Facebook Paper. We’ll forget about it in another two months.”

But Facebook must disregard past failures and continue building new products if it wants to maintain its position as a leading digital ad platform going forward, according to Mindshare’s chief strategy officer Jordan Bitterman.

“This is something that Facebook has to do. They’ve been very good about finding growth areas that other companies have identified and moving into the spaces and harnessing them for themselves. [Anonymity] is obviously something they’re thinking they need to be a part of,” Bitterman said. “Like with WhatsApp, if you take too long, it’ll cost you $19 billion.”

Indeed, Facebook has been successful at creating a suite of apps via acquisitions, such as the messaging-focused WhatsApp it bought earlier this summer and Instagram, which Facebook acquired for $1 billion in April 2012.

Which has Whisper’s Zimmerman theorizing that Facebook would be smarter to purchase an anonymous app company, like, oh, maybe Whisper. “If that’s what you want to do and there’s someone already doing it well, maybe you should be considering acquiring them instead of mounting a challenge which is going to be a much longer slog,” Zimmerman said.