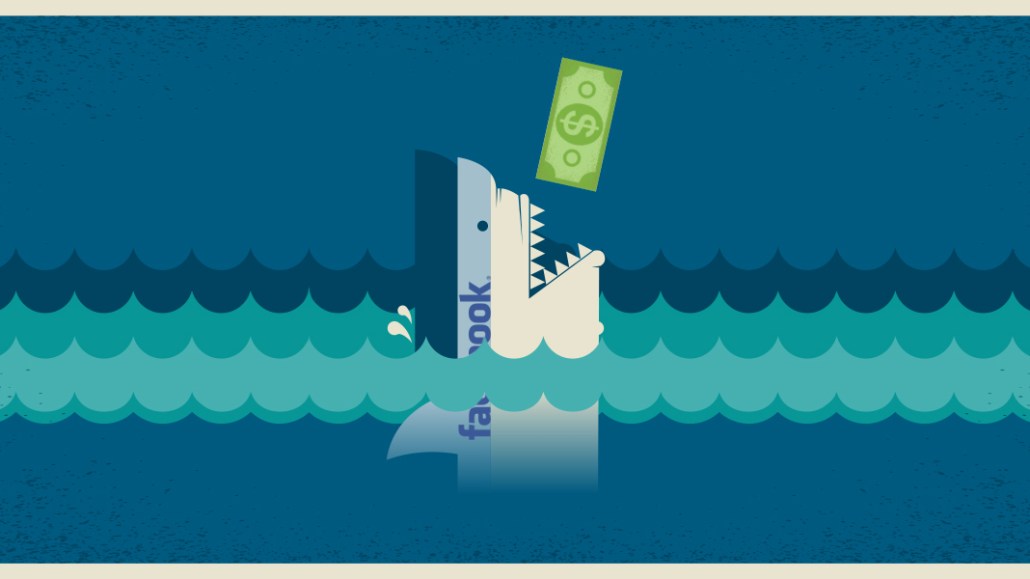 Facebook’s news-feed change is likely to cut into the money publishers can make from producing and distributing custom branded and sponsored editorial videos on the platform, their top source of revenue on Facebook.

Top Facebook publishers can nab a 50-70 percent margin on custom branded videos they distribute on Facebook after paying for production and paid media, according to four publishing sources, including three executives from publishers with at least a billion monthly views on Facebook. With Facebook counting views at 3 seconds, the cost per view has been incredibly low — “less than a penny,” one source said — which means top publishers can scoop up plenty of ad dollars based on their organic reach on Facebook.

There was even more money to be made from sponsorships of editorial videos that publishers already had on their schedule and required no additional production dollars — “essentially free money,” as one exec at a top Facebook publisher said. And it helped that the typical, made-for-Facebook news-feed videos — short, silent, text-on-screen autoplay clips — are cheap to churn out.

Facebook is about to get more costly
With Facebook clamping down on media within the news feed, these executives have legitimate concerns that it could impact how much money publishers can make from custom and sponsored videos. For instance, the cost models for branded content will likely change. As three executives said, it will cost more to run paid campaigns to seed videos in front of users in the news feed, which will cut into profit margins.

“My gut says a lot of people are going to have to increase paid budgets to hit their guarantees,” said one CRO of a digital publisher. “Candidly, does that change anything? I’m not sure — a lot of people were already masking that they were putting paid media behind some of this content — but it probably will affect the bottom line in some way.”

How much this impacts publishers’ overall revenues remains to be seen.

“No one knows what’s going to happen, so we’ll wait and see what this means for our branded stuff — we might have to charge more,” said one executive at a publisher that reaped “eight figures” in branded video revenue from Facebook in 2017.

One potential way to make up for losses in branded-content revenue is producing brand-funded shows for Facebook Watch or selling sponsorships into existing Watch programming (with the exception of Facebook-funded shows). One top Facebook video publisher said it’s been pitching advertisers on broad campaigns that include sponsorships of some of its self-funded Watch shows. This assumes, of course, that Facebook keeps prioritizing Watch programming in the news feed.

“Facebook wants people to watch longer videos so they can get to the pre-rolls and mid-rolls, but no one is going to Facebook for that right now,” said the CRO. “The hope is that the news feed is going to favor [Watch] so people can hit the mid-rolls.”

“We’ve been waiting for this [change] for quite some time, which is one of the reasons that we leaned so, so, so hard into Watch in the first place,” said the CEO of a big digital publisher. “This move makes Watch an even bigger focus.”

Top digital publishers say they have a better safety net
According to Digiday research, 86 percent of publishers make 25 percent or less of their video revenue on Facebook — which points to how unsuccessful Facebook has been in building an ad revenue-sharing product that works for media companies. But almost all the video ad dollars publishers can make on Facebook come from branded content, not Watch, publishing executives said. Even if Facebook isn’t the biggest driver of video revenue, it’s responsible for a decent chunk for many publishers.

Multiple bigger digital publishers are banking on the idea that their businesses are becoming diversified enough that the news-feed changes won’t hurt them as much as it will publishers that heavily rely on Facebook for reach and revenue. One head of a brand content studio at a top Facebook publisher said roughly 15 percent of the company’s revenues — “single-digit millions annually” — come from custom videos solely produced for Facebook. This company also distributes branded videos on YouTube, other social platforms and its own website, which will ideally mitigate the impact of Facebook’s changes.

“I do think [the changes] are going to whittle away a fair amount of the digital players that are out there, but for ourselves, we have some time to figure this out,” this exec said. “You never want 90 percent of your business from something you don’t control.”

Other Facebook video giants point to their organic reach on the platform — their ability to get videos watched and shared without running too much paid media behind it — as a reason they’re not too worried about the algorithm change.

Attn, which did more than 463 million video views on Facebook in December, according to Tubular Labs, said its branded-content engagement is 4.4 times higher than the Facebook average, citing data from research firm Brandtale. Attn co-founder Matthew Segal pointed to a recent six-minute branded video featuring Keith Richards and Sheryl Crow, which has more than 3.5 million views and 38,000 shares, as evidence of its success in this area.

“Very few people are accidentally watching a 6 1/2-minute-long video featuring older rock stars,” Segal said. “They are making an intentional decision to watch it once they see it on their feed, which Facebook wants.”

Publishers are looking to diversify beyond Facebook
There’s also an opportunity for top digital publishers to sell branded video campaigns that run across other platforms in addition to Facebook.

This is what BuzzFeed does, charging a flat cost per view and guaranteeing total views across multiple platforms, including YouTube and its own site, according to a source and confirmed by the company. BuzzFeed also pointed to its expansion of its Tasty and Nifty brands, built on Facebook, to Snapchat Discover and other platforms. BuzzFeed also has an entertainment division creating shows for YouTube, streaming platforms and TV, and has been building out its commerce business, a company spokesperson said.

Bleacher Report, too, has been diversifying its business with entertainment programming, growing its app audience and other ventures.

“A lot of media brands, Bleacher amongst them, made these changes because we saw [Facebook’s move] coming for a long time,” said Howard Mittman, CRO and CMO of Bleacher Report. “It’s the ones who got over their skis and relied too much on a single distribution mechanism that will have trouble.”

Meanwhile, those looking for a quick near-term fix see Instagram as the natural place to look for revenue — and those willing to take some time and invest in platform video programming can move resources to YouTube. (Snapchat, meanwhile, is about to go on a publisher charm offensive.)

“You’re going to start seeing Instagram cluttered with even more video because it’s the same format as Facebook news feed,” said the digital publisher CRO. “In theory, you can still get organic reach on Instagram — until [Facebook] corrects that, too.”

Unfortunately, Facebook’s news-feed change could also lead advertisers to conclude they don’t need publishers to create and distribute content for them. If brands can hire studios directly and pay for distribution on their own channels and get the same reach, why work with a media partner?

Said the CRO: “The big thing is, if the organic reach also sucks and it doesn’t matter if the video comes from a brand or publisher’s handle, brands have lost the reason to distribute with publishers.”