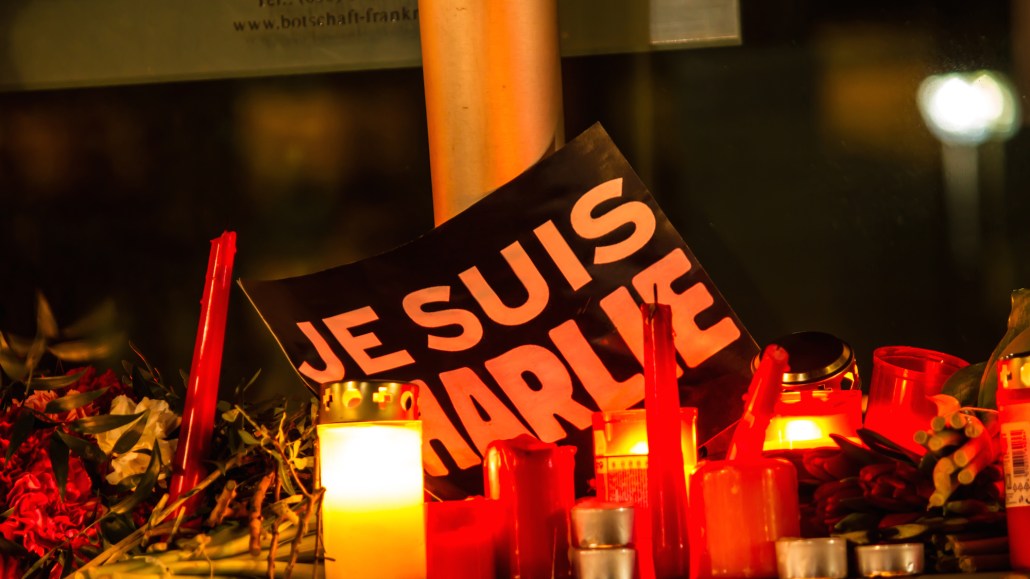 When tragedy struck Paris on Wednesday — 12 people were shot at satirical newspaper Charlie Hebdo — news of the event was immediately shared on Twitter, as per usual. By early morning on the East Coast, Charlie Hebdo was a trending topic in multiple locations around the world.

But the news had yet to disseminate at the same rate through Facebook, where news about the shootings was at the bottom of the social network’s recently created trending topics section, behind such news stories as rapper Ludacris’ long-awaited marriage to girlfriend and the reappearance of former Baywatch star Yasmine Bleeth. It didn’t take long for the shootings to climb the trending topics section, however. And by the evening, news feed was riddled with news stories about the events, a testament to the social network’s recent efforts to surface more timely posts and news stories to its readers.

Facebook’s emphasis on being a more credible real-time news source came this fall, immediately following its failure to disseminate news stories about the shooting of 18-year-old Michael Brown and the subsequent string of protests in Brown’s hometown of Ferguson, Missouri, relative to its nearest rival Twitter. While Twitter users were constantly being updated with the unrest in Ferguson, Facebook users were enjoying light-hearted Ice Bucket Challenge videos. Facebook was a major contributor to the so-called “filter bubble” in this respect.

Facebook has since made a concerted effort since then to help users better discover and follow timely news stories. In September, Facebook updated its news feed algorithm so as to ensure users didn’t miss time-sensitive posts. The announcement never mentioned Ferguson factoring into the decision, but the timing implied as much. Two months later, Facebook delved even further into breaking news by bringing its trending topics feature to mobile and adding new sub-sections including live feed, a Twitter-like, real-time feed of people’s reactions to the story.

So while Facebook still lagged behind Twitter on the Charlie Hebdo story, its quick ascent through Facebook’s trending topics suggests the social network has made strides in becoming a more reliable real-time news outlet. The question is, whether Facebook can ever effectively compete with Twitter in that respect, or whether it should be trying to in the first place.

“These properties should be who they are. Facebook doesn’t need to be Twitter. Twitter is lightning quick,” said Jason Newport, head of mobile at media agency Carat.

Not that Facebook couldn’t become a real-time news source, Newport said. Just less than a third (30 percent) of Americans used Facebook to consume news as of October 2013, according to the Pew Research Center, and that figure has likely risen due to Facebook’s recent emphasis on more prominently featuring publishers’ posts. Becoming a real-time news source could result in users visiting Facebook more times per day, and thus allowing Facebook to serve a greater number of ads.

“Facebook needs to do everything it can to make people come back often, and one way is to make sure what’s in people’s feeds is the most interesting to them,” according to Debra Williamson, social media marketing analyst at research firm eMarketer. “That can be posts from their friends, or breaking news.”

Facebook establishing itself as a premier breaking-news destination also opens up some new revenue opportunities for Facebook; namely, the kind of live event and television advertising tie-ins that have been so lucrative for Twitter. Live events have also been a point of emphasis for Snapchat and its burgeoning ads business.

Jeanne Bright, director of paid social at DigitasLBi, said that although Facebook’s audience is several orders of magnitude larger than Twitter’s, Twitter remains a must-buy for brands trying to align themselves with live events.

“We know consumers are going to Twitter to talk about it,” she said in an earlier interview, “and they’re not doing it on Facebook.”

Facebook inched toward live-events advertising in late December when it started posting NFL highlights in news feed, a move straight out of Twitter’s playbook. The videos were followed by ads from Verizon, which also paid to promote those videos in users’ news feeds.

That Facebook followed Twitter’s lead in that respect is no coincidence.

“Twitter and Facebook just go back and forth and just copy each other all the time,” Newport said, pointing to how Twitter’s profile page layout now resembles Facbeook’s. “It seems like they’re always looking over their shoulders.”