Publishers may have bones to pick with Facebook over declining organic reach and monetization issues. But that hasn’t stopped them from buying a lot more traffic from the platform lately.

According to analysis of over 1 million dark posts, or paid posts targeted at a specific audience segment on a platform, shared by more than 400 publishers, the average number of paid monthly impressions from Facebook over the past 18 months has more than doubled, according to Keywee data.  Those publishers run the gamut from independent business publishers to mainstream entertainment-focused ones.

While there have been stories across the board of publishers seeing their organic reach continue to decline, the Facebook-focused vendor said it doesn’t see its clients spending to make up for those declines. Indeed, the peaks and valleys in Keywee’s data map more closely to the rhythms of the U.S. presidential election than to the reported stories of declining reach.

“Publishers aren’t promoting content to ‘compensate’ for possible loss of organic reach,” Netta Kivilis, Keywee’s vp of marketing, wrote in an email. “They are finding ways to distribute content profitably on Facebook to achieve their business goals.” 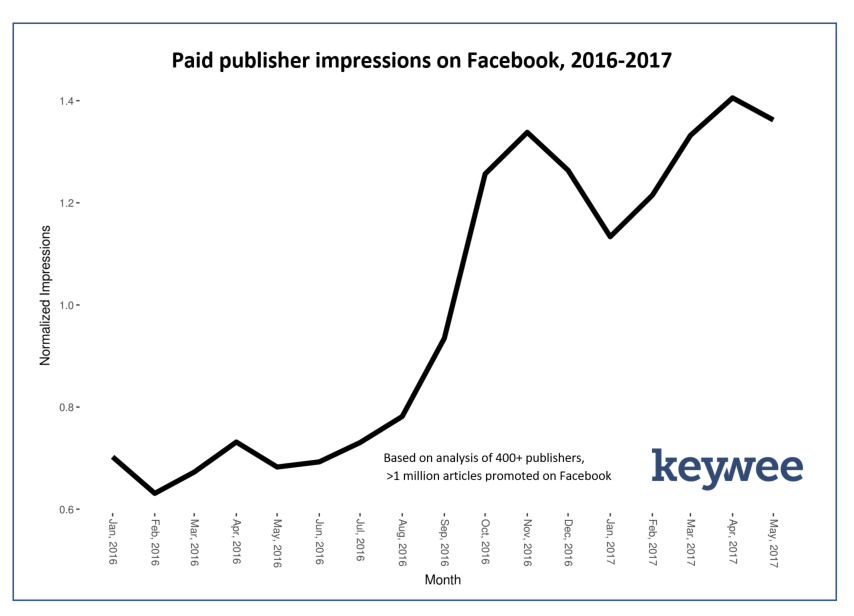 The Keywee analysis does not include raw impression data. Instead, it takes the monthly average of each publisher’s paid Facebook impressions and averages those in turn to get a look at the overall trend. A separate chart that breaks this trend down by publishers’ content category reveals that entertainment-focused publishers are paying for a greater percentage of impressions now than they were 18 months ago, compared to news-focused publishers.

The practice of buying traffic on Facebook is widespread but rarely discussed in public or on the record, and the list of goals Kivilis alluded to has never been longer. While some publishers depend on Facebook for as much as 90 percent of their site traffic, according to NewsWhip, a growing number of them use Facebook dark posts to drive everything from subscriptions to video views to email newsletter signups. In the past year, Facebook has added the ability for publishers to do many of these things, such as capture email addresses, directly inside its platform.

Facebook is also a popular distribution channel for publishers looking to make good on their sponsored campaign audience guarantees. Kunal Gupta, CEO of native ads platform Polar, estimates more than 90 percent of the publishers that create branded content for brands buy some of their traffic on Facebook.

Some, surely, use the practice for arbitrage, too, though the price for doing so typically has to be quite low, which can be tough to maintain on posts that aren’t engaging for Facebook readers.

“As long as those publishers have strategies based on audience data that aim to capture that engagement and turn it into a longer-term goal, like subscriptions or brand loyalty, then that’s a great use of spend,” said Sachin Kamdar, the CEO of audience referral tool Parsely. “If they’re simply looking for eyeballs to a post, it may be money down the drain.”

Publishers also like Facebook as a traffic source because the scale of its audience and the breadth of its targeting capabilities are unmatched. “[Facebook’s] targeting capability is leap years ahead of most rivals,” said one audience development executive at a digital tech-focused publisher. “The problem for most publishers is the limited and ever-decreasing ability to generate a profit.”