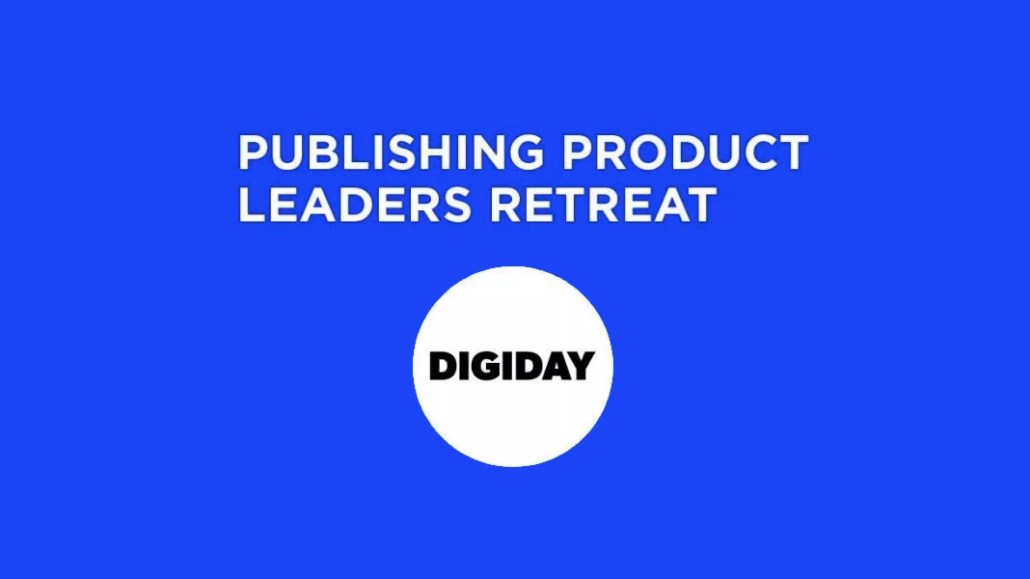 At the first-ever Digiday Publishing Product Leaders Retreat, over 50 product heads from across the media industry gathered to discuss the shifting roles that they play in their organizations.

Data keeps getting more important, but gathering and managing it remains very difficult

As publishers juggle more priorities, they need better data from inside and outside their organizations to make decisions. But good data is hard to collect and manage for a whole host of reasons. And using it properly isn’t easy either.

There are several publishers who now regard their first-party data as their most important asset. But even for them, there is a long way to go before it is treated that way within their organizations.

The era of hunches is over

As imperfect as data collection might be, most publishers are gathering enough of it to change how they think. Instead of trying things out simply because a senior executive wants to, stakeholders are expected to make cases for why even a small change to a publisher’s site or app makes sense, and how that change will affect other facets of the company’s revenue or strategy.

Most publishers are open to trying new things. But there are burdens of proof that must be met before any kind of change is implemented.

Balancing big and small is a major challenge

It is difficult to think about the future of media and design and product when your team is busy putting out small fires. For many attendees, centralized product and development teams typically had to make big projects, such as site redesigns, happen on the side, rather than the other way around.

Resources at most media organizations will remain scarce, so finding ways to work on both big and small projects could be a persistent challenge.

The coming privacy regulations could wreak havoc on advertising and subscriptions

Many publishers are growing nervous about what privacy regulations including the General Data Protection Regulation and the California Consumer Privacy Act will do to their ability to gather data on their audiences and give them an experience that is personalized.

The so-called “post-cookie” future could change the way publishers think about the advertising opportunities their sites offer to marketers. It will also force them to quickly find ways to create direct relationships with their readers.

Justin Law, chief product and technology officer, Meredith
By this time next year, Meredith’s 40-odd sites will look and feel very similar, thanks to a design template on the front end and newly built user and content graphs on the back end. The graphs are designed to help Meredith increase audience engagement by providing content tailored to each visitor’s interests.

Nina Gould, vp of product, Forbes
For its first site redesign in six years, Forbes had accumulated a long list of needs. But the site’s product team decided to set time and scope parameters to avoid getting mired in a project that could take more than a year. The business news publisher’s product team took six months to execute the first phase of the redesign.

“If a senior exec comes to you and says, ‘You must do x by y,’ that’s usually a sign that it’s going to fail.”

“How do you teach people to only rely on official, approved company data instead of going out and using whatever they find?“

“The marketing team is the team who puts the wow factor on our slide decks, the first few slides. But now when you want to get into the meat of the information, you go to the product team. We’ve finally won that battle.”

“Getting the executive team to empower the product team as the controller and owner of company data is critical.”

“A single source of truth ensures that you can get your team’s correct data. So when somebody makes a poor decision off the data, at least we’ve eliminated the variable of making a bad decision off wrong data. The data is at least correct.”

“(A good data strategy) is a very big, hard thing. You can vouch for it and talk about it, but you can’t make it happen by yourself. It’s easier to do that when you have massive buy-in from leadership to organize around solutions.”

“GDPR and CCPA are highlighting to legal and executive teams how much of a problem a fragmented or non-existent data strategy is. It’s like, ‘Wait, why is Johnny building a database? And he’s collecting what!?”