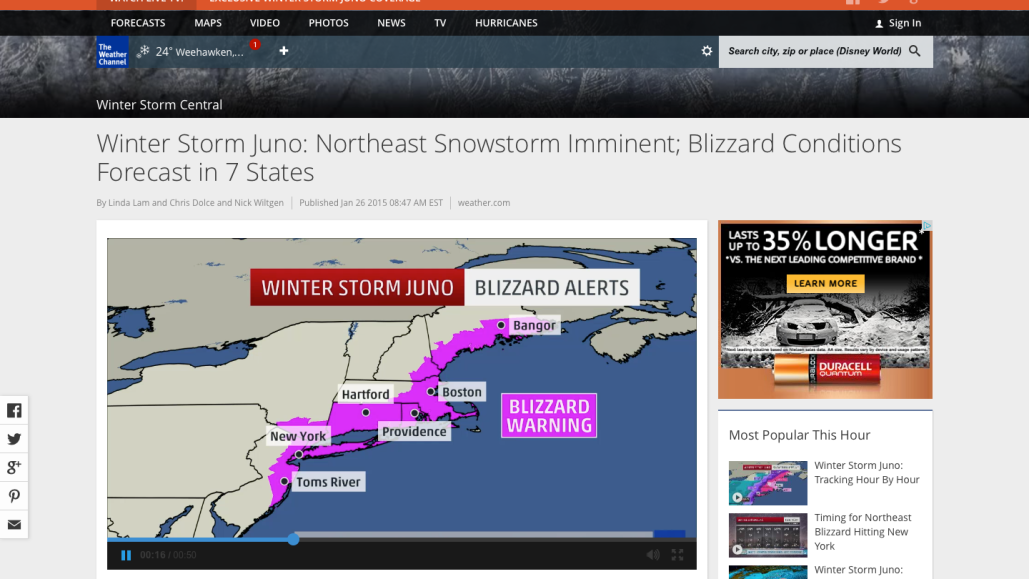 When it came to Winter Storm Juno, what’s bad news for the East Coast was good news for Weather.com.

Severe weather conditions are a bit like the Super Bowl for Weather.com, which typically sees up to a 50 percent traffic increase in the days leading up to and following major winter storms. That’s largely thanks to the site’s exhaustive coverage, which includes text updates, live broadcasts and pre-recorded video.

Traffic spikes, however, aren’t of much use if they can’t be monetized. In an effort to scale its inventory sales to its increased traffic, the Weather Company has built a sales process and ad tech infrascture that combines the automated promises of programmatic buying with stability of direct sold deals.

“We’re planning for this to be a weeklong event. These are the record days of the year for us,” said Jeremy Hlavacek, vp of programmatic at Weather.com, who added that the company’s sales team had been reaching out to brands and agencies since late last week about its upcoming inventory availability. An update posted to Weather.com’s Forecast Factor blog also alerted marketers about the site’s upcoming opportunities.

This week’s traffic spikes are also a boon for Weather.com’s video sales. More traffic means more video inventory, which the site typically sells out of. “I’ve had people knocking on my door for months asking us to give us more video. I called them up last week and said, ‘get ready,’” Hlavacek said, adding that bidding for the site’s video inventory often results in higher CPMs.

All of this underscores the promise of programmatic, which lets publishers ramp up inventory supply while giving the buy side a better idea of what’s on the market. The traditional RFP and insertion order process can’t match that speed or efficiency.

But it’s not all automated. While The Weather Company gets plenty of exchange traffic during storms, its direct sold deals also include campaigns that activate during severe weather situations. These direct sold deals also tap into the Weather Company’s WeatherFX data, which lets marketers target people based on the weather at their location. A retailer targeting people affected by Winter Storm Juno can, for example, push them to their stores to buy a winter coat or shovel. Hlavacek said that The Weather Company does plan to bring similar functionality to its exchange-based deals this year, however.

But while some brands might see opportunity in targeting people affected by severe weather, others often see it as another case of questionable brand opportunism, particularly when it comes to disasters that claim lives. Creative for a Duracell campaign that ran on Weather.com on Monday, for example, featured an image of a snow-covered car crushed by a downed tree.

“Appearing like you’re capitalizing on tragedy isn’t a good look for any brand,” said John Douglas, director of product strategy at Sizmek, which added weather-based targeting to its programmatic buying platform last June. “Whatever you do has to be done in a genuine way. Brands that aren’t genuine fail.”

Weather.com, for its part, understands the risks.

“It’s definitely a challenge for the brands that work with us,” said Randi Stipes, vp of ad sales marketing at Weather.com. “We’re always working closely with them to make sure they’re not appearing opportunistic.”