‘We don’t know what’s going on in our wrapper’: Publishers’ candid thoughts about ad tech 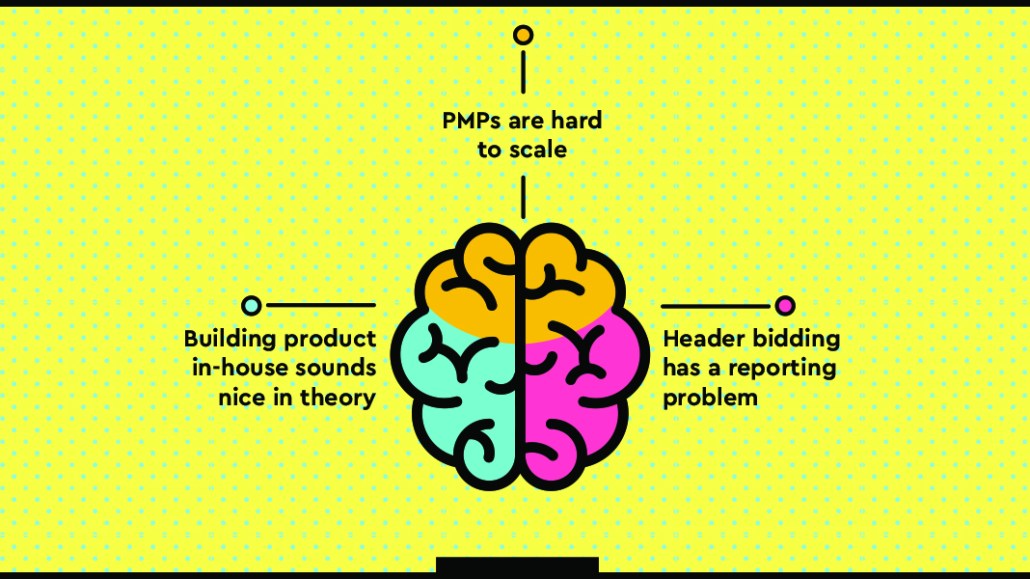 This week, 300 publishing and ad tech executives gathered at the Digiday Programmatic Media Summit in New Orleans to discuss the biggest challenges in programmatic on the sell side. Conference attendees and speakers shared candid thoughts, not for attribution, in working group meetings and over drinks.

Publishers’ major concerns include deficient reporting from their header bidding vendors, as well as difficulties in developing in-house products and scaling private marketplaces.

Excerpts of what we heard offstage at the event appear below.

PMPs are hard to scale
“It’s a plateau for big publishers, but small publishers or local media companies are still playing catch-up.”

“Scalability is the biggest challenge. We set up PMP deals but never transact.”

“Our programmatic business is pretty small, but around 80 percent of that comes from PMPs. We encourage PMPs and programmatic guarantees because of domain spoofing and fraudulent impressions. We have contextual data that advertisers can’t find anywhere else.”

“We use PMPs to funnel people to programmatic guarantees.”

“PMPs don’t scale because clients are very focused on audience targeting and specific geographies. We try to be transparent with buyers and tell them that they need to be more flexible with their targeting.”

“We spend lots of time chasing what’s happening on the buy side, although we don’t necessarily have the information needed to help them.”

“Publishers can’t manage a million different buyers, but publishers can control the number of SSPs that they are working with. Working with more than five SSPs on PMPs is intense — it is hard to manage potential troubleshooting on the buy side if you work with more than a couple of SSPs.”

“We use signals like ad budgets to prioritize PMP deals. If we see a buyer not spending for two weeks, we will deprioritize them.”

“We won’t do PMPs for advertisers who want to do one specific market. We push them from PMPs to programmatic guarantees.”

“Our salespeople are excited when they get a $5,000 PMP deal per month, but the ad ops people say that we can only deliver $500 value [of impressions]. In my opinion, ad ops are the most strategic people in my company, but they get yelled at by the sales team a lot.”

Header bidding has a reporting problem
“We use Index [Exchange’s] wrapper and Amazon’s wrapper. The reporting from my wrappers is not top of the line — I need someone else to do the reporting for us. I think Index is working on a reporting tool called Pulse, which hopefully can change the current situation.”

“At the end of the day, we don’t know what’s going on in our wrapper.”

“At the moment, most wrappers only provide very basic SSP-level data on how long it takes an SSP to respond to a bid request, but there’s no way for us to get DSP-level data, like how much a DSP spends on our site, and even better, brand-level data like if P&G spends programmatically on us, for instance.”

“Outside of major publishers, header bidding is still nascent because smaller players don’t have the capability to manage header bidding, and SSPs are less interested to work with them.”

“Publishers can definitely develop their own SSP instead of paying each vendor 20 percent of their revenue. But they don’t want to do it because they need someone to take the blame when things go wrong.”

Building product in-house is not feasible
“Our development team tried to build an ad server, and the project was a waste of time that went nowhere. We start so many projects that we never complete, even though our resources are already spread thin.”

“You can only yell at your development team so much because you need them to do other stuff for you, and you need to keep them happy because it isn’t easy to find tech talent. But if you use a vendor, you can yell at them all you want because they want your money, and they aren’t going anywhere.”

“We have data analysts in tears because they can’t figure out how to match up the key metrics in our ad server since its setup is such a mess.”

“The Washington Post is licensing products they’ve built, and that sounds like a nice business to be in. But they have a whole separate team to sell those products, and they have the backing of [Amazon CEO] Jeff Bezos. We don’t even have enough salespeople to sell our direct inventory.”