Does TV Really Need Its Own QR Codes? 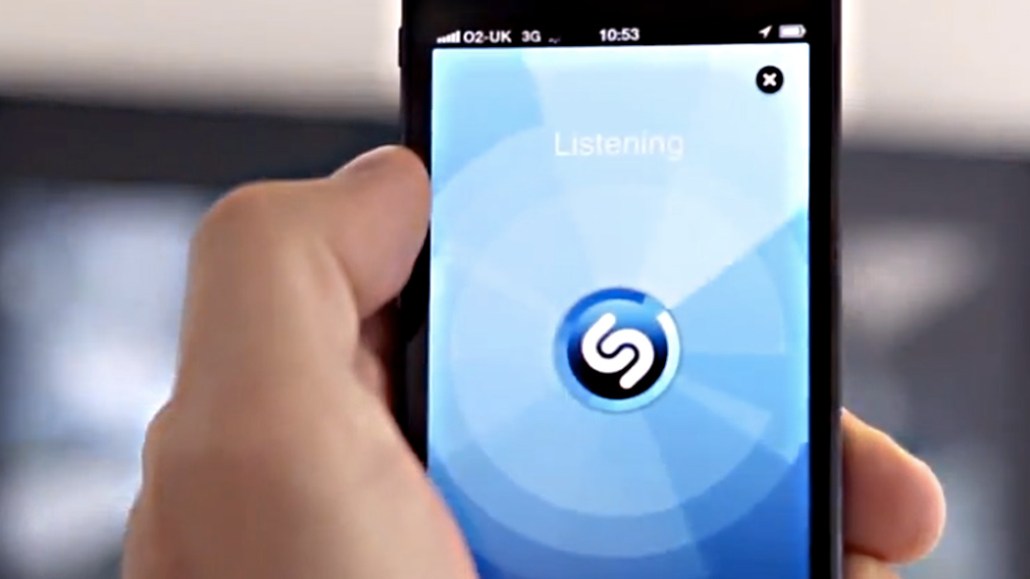 The next time you’re zoned out on the couch in front of the tube, you might notice that many TV commercials now feature little blue buttons prompting you to whip out your phone and “Shazam this ad.”

That’s easier said than done. By the time you’ve taken the commercial’s advice and decided to give it a shot, you still have to find your phone, unlock it, find the Shazam application, open that, and let it listen to the ad for a few seconds before your reward of more  advertiser content is revealed. All this in 30 seconds or less.  And that’s assuming that you’re not a cord cutter and you already have the app installed, of course.

It’s a long shot to expect consumers to Shazam ads en masse any time soon, yet the well-funded audio recognition company is doing its best to convince marketers that its tagging technology represents the perfect mechanism to extend their messaging beyond TV screens and into users’ palms. Think of it as a QR code reader for TV ads.

And yet, this is not a Shazam-is-doomed story. Far from it. The thing is Shazam’s TV ad-tagging tech has a lot going for it that almost assures you’ll keep seeing those blue overlays in the corner of your screen. That’s because Shazam is easy for advertisers to implement, comes relatively cheap, has the veneer of innovation and, best of all, can actually yield some useful data.

The concept is a decent one in theory. Viewers pull out their phones during an ad, tap Shazam, and they’re directed to exclusive branded content, experiences, even special offers by the same advertiser. The problem is, this is from the marketer’s perspective. It is hardly guaranteed many people will actually do so in practice. Some of Shazam’s 75 million monthly users inevitably will, but advertisers generally buy TV for its scale benefits, not its ability to reach small, niche audiences.

Naysayers are easy to find. A Twitter search reveals users mystified by how and why they might “Shazam” an ad. Others question whether it’s physically possible for users to locate their phones and open the app in the 30 seconds TV ads typically last.

But when it comes to explaining why they chose to partner with Shazam, the response from marketers appears to be little more than “why not?” Much like QR codes, marketers admit that the response rates aren’t huge, but say the data Shazam collects might still be valuable for the prices they’re charging. U.S.-based agency sources say Shazam is currently asking a one-off fee of around $25,000 for an integration, which, if you’re spending millions a month on a TV campaign, is a drop in the ocean. They’re cheap, easy and might prove relatively useful.

“The question is just one of mathematics. If the response rates justify the cost, then it might well be worth it,” said Ben Kunz, Mediassociates strategic planning head, whose agency has recommended some of its clients test Shazam.

According to Shazam’s Danker, one of his product’s strengths is that it delivers content to users that are already highly interested in an advertisers’ offerings, even if it might not be audiences of millions. Consumers that go to the effort of Shazamming an ad are probably highly qualified ones as far as brands are concerned, he said.

“People don’t accidentally Shazam,” Danker explained. “That means advertisers reach exactly the audience they want.” He added that the company is working on technology that allows users to have the app always listening, if they choose, which it hopes will make it easier for users to go back and interact with advertiser content after an ad has aired, if they want.

But the company has its work cut out if it really wants to turn Shazamable ads into a significant business. To start, it’ll probably need to start charging more than $25,000 per campaign integration, or on an impression or interaction basis.

That said, marketers remain open-minded. Ultimately, it just comes down to the numbers, they say. If Shazam can add value, marketers will be happy to pay.

“It’s worth testing, and from what I’ve seen, Shazam certainly offers a wealth of interesting data and downstream metrics,” Kunz concluded. “At end of the day, they won’t succeed if they can’t prove results. Nobody’s going to use it for more than a month or two if it doesn’t provide some value.”