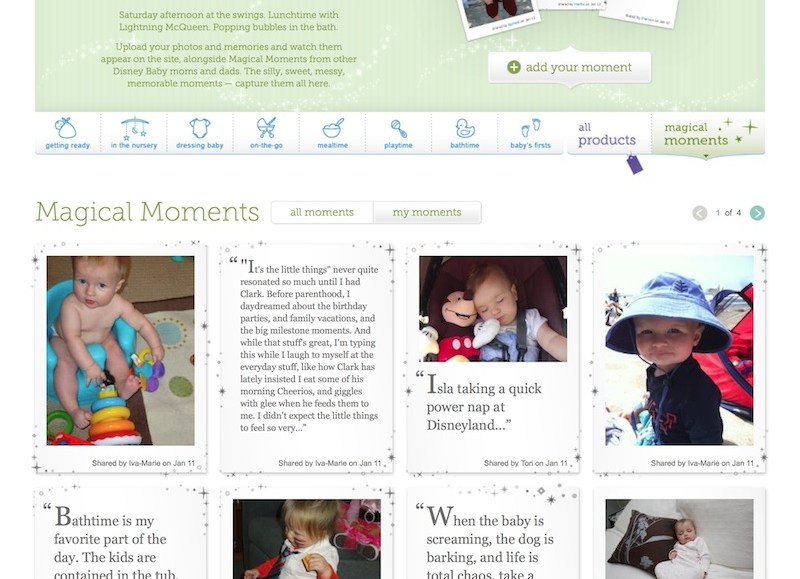 Disney has long been able to infiltrate nearly every stage of kids’ and their families’ lives — except during the very beginning. You’ve got the Mickey and Minnie classics for those preschool years, Miley Cyrus and Selena Gomez for the tweens, and movies like “Toy Story” for every moment in between.

Disney is barely present in the nursery. The media giant is looking to the Web to change that fact in a big way with its newly launched Disney Baby, a Web destination that blends commerce and social media with a dose of editorial.

That move follows the company’s acquisition of the edgy, urban parenting site Babble.com in November. Babble is known for decidedly un-Disney fare, like “Why My Son Isn’t Circumcised.” And coming soon, Disney will relaunch BabyZone.com, the content site aimed at new moms, which Disney snatched up as part of its deal to purchase Kaboose in 2009.

Under the leadership of co-presidents Jimmy Pitaro, who joined Disney in 2010 after running Yahoo’s media businesses, and John Pleasants, Disney is focused like never before on the demographic of parents of children under three.

“If you look at our history, we’ve always spoken to parents through their kids. Now we’re speaking directly to parents as parents,” said Brooke Chaffin, svp of Disney’s interactive moms and family unit.

Babies are a lucrative publishing market. The leader in the category is probably BabyCenter. There are also loads of medical-based sites and blogs.

At the heart of Disney Baby is a new feature called Disney Baby Magical Moments, which evokes Facebook’s new Timeline feature, only it’s designed to chronicle babies’ lives. Users, or guests as Disney calls them, can upload photos and provide commentary and share memories of key moments in their kids’ development. They can also connect with other parents going through similar parenting stages.

Rather than rely purely on standard advertising, Disney is billing Disney Baby as a central shopping hub, which is not an easy trick. Do people want to mix photos of Junior’s first steps with shopping for strollers? At launch, Kimberly-Clark’s Huggies is Disney Baby’s core sponsor, and Huggies products will be featured throughout the site.

“We think that parents talk about what they are doing in a given day [and that’s when they think about products for their kids],” said Chaffin. “So you’ll see harmony between content, social engagement and product. A lot of content sites have added commerce. We said let’s build it that way from the ground up. It’s a product-based platform.”