Digiday Research: Publishers will fight for programmatic talent in 2019

Even as many publishers look to cut costs and downsize their staff, over half of publishers say they’ll grow their investment in personnel related to programmatic advertising sales in 2019.

Fifty-four percent of publishers that sell advertising programmatically say they intend to grow their spending on programmatic ad talent next year, according to a survey of 187 publishing executives conducted by Digiday this November. A significant amount — 42 percent of respondents — said they are making no major changes to what they allocate towards programmatic personnel next year.

One telling sign of how prevalent programmatic ad buying has become across the industry: only four percent of publishers in the survey said they would decrease the amount they spend on programmatic talent in 2019.

Overall, 2018 saw cutbacks and increased consolidation across the digital media landscape as venture capital money ran out and publishers faced the hard realities of what it takes to run a sustainable media company. Refinery29 and Vox laid of staffers while Vice instituted a hiring freeze after it missed revenue targets. Mic and LittleThings imploded and sold for a fraction of their former valuations, and 2019 is shaping up to bring more of the same.

Publishers deciding to spend more on programmatic talent — particularly programmatic sellers — is in itself a cost-cutting measure of sorts, as both publishers and ad-buyers chase technology-enabled efficiencies. “A lot of legacy sales team are contracting and a lot less manpower is needed to sell programmatic than direct,” said Michael Giunta, vice president of recruitment at AC Lion, an executive search firm that specializes in working with publishers and ad-tech companies. “Where you would hire 10 sellers to do direct sales, now a publisher can have one or two programmatic sellers and four direct sellers.”

Meanwhile, as industry consolidation continues, publishers are dependent on programmatic advertising for growing chunks of their revenues even as platforms like Facebook, Google and Amazon suck up the majority of digital ad spending.

Some say that increased publisher reliance on programmatic revenue streams may not necessarily be inflating the compensation of employees in the field, however, as more ad sellers learn the ropes in programmatic. 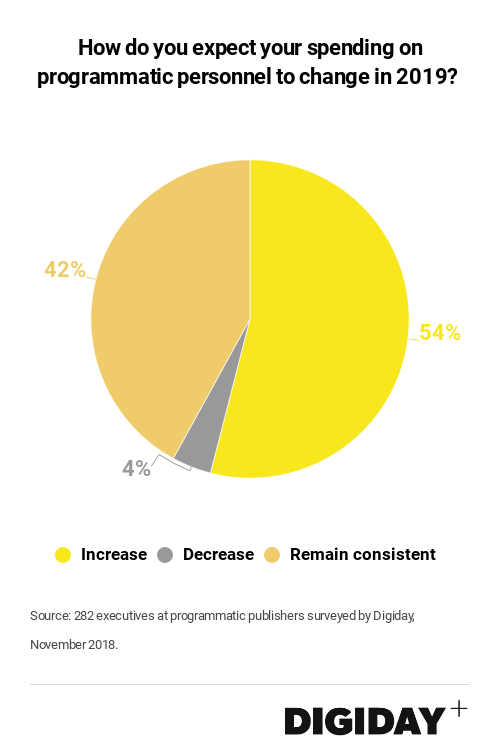 Outside factors like fresh competition for talent might also influence whether a company is forced to spend more on programmatic talent. One anonymous New York City-based publisher told Digiday that it was figuring out whether it should give employees a raise in an attempt to fend off companies such as Amazon from poaching their people. The online powerhouse it expected to staff up with ad-related staffers to launch its new Long Island City office in 2019.

Publishers also need to be cognizant that they are not just competing with the likes of Amazon or other publishers for programmatic talent. Certain programmatic roles, like ones that manage direct relationships with agencies and DSPs can also overlap with demand from other agencies or vendors. For example, someone at a publisher responsible for encouraging private-marketplace spending directly from an agency could be highly sought after by a DSP seeking those same ad dollars.

This raises the important issue of employee retention at publishers. Hiring and training programmatic talent is expensive, and having to do it repeatedly when employees leave in a matter of months can become a frustrating process. It becomes even more costly when publishers are forced to rely on recruiting agencies who typically charge between 20 and 30 percent of a hire’s first-year base salary. If publishers fail to ensure they keep their programmatic talent, they may ultimately be forced to spend more to attract new talent anyway.