Publishers face many challenges when it comes to programmatic advertising, but the biggest is still the downward pressure it can place on their ad prices, according to Digiday research.

Digiday polled 185 publishing executives about their biggest concerns regarding programmatic ad selling, and 30 percent highlighted downward pressure on ad pricing as their primary concern. Respondents also pointed to latency problems and a lack of transparency with vendors as other key concerns.

In the past decade, programmatic advertising has allowed advertisers and publishers to buy and sell ads faster and more efficiently than ever before. But since its inception publishers have fought back against the negative effects the technology can have on their ad prices, with many arguing it’s resulted in a “race to the bottom” for the value of their inventory.

Programmatic can depress ad prices in a number of ways, including offering buyers access to an excessive supply of inventory, advertising fraud, high take-rates by vendors and middlemen, and the growing dominance of largely fueled platforms such as those operated by Google and Amazon.

As a result, publishers in recent years have adopted various tactics and new technologies in an attempt to maintain their ad prices. The introduction of tactics and technologies such as header bidding, ads.txt, private marketplaces and first-price auctions have all helped prop up publisher CPMs, but many publishers say they’re constantly having to run faster just to stay still when it comes to programmatic revenues.

But the reality is that many publishers have little choice in the matter. Advertisers and agencies increasingly expect to transact with publishers programmatically and are actively diverting more of their ad budgets to programmatic channels. Programmatic advertising will be responsible for nearly half of the $107.3 billion that will be spent of digital advertising in the U.S. this year according to eMarketer, and most publishers have little choice but to accommodate if they want a piece of those budgets. In a separate Digiday survey of 281 media buyers, 74 percent said they plan to increase spending on programmatic advertising in 2019. 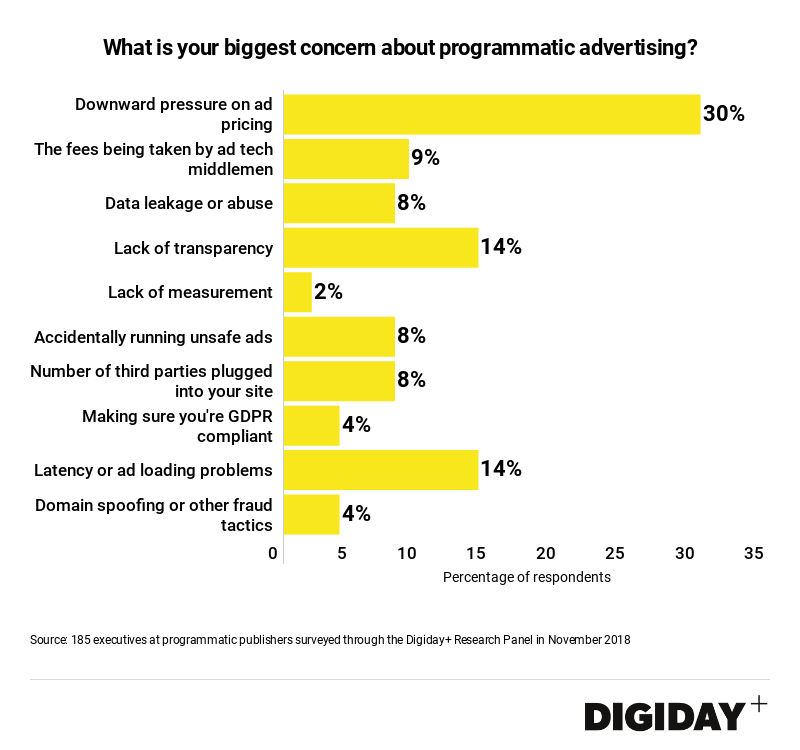 Part of the problem according to Jason Fairchild, Chief Revenue Officer and co-founder at OpenX is that publishers are working with are working with too many supply-side platforms. He said, “If a publisher is working with 20 vendors to represent their inventory in exchanges, buyers sees a glut of supply from the publishers, that can turn into an availability bias against them.”

Fairchild added that because buyers see an excessive amount of inventory from a publisher, that leads them to lower their value of that impression due to the perception that because a publisher has so much available inventory it’s not that valuable or sought after.

Publishers have begun to take greater control of their inventory and are increasingly looking to forge direct relationships with advertisers, while demanding greater transparency from their vendors in an attempt to ensure their inventory is priced fairly and is not susceptible to shading practices like bid caching. Other publishers have accepted Fairchild’s view that fewer vendors are better and have begun reducing the number of partners they work with and some are already seeing ad revenues rise as a result.

Programmatic pricing impact of publishers inventory means that the goalposts for profitability are moving farther away for many publishers. Until those goalposts stop moving it could likely that pricing will remain a top concern of programmatic advertising by publishers.