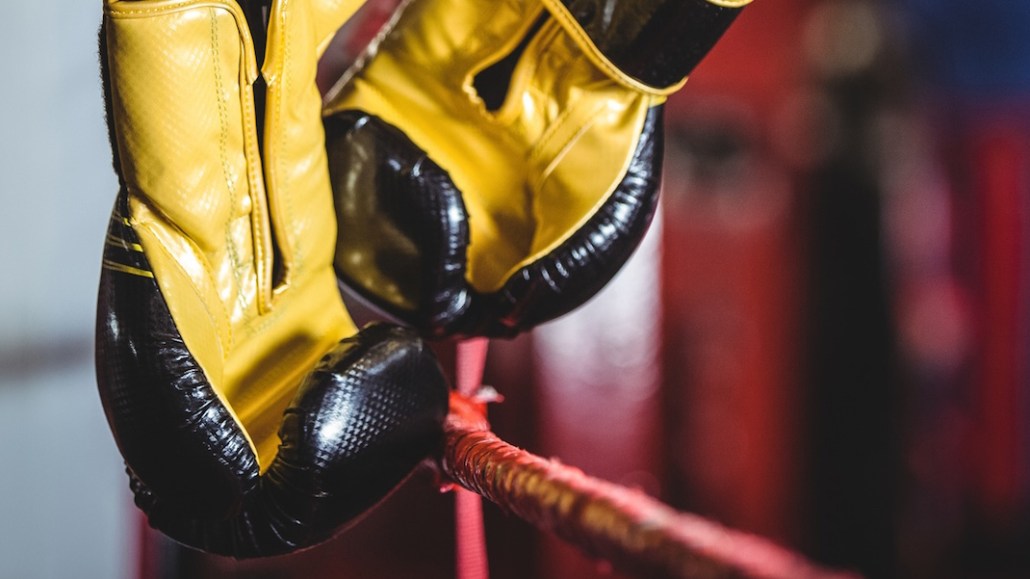 On Oct. 28, DAZN will debut the first of two Snapchat shows that it will use to promote a fight between professional boxers Canelo Alvarez and Sergey Kovalev on Nov. 2 and a follow-up match on Nov. 9 between YouTube stars Logan Paul and KSI.

“We want to reach new fans and make them aware of not just the amazing [fight] schedule that we have but also the talent of someone like Canelo and Logan. Snapchat provides that,” said Steve Braband, head of digital at DAZN.

According to Snapchat’s self-serve ad-buying tool, the app’s monthly audience of fight and wrestling fans in the U.S. ranges between 10.3 million and 10.7 million people.

The Paul-KSI fight, in particular, has the potential to increase DAZN’s subscriber base, given the YouTube stars’ popularity online. The first fight between the two that aired on YouTube last year and cost $10 to watch attracted 1.1 million viewers, according to the Washington Post.

DAZN’s first Snapchat show, “DAZN Fight Week,” will air weekdays and provide viewers with highlights from the fighters’ past fights and a behind-the-scenes look at the fighters’ preparations for Saturday’s bout. Three of the daily episodes will be edited versions of the documentary series “40 Days: Canelo vs. Kovalev” that DAZN has produced with LeBron James’ media company Uninterrupted and debuted on YouTube on Oct. 22. DAZN will replicate the show the following week ahead of the Paul-KSI fight.

For the Snapchat version of “40 Days,” DAZN will cut the roughly 10-minutes episodes down to between four and five minutes, which is the length that Snapchat’s team recommended, according to Braband, who had previously worked on the Snapchat version of ESPN’s “SportsCenter.” It will also reframe the show from horizontal to vertical and use the multi-box format that puts different shots on-screen side-by-side. Braband said formatting the show in this way “allows us to get closer to the fight.”

DAZN’s second Snapchat show, “DAZN Fight Night,” will air on Nov. 2 and feature highlights of the fight as it is going on. For that show, DAZN will have members of its social team on scene at the fights capturing footage, along with a team in New York that will be clipping footage from the broadcast feed and editing them before adding the highlights to the “DAZN Fight Night” feed.

Snap is not paying DAZN to produce the shows. Instead the companies will split the revenue from the ads that both Snap and DAZN sell against the shows, with each side receiving a 50% cut of that ad revenue.

DAZN stands to make more money from the Snapchat shows if they are able to entice people to pay $20 a month or $100 a year to subscribe to DAZN in order to watch the fights. That’s largely the point of producing these shows.

DAZN may have a hard time getting people to subscribe to its service directly from the Snapchat shows. Companies are not able to attach links within the editorial content of their shows, according to a Snap spokesperson. However, DAZN would be able to buy ads on Snapchat that retarget viewers who have tuned into its channel.

A DAZN spokesperson declined to say how many subscribers the service has, what its revenue is and whether it is profitable. Forbes has estimated that DAZN has more than 4 million subscribers, and DAZN evp of North America Joe Markowski said in May that the number is “on the positive side of that,” according to FierceVideo.

While the number of subscribers DAZN stands to attract from its Snapchat shows may be capped by the service’s decision to stop providing a free-trial period, that’s not necessarily a bad thing. Requiring people to pay instead of allowing them to try out a service for free forces people to make an informed decision and can help to mitigate immediate churn, according to Patrick Crakes, a former Fox Sports exec and principal of Crakes Media Consulting.

Additionally, even if a number of the new subscribers that the two November fights attract don’t stick around until December for the next fight on DAZN’s schedule, they may be more likely to sign up again the next time there’s an Alvarez fight. “Let’s say Canelo fights two or three times a year; that’s $40 to $60 that they wouldn’t have had,” said Crakes.

https://digiday.com/?p=350787
Most Read
Trending in Publishing in the Platform Era
Digiday Top Stories