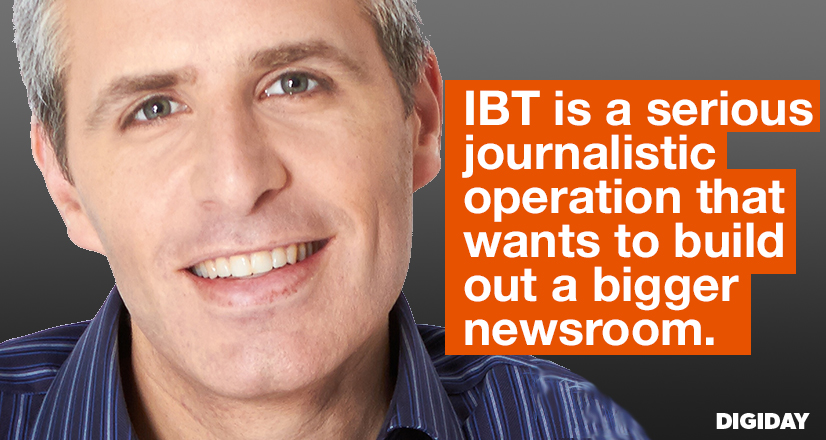 David Sirota, the syndicated columnist and author, has joined International Business Times as a senior writer, focusing on the intersection of Wall Street and politics, IBT is announcing today.

Sirota himself was in the news last month when he was abruptly fired from Pando Daily. At IBT, he joins a growing editorial bench, which now includes global editor in chief Peter Goodman, Marcus Baram, both ex-Huffington Post; Nancy Cooper (formerly of Newsweek and WNYC) and Laura Hibbard (ex-Time, Huff Post).

Sirota talked about his plans to help establish IBT as a place for hard-hitting reporting.

A lot people never heard of IBT until they bought Newsweek last year. What’s your sense of IBT and its journalistic mission?
I think they’re a serious journalistic operation that wants to build out a bigger newsroom. There’s a lot of talk about a journalism bubble. They’ve been around a long time and are slowly but surely increasing their capacity. There’s less of a flash-in-a-pan feeling. They have a very clear sense of what they have to do business-wise. The people they’ve hired, like Peter, are not only supportive of investigative journalism, but that’s what they do.

There’s been some coverage of the parent company’s owners’ religious ties. Do you have any concerns about their editorial independence?
I am confident there is a real journalistic independence. I did my own due diligence, talked to people who have worked with their editorial team with the new Newsweek. They know what I do; they know my work very well. Peter and I had this very intensive back and forth. They want me to continue to do and expand on what I do.

We’ve seen some well-known journalists striking out on their own. How big is the opportunity to do that versus being associated with an established brand?
I think when you’re doing investigative journalism in particular, it really helps to be working with an institution. It takes a lot of effort and resources to do that kind of reporting. In this so-called journalism bubble, I do think there’s this desire to do analysis of other people’s original reporting because that’s an easier endeavor. I think the tradeoff is, those models won’t necessarily do something lasting or something of value.

You’re well established yourself, but given IBT’s low profile so far, do you think it’ll be hard to get access?
Pando was not a known entity at all and I was still able to report out the stories I wanted to in the political and financial realm. IBT, they’ll have no problem with that as well. One thing I’d say about this era is, if you do good reporting, you can establish yourself much more quickly.

It was suggested that you were fired at Pando because of complaints from investors that there was too much politics coverage and not enough tech. What happened?
I don’t really have a comment on the reasons of what happened, because I don’t have any information about it. They were extremely supportive of my work that I did with them, and it was pretty abrupt, in that there wasn’t any real warning. But the bottom line is, they were very supportive of my work, and I wish them well.

It must be frustrating to still have questions.
I mean, yeah. It was a surprise to me, and anytime a situation happens like that, it’s not particularly pleasant to go through. But this is the media business. It’s unpredictable.