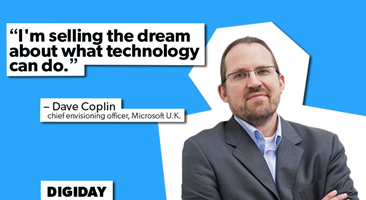 Forget about getting into shape after the holidays. Digital dieting is the word on everybody’s lips. It’s among the top 10 industry trends outlined in design company Fjord’s 2015 predictions, which makes sense since media critic Michael Wolff has described the Web as a “deluge of crap,” business psychologists are discussing “the distraction economy,” and HR professionals are exploring the cost to employee well-being.

Microsoft U.K.’s chief envisioning officer Dave Coplin is among those who consider this a big problem, but he’s a little more optimistic about our ability to solve it. The need for a more mindful approach to technology is a topic he explores in his book “The Rise of the Humans: How to Outsmart the Digital Deluge.”

In a conversation with Digiday, Coplin explained how he’s trying to help people overcome the problem of digital distraction, and why this issue matters to marketers as well as ordinary Web users. Excerpts:

What kind of problems are constant connectivity and distractions causing?
Not only does multitasking make us about a third less efficient, it also introduces a really large delay in the work that we’re doing. When we get distracted, there’s a massive time lag, up to 20 minutes or more, between the completion of that distractive activity and getting back to the level of focus we had on the original task. But the problem is much broader than that. The net effect of our inability to navigate through the digital deluge is that we deprive ourselves of the physical and mental space needed to generate ideas and innovation.

But doesn’t technology improve productivity?
Productivity was first defined as creating things, but it has since been co-opted as this cold process which measures the rate of output per unit of input. Technology has led us to obsess more over the process of creating things, like email, more than the actual creation of things. The book talks about making positive, mindful choices about technology to help us achieve proper productivity, not inbox zero.

What segment of the population is this really a concern for?
There isn’t conclusive evidence to say it’s entering mainstream consciousness just yet, and I accept that it’s hard for me to be objective as someone who has become so aware of it. That said, in 2014, we definitely saw a big increase in the number of articles talking about this issue in mainstream media. Some of what’s been written about it, such as the idea of digital detoxing, has been BS, at least in my opinion. We’re not talking about abandoning technology. Instead, we’re talking about the appropriate, mindful use of technology. But all of these little signals suggest the public is beginning to understand this is an issue.

How do you get the balance right?
Some of it’s pretty obvious — turn off your notifications, shut out distractions, etc., but it’s important to deliberately carve out some down time. Work-wise, if I’ve got some proper work to do, the last place I’m going to do it is the office or even at home. I’ll go to the library or somewhere I’m not going to be disturbed. Microsoft is great, and it gives us the freedom to do that.

One of things I normally do at Christmas is turn off the email notification, which shows the number of unread messages I have. Otherwise, when I pick up my device to do something, the temptation to deviate from the original task and check my emails is usually too great. I’m sure we all do it.

Are you going against the party line by writing about this stuff?
I’m not selling our products, I’m just selling the dream about what technology can do, and as a result of that, you get to have different kinds of conversations with different kinds of people. My normal day job involves working with the advertising team at Microsoft and helping people understand the future of advertising. What we increasingly found was we weren’t having all of the right kinds of conversations with clients. We were talking about our products, but we weren’t lifting the conversation up a level to ask what this kind of technology is really for. That’s when I started writing about technology and evangelizing in a more technology-agnostic way. 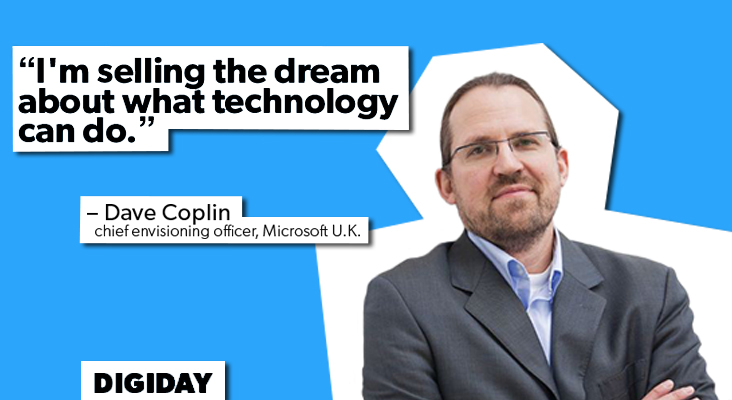 How could this trend affect the future of advertising?
I think the future will be about targeting smaller audiences and delivering something that’s highly valuable to them, rather than throwing as many ads as we can at as many people as possible. Over the next five to 10 years, the opportunity is there to move away from the scatter-gun approach and produce stuff that’s really in tune with the individual. There are clearly some big hurdles in the way of getting there, such as providing a strong the value exchange in and being transparent about how we use people’s data.

The big thing that’s really changing things is intelligent assistants: Google Now, Microsoft’s Cortana, Apple’s Siri. These give us the opportunity to move marketing towards a real-time, predictive world, but they must do so in a way that’s mindful of privacy and respects the consumer.