DailyMail.com editor: ‘Figuring what will do well on Facebook is such a crapshoot.’ 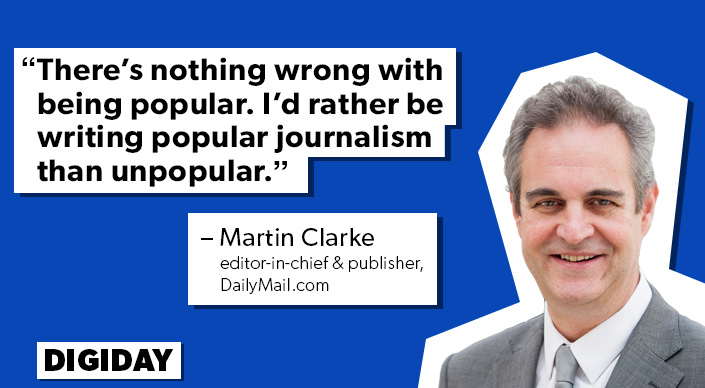 Martin Clarke is a busy man. He serves as both editor-in-chief and publisher of DailyMail.com, while splitting his time between London and New York, with regular trips to Sydney thrown in.

Last week marked a significant milestone in the celebrity news-driven site: It dispensed with the MailOnline brand to be simply DailyMail.com in the U.S. market. (It will retain Mail Online in the U.K. in order to differentiate the site from the newspaper.)

Clarke discussed with Digiday the change and his views on the state of digital media heading into 2015.

With Mail Online, Daily Mail and DailyMail.com, is there any risk of brand schizophrenia?
When we launched in the U.K., we called it MailOnline for two reasons. We have a Daily Mail newspaper and Mail on Sunday paper. We wanted a brand that covered both. As time went on, it helped differentiate the product from the paper. In the U.K., ordinary readers distinguish between the two. The U.S. wasn’t on our radar in 2007 and 2008. We had no idea we were coming here. We discovered that in the U.S. people refer to us as Daily Mail whether we like it or not. People were confused. We decided to lean into it.

Has the Daily Mail adapted to digital better than most newspapers?
It comes down to one thing: We never took our newspaper staff and asked them to produce a site as well. From the beginning, the digital team was set up separately. I had my own autonomy. I could mix and match content for online. We were able to evolve the product and the team for the digital environment. We’re much closer to a digital pure play like HuffPo than any newspaper in the world.

So what’s your approach been to the Sony emails?
We haven’t gone after it. I’m not into trawling stuff that’s been dumped on the Internet by a bunch of pirates. But once it’s out there and there’s a public interest in it, we will cover that. I think there is. If you were to start reporting private medical details and private details, that’s totally out of order. I don’t see anything that’s crossed the line. If you have execs emailing off-color comments, that’s fair game.

Were you surprised Sony caved?
I was. It’s one thing to say, “OK, we have no choice because none of the theaters will show it.” But there’s a point in principle even if you show it in one theater. I was very surprised.

What do you make of the idea that media companies are now tech companies?
We’ve never banged the drum about our technology. We have a content-management system that allows us to produce a website different from everyone else’s. We can reinvent and evolve it. We have real-time data analysis that’s a priority. Are we going to sell it? No. We’re a content company. That’s what we’re good at.

Facebook’s driving a ton of traffic to publishers. Do you end up thinking from the start how content will travel on Facebook?
No, never. We edit exclusively for the homepage. If it’s a marginal story and you think it’s got some social legs, it might tip the balance. Quite frankly figuring what will do well on Facebook is such a crapshoot. That’s a silly way to edit.

What’s the optimist’s take on the state of media?
I’m not sure there is one. Online media is a simple equation. You have to be very big like us and HuffPo and BuzzFeed, where you do upmarket content and have lighter stuff like show business and listicles. For that you need scale. Or if you want to be pure, just the upmarket content and fill that niche, then you have to charge. Quite frankly there’s so much fantastic upmarket journalism available now from so many sources. I love reading news and current affairs. I could sit here all day and read great articles and not spend a penny.

Are native ads a savior or a flash in the pan?
In one way, there’s nothing new about them. I laid out advertorial in papers 20 years ago. It’s just an evolution of that. The main difference is in print you put it in there and nobody figured out if anyone read it. In digital, it’s obvious if people read it. It’s a growing revenue stream for us. The key is being transparent with the readers, so it’s obvious when something is paid. It isn’t going to be the silver bullet. There are none in any business, especially media.