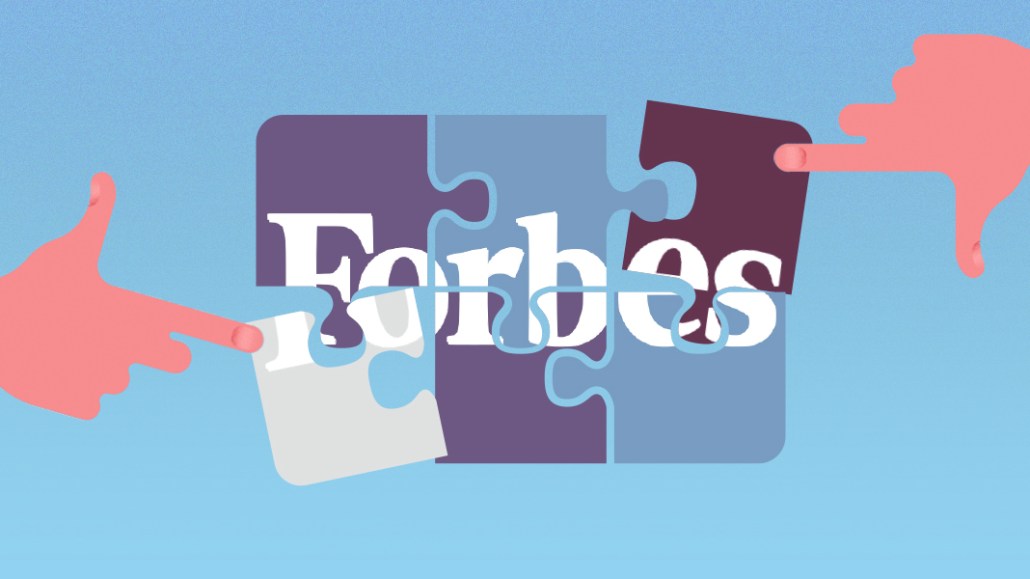 Forbes announced this morning that it is going public via a special purpose acquisition company (SPAC), making it the latest media company looking to grow its businesses through the support of a shell company.

The SPAC is sponsored by Magnum Opus, a blank-check firm based in Hong Kong that went public on the New York Stock Exchange in March. The deal values Forbes, a 104-year-old company, at more than $600 million. Unlike BuzzFeed and Group Nine, which announced SPACs in the past year, the plan is not initially aimed at acquiring other media companies but focused on producing more consumer products to sell to people, according to Forbes CEO Mike Federle.

“The time is really right, right now, for what is a bold move to go into the public market,” Federle said.

Per the investor presentation, Forbes currently has 23,000 subscribers and aims to eventually attract more than 1 million subscribers, though the company did not provide a specific timeframe for that goal. Another long-term goal is to reach more than 15 million registered users.

What the public money will be used for

Forbes wants to find opportunities from the content it publishes to launch consumer-focused paid products, in order to grow its consumer revenue from its current standing of 12% to eventually make up 38% of its business. Ad revenue will shrink from 65% of Forbes’ business to 45% (the rest will be made up of brand extensions).

That’s the idea, at least. Federle said this will take “several years,” but that “significant results” will take shape in 2023, as Forbes won’t be able to fully invest the public money it raises until sometime in 2022. “Consumer revenue is all additive to the ad revenue,” Federle said.

As an example of what the SPAC funds could be used to develop, Federle pointed to Q.ai, a company incubated and owned by Forbes and that is included in the consumer revenue category. The app uses AI technology to make investment recommendations. Forbes also licenses an online business school called the Forbes School of Business and Technology at the University of Arizona Global Campus. “We have given proof points where we can invest in companies that do very well… and we can enter into new markets, in education, investing, or even luxury and travel,” Federle said.

Another example is Profiles. Forbes’ “America’s Top Wealth Advisors” list ranks the top financial advisors in the U.S. The annual conference from that franchise generates several million dollars of consumer revenue, according to Federle. Forbes then created Profiles, a LinkedIn-style platform for those on the list, where advisors can pay for a premium listing on Forbes and can use it for their own marketing. Forbes’ tech team has built a series of tools to support Profiles as well.

What the public money will not be used for

M&A is not necessarily a focus of the SPAC, according to Federle. “We specifically kept it out of our investors plan as we talked to investors when we were raising the PIPE, because it is easy to say, ‘Hey we are going to do hundreds of millions in new acquisitions to generate hundreds of millions of revenue’ — but that doesn’t really happen until it happens,” he said.

Forbes needs to build a stronger infrastructure (both as an organization and as a tech platform) for acquisitions before it can start looking at what companies to buy and integrate, said Shahid Khan, a partner at management consultancy Arthur D. Little in its Telecommunications, Information Technology, Media & Electronics (TIME) practice. “Before you acquire other companies, you have to have your own house in order,” he said.

Why go the SPAC route?

Federle said a SPAC is the “most streamlined process to going public.” The benefits of going public are that it provides the cash needed to “enact our aggressive growth plan,” without having to take on any debt. No debt “allows us even greater leverage in the future as we look to acquisitions,” Federle said. SPACs are “a great way to raise capital, in a free manner.”

A SPAC is known for inviting less investor pressure compared to a traditional IPO. The shell company goes public with a promise to investors that it will eventually acquire and merge with a private company to take public, and serves as a way for a company to go public and begin selling shares on stock exchanges to raise money.

For every eligible company that a SPAC can acquire right now, there are six to seven SPACs chasing them in the telecommunications and media space, according to Khan. “It’s a big win for SPACs to get Forbes to join them and go public via them,” he said.

Forbes has been leading up to this moment for the last decade, Federle said. In the past 10 years, Forbes has launched a contributor network, added products like its content marketing platform BrandVoice and expanded popular franchises like “30 Under 30.”

Forbes has built out its technology stack and data and analytics capabilities to now be able to segment its audience into cohorts and create products and experiences specifically for these groups of people based on their interests, Federle said. “We intend to create a lot of consumer revenue. It’s not a hard paywall strategy, but a premium product strategy,” he said.

SPACs are all the rage among media companies recently. Amid the pandemic, investors are looking for opportunities for their money, and SPACs are proving to be a popular alternative to a more traditional IPO. BuzzFeed and Group Nine announced their own SPACs in the past year — both with the aim of acquiring more media companies. Bustle Digital Group, Vox Media and Vice Media are reportedly mulling over going public as well.

Digital media deals, in general, are closing as this summer nears its end. German publisher Axel Springer announced today it was buying Politico, with reports that the deal values the political publisher at over $1 billion. Nexstar Media acquired The Hill last week.

Forbes’ board of directors will have nine members, including Federle. As part of Forbes’ diversity, equity and inclusion initiatives, Federle wants “diversity on the board.” When asked if he had a certain goal in mind, Federle said he does not “believe in quotas” and that the board could be a mix of women and people of color.