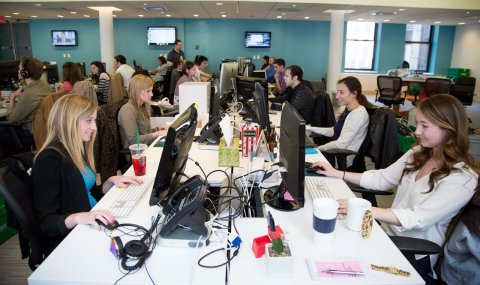 Flush with new funding, Business Insider is planning to launch a new site devoted to consumer technology that will attempt to expand its audience beyond business readers, Digiday has learned.

Executives at BI declined to comment on the record, but sources close to the project confirmed the publisher’s plans for BI’s first new standalone site. The site isn’t expected to launch until the third quarter, and, as such, it doesn’t have a name or dedicated staff yet. BI expects to use a mix of internal staff and external hires.

There’s been an explosion of tech coverage lately, with older verticals like Wired and PC Magazine and general news organizations like The New York Times joined by new, digital natives like The Verge, Gizmodo and Engadget. A new entrant will have to muscle its way into a crowded category, but Business Insider seems to derive confidence from its audience growth at the mother ship and from its homegrown content-management system, which it calls Viking.

Founded in 2007 as Silicon Alley Insider, Business Insider has grown into a 35 million uniques-strong site under CEO and editor-in-chief Henry Blodget. The site has an ostensible focus on business, but like other publishers that start out with a vertical focus, BI has broadened its editorial mandate in the quest for scale, giving rise to gems like “Scientists measured 15,000 penises and determined the average size” and “You’ve been loading your dishwasher all wrong.”

But apparently, that mandate can only stretch so far. BI wants to give the new site an entirely new name and identity separate from Business Insider. That approach is meant to underscore that this is a consumer play, while BI will continue to define itself as focused on business executives. Still, BI certainly does consumer-oriented tech stories, under its mantra that business people have many interests, such as politics, sports and lifestyle issues. Right now, BI’s tech coverage includes “How to supercharge your iPhone in just five minutes” and “I made 2 tweaks to my sister’s 2009 iMac and now it runs like a brand new machine.”

As for the spinoff site, a knowledgeable source said the editorial formula was still a work in progress but suggested that content would center around “life hacks” and solving common tech problems for consumers. “It’s geared toward business executives,” the source said. “We need to maintain that. We can only stretch this brand so far before the business part of it becomes nonsensical.” BI hopes the consumer tech site will be the first of other spinoffs but hasn’t committed to any specific plans yet.

Brian Ko, managing partner for digital at the media agency MEC, said BI has done well at differentiating itself in the business-news category with quick hits for the digital age, and a consumer site could leverage its success with lifestyle news. “It’s never an easy category to come into, but they’ve had great success with what they do. They told me, when they added lifestyle to their site, their traffic just blew up.”

And lifestyle content can be a good complement to straight business news on an ad plan, Ko said. He noted that when he’s bought advertising that way, the engagement and brand lift around the lifestyle content is higher because the consumer is more passionate about the content.

Lesley Pinckney, vp of digital at Walton Isaacson, said consumer hack-type content is more evergreen than news and a natural way for BI to broaden its ad base, à la Mashable.

“Mashable started as a tech platform and quickly realized they were being shut out of a lot of the media and ad sales conversation,” she said. “So they expanded their voice to be a Mashable point of view on a lot of things.”

BI’s launch plans are being hatched just as the publisher raised $25 million in funding from a group of investors, which is led by German media company Axel Springer and includes Amazon founder Jeff Bezos. Business Insider makes money from industry conferences including Ignition and BI Intelligence, a subscription-based research unit.

But most of BI’s revenue comes from digital advertising, and it relies largely on a native ad model that faces scalability and proof-of-performance questions from advertisers. BI has also said it would use the new funding to expand its digital video, which tends to capture higher rates than display advertising. Its video views over the past year have tended to range between 1 million to 2 million per month, per comScore.

One booster who thinks BI will do well with the site is John Battelle, who was behind Wired and The Industry Standard.

“They crank out a lot of editorial, they understand how to acquire an audience, and [Business Insider CRO and CNET vet] Pete Spande is intimately familiar with the consumer tech market,” he said. “I think it would be pretty cool to rethink how to make a consumer tech publication for today where you’re not dependent on legacy relationships with old-school vendors like Microsoft and HP.”