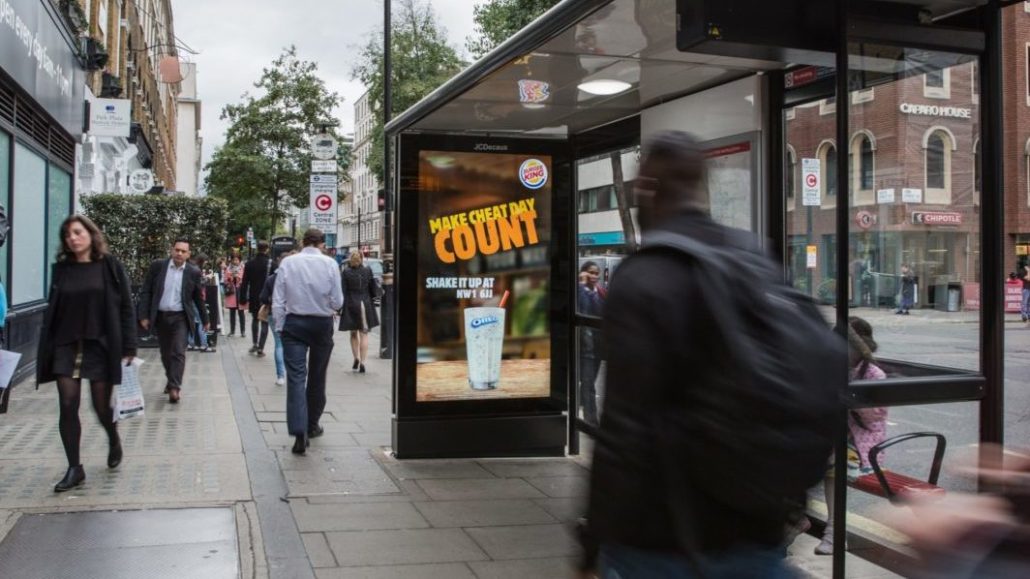 Burger King is testing how its outdoor ads can be changed on the go to have the biggest sales impact.

The fast-food restaurant is wading through analytics for 30 different ads created by 360i and bought by Vizeum that ran on 100 billboards over the course of a week in October. Each billboard was near one of 13 Burger King restaurants across London, and the creative changed dynamically in response to time of day, proximity to a local event and the weather to push people to their nearest Burger King during quieter sales periods such as breakfast, snacking and late night.

Until recently, outdoor advertising hasn’t been able to quantify the audiences it has delivered. Over the last year, however, outdoor media owners such as JCDecaux, which worked with Burger King on the campaign, have started letting brands plan and buy more contextually to a targeted audience.

Burger King measured pre-, during- and post-campaign foot traffic using beacons installed in its restaurants to isolate the campaign’s impact on each location’s foot traffic. The beacons tracked the number of Wi-Fi engagements with Burger King diners as they entered stores, recording a cumulative number of increased visits tied to devices rather than personal information. For example, a series of ads promoted the restaurant’s breakfast and midmorning products and consequently delivered an increase in visitors to Burger King locations during those periods.

Burger King would not share further details about the test so soon after it had concluded. But Renato Rossi, Burger King’s vp of marketing in the U.K., told attendees at Ad:tech London earlier this month that the initial metrics had proven “streets can be a lot more connected to our digital environment.” Speaking to Digiday at the event, he admitted the mix of data on foot traffic and sales might not be the clearest attribution model but said it was a start to understanding the path to purchase from its outdoor ads. The business will evolve the model in 2018, he said.

“We’re not going to suddenly stop buying static ads. If we get the current [outdoor advertising] investment we do today and translate 100 percent of it in [digital-enabled outdoor ads], we would lose too much coverage, which we can’t afford,” Rossi added. “This isn’t yet a full migration from static to digital. Both will coexist for the coming years.”

At the start of 2017, just 2.5 percent of all digital out-of-home campaigns with JCDecaux ran dynamic ads, but by the end of the year, that percentage will have quadrupled, according to the media owner. In fact, 2017 will be the first year where revenue derived from digital will overtake static, traditional media at JCDecaux.

Rossi’s pragmatism aside, the marketer believes outdoor media can prompt direct action from people and become more accountable in the process. He and his team are considering buying impressions for dynamic billboards upfront that they can allocate over the course of the year to specific locations they want to try and increase sales to. Traditionally, a business like Burger King would have campaigns on a certain number of static panels per restaurant live all year, but there would be limited flexibility in how the media buy is matched to the specific needs of that location.

Outdoor media is Burger King’s second-biggest media outlay after TV, yet it’s one of the most restrictive channels, Rossi revealed. He added that having a static message on a billboard that can’t change for two weeks means those ads have reverted to “lowest common denominator” product promotions that are “attractive to the majority but not relevant to anyone.”